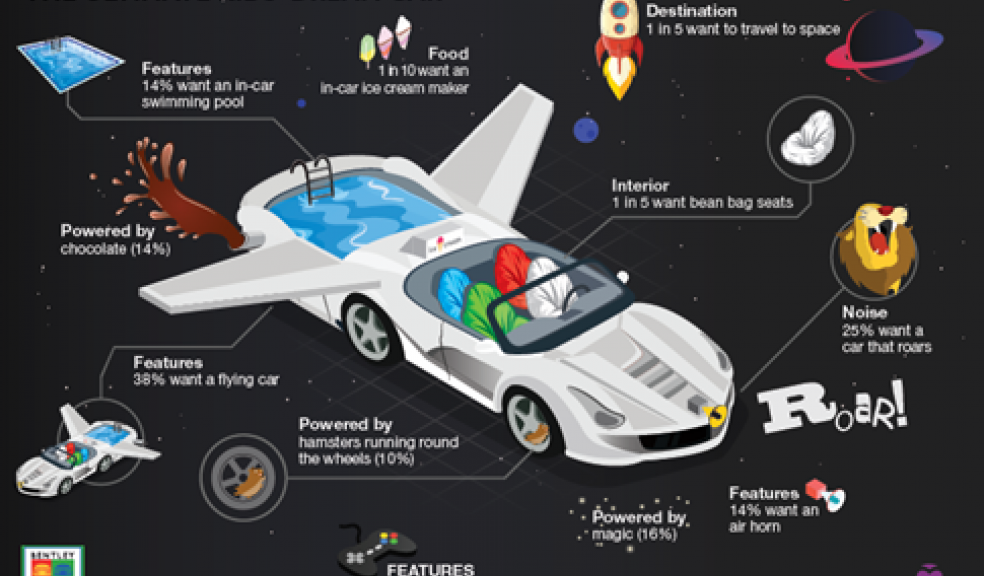 A roaring, flying machine powered by magic and kitted out with a swimming pool and sweets machine is how kids in Exeter have described their ultimate dream car.

Although adults may long for a car with an inbuilt touchscreen navigation system, Bluetooth connectivity and all-wheel drive, when it comes to vehicles children are a much tougher crowd to please. A recent poll commissioned by the Bentley by Me campaign asked 1,000 children across the UK aged between 6 and 12 what their dream car would be like – and the results are out of this world.

For over a third (37 per cent) of children in Exeter, their ideal seats would be made out of beanbags, while 17.1 per cent would like to sit on marshmallows and 7.9 per cent would feel most comfortable sat on clouds.

In case other road users were worried about spotting this new generation vehicle, they needn’t be as the majority of children want their dream car to be either multi-coloured (21 per cent) or fluorescent pink (a further 9.2 per cent).

As well as being able to see the car coming, you’ll be able to hear it too – with a quarter of respondents saying their car’s horn would make a roaring noise, like a lion. A further 11.8 per cent would select an elephant’s trumpet to alert other road users and 11.8 per cent would choose an air horn.

Of course, being under the legal age to drive children would have a chauffeur to ferry them around – and for once, it’s not their parents. One in five children in Exeter said they would like a minion to drive their car, 14.5 would like a robot and 5.3 per cent would like Elsa from Frozen behind the wheel. And where would they drive to? Well, a third would go to Disney Land and a quarter would travel to the moon or space.

The survey results have been released to mark the launch of Bentley by Me, a new and ambitious initiative organised and run by The Care2Save Charitable Trust and Bentley Motors to raise money to transform palliative and hospice care around the world. For a donation of just £1, people will be entered into a prize draw to win a Bentley Continental GT V8, which they will be able to make into their own dream car by personalising it with their choice of exterior colour and interior finish from Bentley’s extensive colour palette.

“Although the lucky winner of our Bentley by Me campaign won’t be able to install a swimming pool or marshmallow seats into their new vehicle, we hope we’ve given people a little inspiration around what their own dream car might be like,” said Andrea Ladeira, the founder and CEO of The Care2Save Charitable Trust. “Although we had great fun asking children to describe their ideal vehicle and the campaign is a brilliant opportunity for someone to win their very own dream car, there is a very serious message behind all of this.

“Palliative care provides pain relief, comfort and support to people who have serious or terminal illnesses and those close to them. In the UK, we’re fortunate to have the best palliative care in the world – but this is very rare. Each year, 40 million people of all ages around the world will need palliative care – but 34.4 million won’t receive the care they need. The Care2Save Trust and Bentley Motors have teamed up because we want to address this global issue and make a significant impact on the lives of thousands of people in need of help.

Through the Bentley by Me campaign and the generous support of people around the globe, we have the opportunity to raise a significant amount, which will be able to drastically improve palliative care for those who are in desperate need of it. For as little as a £1, you can make a real difference and to show our appreciation you’ll also have the opportunity to win a unique prize.”

Using the money raised from the Bentley by Me campaign, The Care2Save Charitable Trust will work with organisations and charities in other countries to educate and empower them to build their own sustainable and affordable hospice and palliative care models.

The Bentley by Me campaign launches on 15th February 2015 and will run until 14th August. Please visit www.care2save.co.uk/Bentley for full details and terms and conditions.