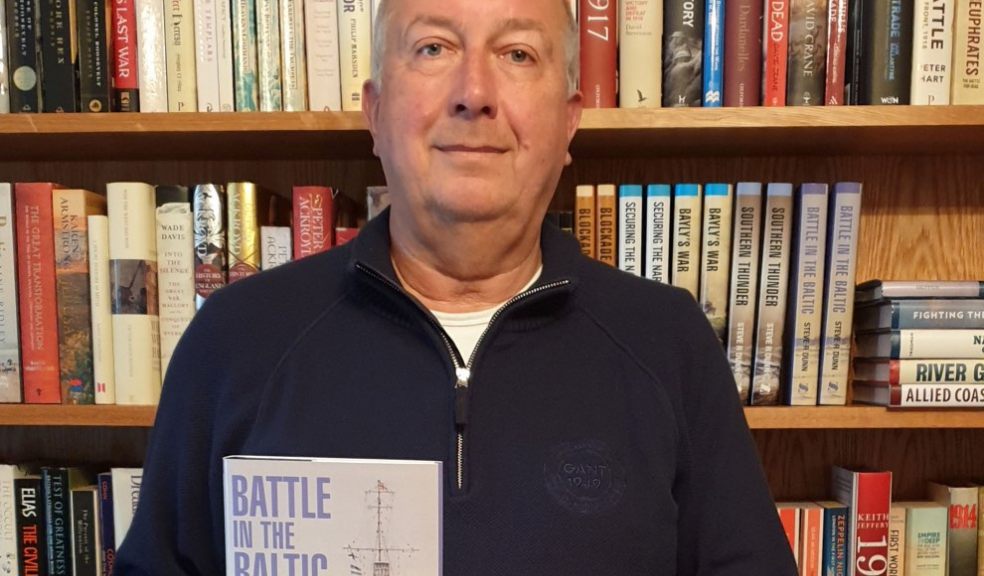 The role of an Exeter-born Royal Navy Lieutenant in helping to protect the fragile independence of Estonia and Latvia at the end of WW1 is one of the personal stories featured in a new book that’s published next month.

Battle in the Baltic, by author and naval historian Steve Dunn, turns the spotlight on the almost forgotten story of the navy’s 13-month brutal conflict in the Baltic Sea.

At the time, neither the British Government nor the public had any real appetite for the campaign but Secretary of State for War Winston Churchill was determined to stop Bolshevik Russia retaking the new Baltic countries.  And so the Royal Navy despatched a sizeable operation to the Baltic, including 27-year-old Gordon Steele.

So instead of celebrating the Allied victory at home, Lieutenant Steele, who was second in command of a Coastal Motor Boat (CMB), found himself fighting Communist sea forces and delivering vital support to independence fighters. Key to the success of the campaign, which ended in February 1920 when a treaty was signed, was the raid on Kronstadt.

Despite the action being extremely risky – not least because the CMB was heavily outgunned by the massive firepower of the Russian warships - his commanding officer, Lieutenant A Dayrell-Reed, entered the harbour but shortly afterwards he was killed by a shot to the head.

As the boat weaved off course, Steele, realising what had happened, took the wheel and steadied her. He managed to manoeuvre the vessel into a position suitable for launching torpedoes and successfully hit two Russian ships before making a rapid retreat from the harbour, thus saving his ship.

As a result of his action, he was awarded the Victoria Cross. His citation said ‘for most. conspicuous gallantry, skill and devotion to duty on the occasion of the attack on Kronstadt Harbour on the 18th August, 1919’.

“This was a story I felt it was important to tell because it reminds us all how we need to stand up for democracy,” said Steve. “Thanks to men like Steele these fledgling democracies were protected.”

Steele’s bravery was also one of the reasons he found himself the subject of the BBC TV programme This is Your Life, hosted by Eamonn Andrews.  He died in 1981, aged 89, and is buried at All Saints New Cemetery in Winkleigh, Devon, where there is a small memorial cross in his remembrance.

Not surprisingly, Baltic in the Baltic, has already come to the attention of the Latvian Embassy. Steve has been invited to address Her Excellency Ms Baiba Braže and her VIP guests as part of the official launch in March.

“It’s a real honour for me to have been asked to give a talk at the embassy and have the opportunity to discuss my book. I hope I have done justice to what is such as critical time in Latvia’s history.”

Battle in the Baltic is Steve’s eighth book. Two of his previous publications were shortlisted for the prestigious Mountbatten Maritime Award, which is presented annually to an author who has made a significant contribution to the UK’s maritime history.