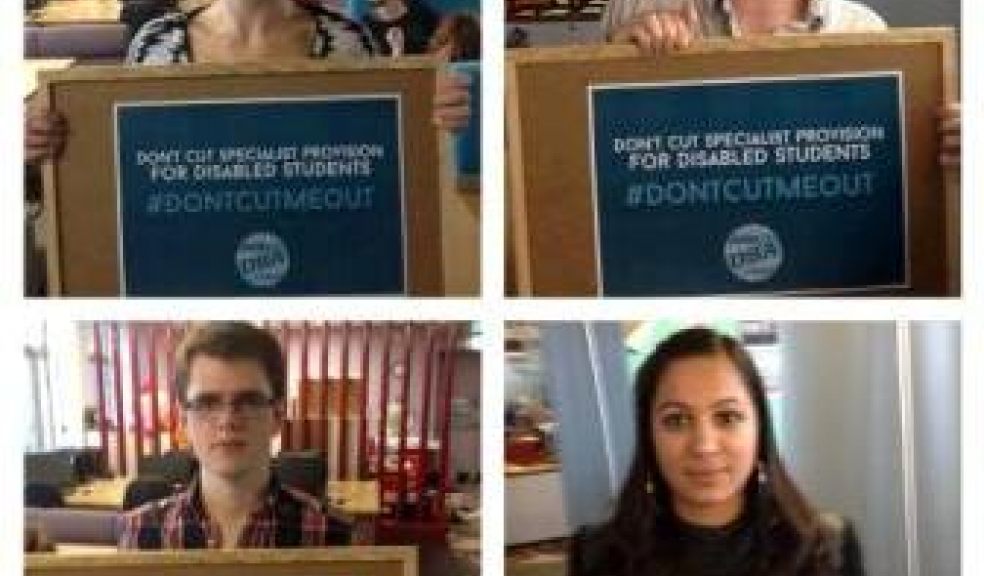 Students from University of Exeter are taking part in a day of action today in order to protest against controversial cuts they believe  could “disproportionally impact” students with disabilities.

Exeter students are joining with students from universities across England to protest as part of a national campaign led by the National Union of Students (NUS) against cuts to the Disabled Students Allowance (DSA).

The DSA cuts come under plans the government say will “modernise” the allowance and see individual universities pay more towards supporting students with disabilities.

In a statement on their facebook page Exeter students explain their reasons for taking action, they write: “Considering the increasing number of students requiring alternative provisions, and the recent increases in demand for wellbeing services, the Students' Guild is concerned that this cut is completely out of touch with the national picture of disability.

“We are also concerned that the University of Exeter will struggle to support the increased demand without any national subsidy, as is required by the Equality Act.

“We have concerns that this will disproportionally impact on students who already face great challenges at University, and will deter many from studying altogether.”

The DSA currently helps to alleviate the extra costs incurred by students with disabilities through a non-repayable grant of up to £5,161 a year to fund  the purchase of laptops and specialist equipment, provision of support workers and assistance with additional travel costs.

But this function could now be scaled back to as the government introduce plans to only support students with specific learning difficulties, such as dyslexia, if their needs are condsidered  "complex".

While  have criticised this definition as being “unclear”, other changes include plans to no  longer pay for standard computers for disabled students, and some specialist equipment currently subsidised while the costs of specialist accommodations would only be paid in exceptional circumstances.

In a written statement to parliament on April 7, Universities Minister David Willets writes: “I am announcing a number of changes aimed at modernising the current system, subject to the Equality Impact Assessment.

“This will ensure that the limited public funding available for DSAs is targeted in the best way and to achieve value for money, whilst ensuring those most in need get the help they require.

“DSAs have been available since 1974, with the 4 separate allowances being introduced in 1990. The current arrangements do not recognise technological advances, increases in use of technology or the introduction of the Equality Act 2010.”

Despite the government arguments around increased use of technology, a survey commissioned by the NUS indicates that almost half of disabled students acquire their laptops through funding they receive, compared to only eight per cent of non-disabled students (through standard student loans and grants).

As a result the NUS believe that the changes to the DSA could prevent some people with disabilities from being able to attend university at all as they would be put off by the significant individual costs of buying the equipment necessary to achieve.

NUS Disabled Students’ officer, Hannah Paterson, said: “I have dyslexia, and the DSA paid for a voice recorder, computer and mind-mapping software for my undergraduate degree. I don't think I could have achieved the grades I did or even completed the course if I hadn't had this support.

“The government can’t say that 50 per cent of school leavers should go to university and then make this impossible to achieve. We are already seeing prospective students who are reconsidering their 2015 entry applications because they are worried that the changes will affect them.

“Hard-up universities will be unable to support disabled students if they have to pick up the tab for support that the DSA has covered until now. These cuts will undo years of work that has helped open up higher education to disabled students.”

However the government say that universities should be paying a larger portion  of costs currently covered by DSA due to legislation such as the Equality Act 2010.

“We will look to HEIs (Higher Education Institutions) to play their role in supporting students with mild difficulties, as part of their duties to provide reasonable adjustments under the Equality Act.”

Part of this rebalance means the government will no longer support non-medical assistance for disabled students such as note takers and alternative provisions for exams, saying that these costs should instead be covered by the University.

However former Education minister David Blunkett MP said that getting the universities to stump up the cash would lead to a “postcode lottery” on the necessary resources.

He said:“Equal access to a range of necessary facilities, and support to allow independent access to and successful completion of higher education courses by anyone with special educational needs, is a fundamental right.

“A postcode lottery, in which necessary additional resource depends not on need but on the institution to which the student applies, is both unacceptable, and likely to have perverse consequences in the encouragement of Higher Education providers to welcome and facilitate entry and successful completion to courses.”

“This is a step backwards, 45 years to when I personally had to organise a voluntary reading circle to complete my undergraduate degree and to rely on friends and family for the support needed. It would be entirely wrong for students with disability to become yet another victim of the austerity measures necessitated by the global banking meltdown and not by any logical policy process.”

Paddy Turner, Chair of the National Association of Disability Practitioners (NADP) said: “DSAs have proven to be a gateway to attracting disabled people into university in the first place. Over the years we have seen repeated evidence that DSAs have been a hugely successful investment in keeping disabled students in study, ensuring they succeed equally with non-disabled students and improving their employability.