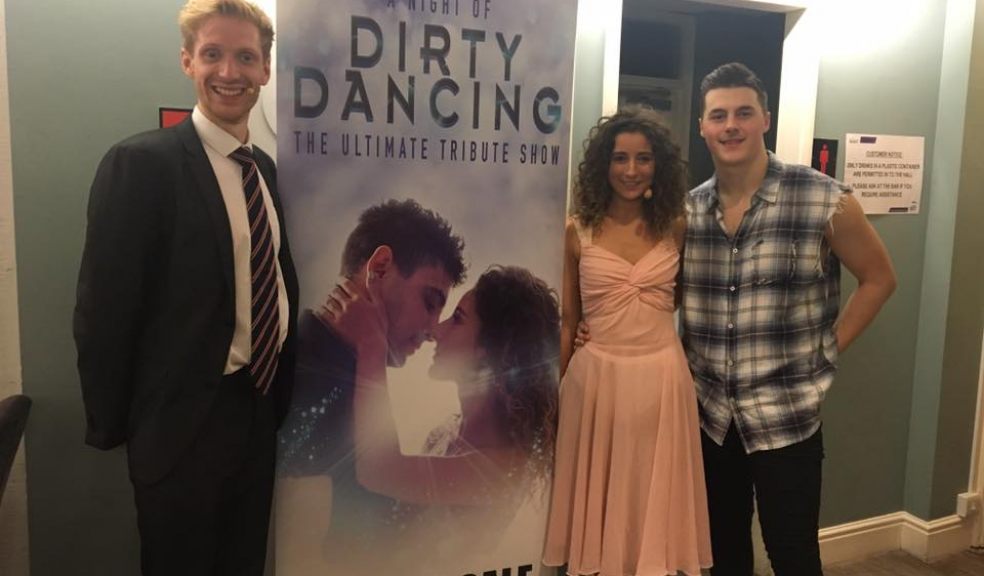 As a massive fan of the 1987 classic film Dirty Dancing, featuring Patrick Swayze and Jennifer Grey, I was thrilled to be asked to attend A Night of Dirty Dancing – The Ultimate Tribute Show, at the Exmouth Pavilion on Friday 6th October.

For those who don’t know (have you been under a rock?!) Dirty Dancing is a coming of age story about Baby (Frances Houseman) who becomes an incredible dancer and meets the man of her dreams (Johnny Castle) whilst holidaying at a family resort with her family.

Friday’s tribute performance, produced by Philip J Hawkins of Total Productions, was unique in that rather than just performing the same old scenes like you would see in a school play, it almost had a Britain’s Got Talent sense to it.

Dirty Dancing characters Max Kellerman and Lisa Houseman (played by Taylor Rettke and Elizabeth Bryant) were the ‘hosts’ of the show. Baby and Johnny had already fallen in love and the hosts were taking us back to ‘flashbacks’ from their love story.

What I particularly liked about this different approach to the story is that characters that usually don’t get so much of a backstory or an appearance in the film, such as Lisa and Max, were really given their time to shine during this performance. Taylor Rettke was really natural, warm and funny in his role as Max, whilst Elizabeth Bryant ( who I’m sure is much more reserved and quiet in real life) did an amazing job at being the loud, brash and life and soul of the party character that is Lisa.

Of course I could not go and see this production without making reference to the main characters themselves, Baby (played by Éloise-Jane Gray) and Johnny (played by Dan Ablitt).

Éloise-Jane can only be described as breath-taking in her role as Baby. Not only was she the absolute embodiment of the character physically (resulting in her not even needing to audition for the role) but her singing voice was just incredible. Rightly so, she was the star of the show.

Whilst Dan Ablitt was equally as talented as Éloise-Jane vocally, with an impressive six pack to boot as well, I felt he was not as fitted for the role of Johnny. It felt that Dan’s talents would be more appropriate for a role in Grease, and on many occasions his American accent faltered. The consensus amongst those in the audience was that Jordan Bakewell, who managed to even make the character of Robbie Gould likeable, might have been a better fit. However, it has to be said that stepping into Patrick Swayze’s shoes is an incredibly hard task, and Dan certainly gave it his all.

One character that I did think was cast particularly well was Penny Johnson (played by Georgina Rae). When the show began you could instantly recognise who she was playing and I think it’s a little bit of a shame she didn’t get even more of a chance to shine (with her dark story that features in the movie obviously cut) in this production.

In addition to performing some of the ultimate classics from the film, including Be my baby, Hungry eyes, She’s like the wind and Time of my life (complete with amazing lift!) the cast were also quick to get the audience involved, plucking poor bystander John out of the crowd and regularly making reference to him.

The singing and dancing (that lift!) were spot on during Friday’s performance, but another thing I felt was really successful in keeping with the original Dirty Dancing story were the clothes.

On many occasions it looked like Éloise-Jane had been rooting through Jennifer Grey’s wardrobe!  The iconic outfits included Baby’s baggy cardigans, her floaty tops and high wasted skinnies, and the gorgeous pink number that features in THAT final dance. Men of the audience were also glad to see the girl on girl dancing in the pants scene was not cut from this production!

A hats off should also be given to the amazing dancers that performed without seemingly even breaking a sweat – Jemma Hutcheson, Megan Little, Lara Jane and Georgia Krellè, who were also one man down in the form of Shane Seal.

What I think I enjoyed most about the show, directed by Will Norton, was when the crowd walked in you could see many had the weight of the world on their shoulders, relationship worries, money trouble, fall outs with friends. But by the end of the show the feel good vibes that embody the film were filling the Exmouth Pavilion. Mothers and daughters were having a little dance together, groups of women on a ladies night were belting out the tunes. It was enough to bring a tear to my eye and a really great start to my weekend.

If you fancy having the time of YOUR life (sorry!) then visit http://entertainers.co.uk/show/a-night-of-dirty-dancing/