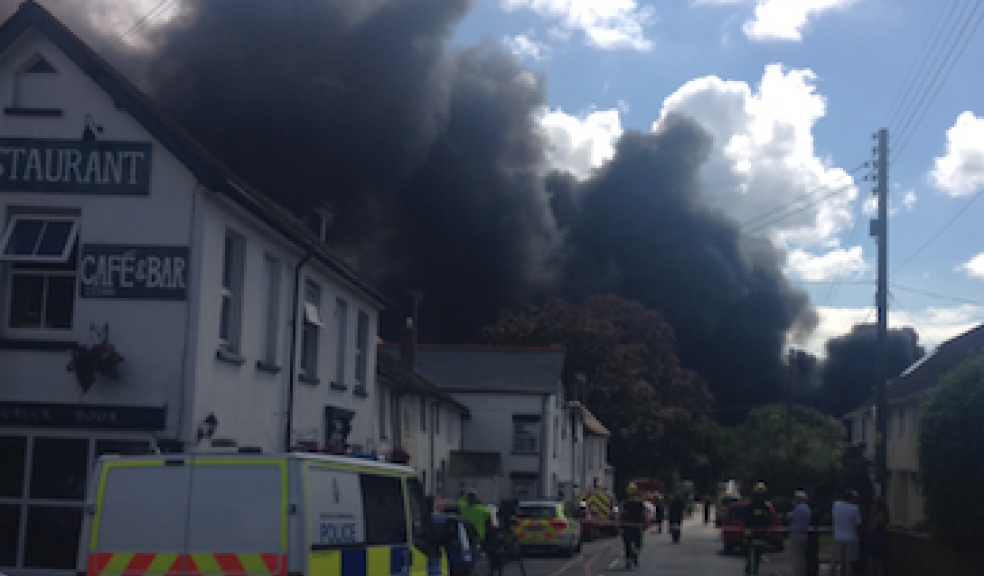 Dozens of firefighers have been tackling a blaze at a breakers' yard at Gilbrook Road, Woodbury, near Exeter.

Crews were still on the scene this morning making the area safe.

Residents were evacuated yesterday afternoon and at one point 10 appliances were in attendance.

Meanwhile, the Devon and Cornwall Police helicopter surveyed the scene, as a large crowd gathered on the ground.

14:16 - 1 fire appliance from Sidmouth and 2 appliances from Exmouth were mobilised to numerous reports of a fire in a brakers yard at the above location.  Exmouth appliances were first on scene and reported one building well alight with a massive plume of smoke affecting the area.  A large gas cylinder was also reported to be involved in fire.

14:49 - An additional appliance from Budleigh Salterton was requested from the incident ground as the commercial brakers yard was reported to be fully involved in fire.  The Incident Command Unit from Honiton was also mobilised.  The Environment Unit from Newton Abbot was also requested.

15:06 - The incident ground requested a further 6 appliances which were mobilised from Sidmouth, Crediton, Middlemoor, Exeter and Honiton  - making a total of 10.  The commercial car brakers yard was fully involved in fire.  A representative from the Environment Agency was also in attendance.

20:25 - Incident being reduced to 3 fire appliances.  Steady progress being made.

The cause of the fire is still under investigation by the Fire Service and Police.