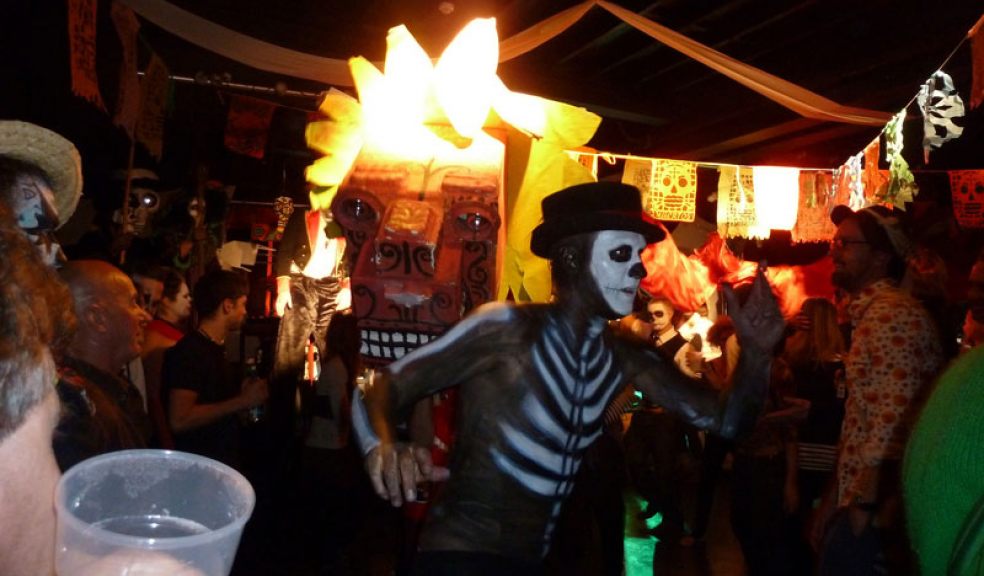 I have always had a fascination with Mexican culture, not least Dia de los Muertos, the Mexican Day of the Dead fiesta.

This festival and the Mexicans’ attitude to death, offers a very different perspective to our culture, which has become a very grey, ‘under the carpet’ affair, as opposed to the Mexican day of the Dead which is a colourful celebration of life and death, a remembrance of those lost.

I felt that it was something we truly lacked in our culture – death seems to be something we have difﬁculty addressing and coming to terms with – what this festival does is it embraces death or even laughs at it and invites the dead back home among the living.

As a brief run-down, I run a club/arts night called The Rambunctious Social Club. Our night is very much an interactive experience, involving the public in themed arts-based activities on each night, while the music plays. Regular examples of such play include, live toy and animated turntables - projected live and painted cut-outs that people can pick up and put over their heads...

The last two years we have been lucky to take our Mexican Ball to The Yellow Rooms in Sealhayne, which have given us the chance to develop the ball on a bigger scale, incorporating lavish set design, more interactive art in a bigger space and a larger musical set-up. The feedback from these nights has been very interesting, as well as people having a great time, they have also thanked us because it’s also been a cathartic experience for them and in some way they have felt it’s been a positive vehicle to celebrate those they have lost and our ancestors.

So this year for 2013 I decided that the best place to bring these ideas together was Exeter, in the form of a five-day fiesta! I believe that Exeter is the best place for these ideas to develop and for the festival to grow outwards into the city each year it takes place. I believe this all has a lot of potential and as well as the Mexican ball itself, which takes place on one night, this year we want to involve the public a lot more (particularly children) and make it into a bigger event involving family workshops, ﬁlm and performance. Reaching to a wider audience, who can in turn learn about what this amazing festival is about and enjoy some interaction and crafts at the same time.

So here we are.

From 28 October to 1 November we have the Rambunctious Social Club's Mexican Day of the Dead fiesta, in partnership with the Exeter Phoenix. We will be running half-term workshops for kids - making Nichos (colourful shrines), skull masks, clown workshops with Le Navet Bete, film and an open mike performance night.

All of this will finish with the wildly exuberant Mexican night of the Dead Ball on 1 November.  With live music, interactive art and Djs, this promises to be a night to remember!

I'm really excited to bring an event like this to Exeter, which as far as I know is a first. I'll also be airing on Phonic fm on Saturday 19 October at 2pm with a Mexican Day of the Dead special - with insights into the festival origins, Mexican music - old and contemporary, special guests and an invitation to the dead!

So celebrate in style, forget Halloween this year, let's do it Mexican Stylee...AAARRRIIBBBAAA!