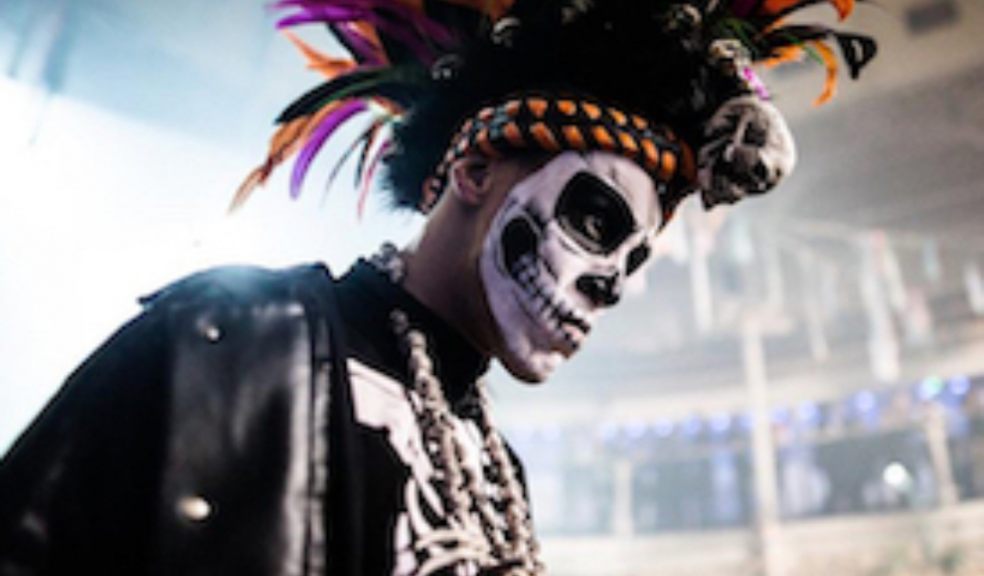 Festival Of The Dead, the hugely popular 'deathly fiesta' lands at The Great Hall, University of Exeter on Friday 25th October for its 4th year touring, with brand new, mind-blowing production infusing carnival, circus, theatre and clubbing. New for 2019, Festival of the Dead presents 'The Dark Carnival' featuring a whole new cast of characters and otherworldly creations, acrobats, circus performers, magnificent carnival processions through the crowd, and much more, all set to a high octane soundtrack.

Only Festival Of The Dead can dazzle the crowds with the UK's largest touring skeleton prop; the huge mechanical skull known as 'El Diablo', as well as the UK's only giant spider on stilts, creating a breathtaking visual spectacle brand new for 'The Dark Carnival'. With mind bending performances, live music and DJs spinning killer tunes, professional face painters and crowds dressed up in macabre outfits to be part of the show, Festival Of The Dead is an experience like nothing else out there. The unmissable 2019 tour begins on 28th September and visits Coventry, Newcastle, London, Exeter, Amsterdam, Leicester, Birmingham, Manchester, Lincoln, Glasgow, Leeds, Norwich and Bristol. Tickets start at just £19 for The Dark Carnival (VIP £39) + booking fee from www.festivalofthedead.co.uk. Watch promo video HERE.

Festival Of The Dead grew from a single Halloween party at The Troxy in London to an experiential phenomenon. It has sold over 85,000 tickets in sold out shows across the UK and Europe, with guests coming back time and again to enjoy a truly unique immersive experience, and of course, a great party, with music, dancing and entertainment all night long. As Festival Of The Dead returns with 'The Dark Carnival' guests will be amazed throughout a night of eye-popping props and creations, live acts with awe-inspiring shows and breath-taking performances, explosive carnival scenes and Halloween-inspired hedonism. The action is set to a spectacular soundtrack of music across the spectrum, including rock, drum & bass, indie, house, and carnival flavours. Festival Of The Dead truly is entertainment on a different scale.

"We've been working flat out since last year to create an even bigger and better show. There really is nothing else out there like Festival Of The Dead. The quality of the production is next level and our hugely talented performers have raised the bar once again. Every year we push the boundaries of a live show and we can't wait to see the crowd reactions when they meet the new creatures we've built to join them at 'The Dark Carnival'. Our guests are also part of the show and seem to up their game each year too, with some incredible make up and costumes. This tour is going to be the best one so far and we look forward to giving our guests an unforgettable experience."

Festival Of The Dead 2019 tour will land in twelve cities around the UK as well as in Amsterdam. As always, these shows will sell out fast as fans of the deathly fiesta prepare to step into the underworld for the night of their lives. To experience this incredible show visit www.festivalofthedead.co.uk.