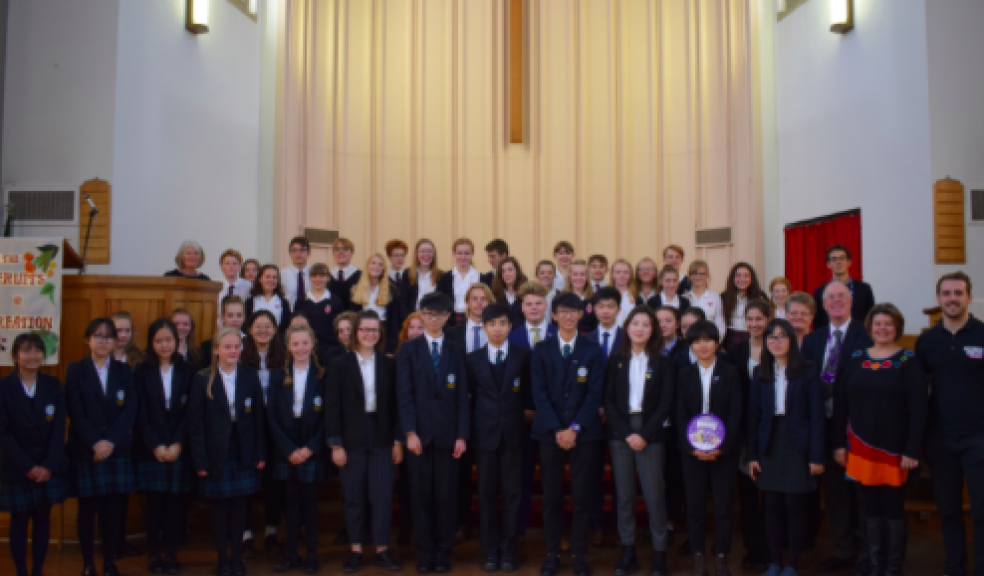 On 5th October, the finalists from the Devon Schools Choir Competition, run by La La Choirs, took centre stage at Southernhay URC and competed for a chance to perform in Exeter Cathedral at the annual sell out concert, CLIC for Christmas. Five choirs had been shortlisted and all the choirs at the final sang two songs each. Yet again, the standard was incredibly high, giving the judging panel a really hard time deciding between them.

Congratulations go to Kingsley School from Bideford, led by Chris Beechey, Head of Music, who just edged it on the day and were named the winners. The runners up who came a very close second were St Peter’s CofE Aided School from Exeter. The trophy was presented by Steve Screech, General Manager of Apple Taxis Exeter, who are headline sponsors of the event.

Sam Abrahams from La La Choirs, who are hosting the concert and ran the competition, said: “This is the third year of running the Schools Choir Competition and each year I am amazed by the very high standard of the entries. It is fantastic to see school choirs are still thriving and long may it continue! I am really excited to see what our winners, Kingsley School, come up with for our concert in the Cathedral - I know that they put a lot of work in to reaching the final and I’m sure they will be rehearsing hard now for the performance itself. The Cathedral is such an amazing venue and the charity is very special to us so I’m sure it will be an experience to remember for them for years to come.”

Kingsley School will now perform in Exeter’s historic Cathedral on Friday 8th December 2017 as part of the CLIC for Christmas concert to raise funds for CLIC Sargent. Tickets for the concert are on sale now through the La La Choirs website at www.lalachoirs.co.uk and are £12 for adults or £6 for under 16s. The concert has been completely sold out for the last two years and tickets are already going fast, so don’t miss your opportunity to get yours now!

Alongside La La Choirs and Kingsley School, will also be a group of performers known as the CLIC Sargent Singers.

This group of talented young musicians and singers met at CLIC Sargent’s summer music workshop. The charity's Music Programme for 16-24yr olds is part-funded by Youth Music and supports budding young singers and musicians with, or recovering from cancer. Projects designed to raise confidence and self-esteem include concert and festival trips; workshops; 1:1 tuition; studio recording and performance experiences.

About La La Choirs
La La is a family of community choirs that are open to anyone and everyone (18+). Our music ranges from pop to rock, soul to choral. La La Choirs began in Lympstone in September 2008 and is run by Sam Abrahams. It is a very popular and there are now four choirs with over 250 members on the books, who meet every week. The ethos of the choir is simple: if you like singing and enjoy having a laugh then this choir is for you. Whether it’s weekly, monthly or just when you can, you are always welcome.

Sam also ran the Lympstone Military Wives Choir who featured on the first and second Military Wives Albums and performed with Russell Watson, Katherine Jenkins, and in front of the Queen, selecting girls to perform at the Jubilee concert in London and record the ‘Sing’ EP. Sam began working with the Milwives when she directed a surprise song for Gareth Malone on the final episode of the three part series.

Last year CLIC Sargent’s care teams gave vital support to around 142 young cancer patients, and their families from Devon. Across the whole of the UK, CLIC Sargent supported around 7,200 children, young people and their families. We help them deal with the devastating emotional, practical and financial impact of cancer. And we help empower them to feel like people rather than patients, supporting families to hand on to a sense of normality when their world has been ripped apart.

We are currently only able to help two out of three children and young people with cancer across the UK with our vital support. Our aim is to be there for every child and young person when they need us most.