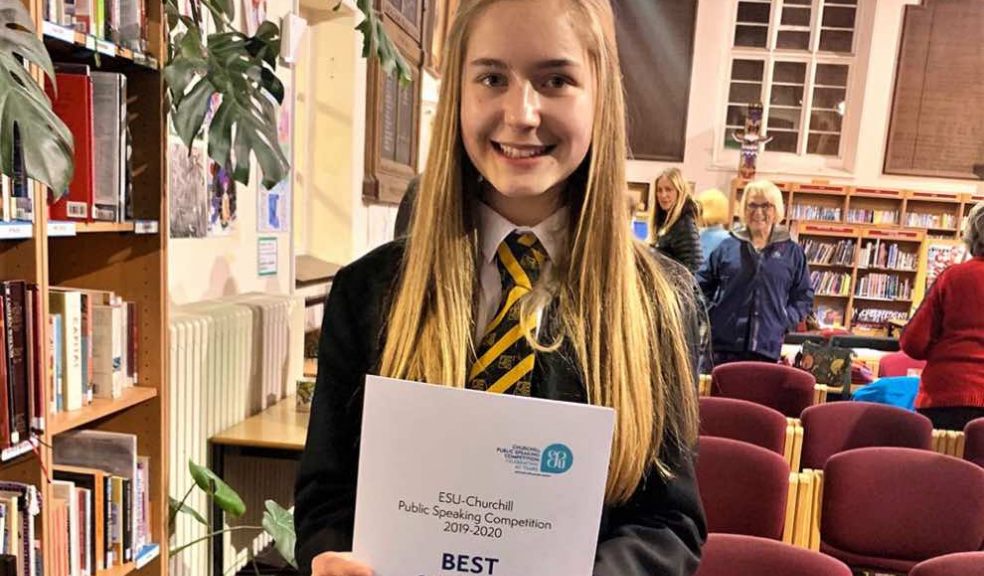 This competition is run by the English Speaking Union and QE played host for the second heat for the Exeter area, the first heat having taken place last week at Blundell’s School. The English Speaking Union (ESU) is a charity working to give young people the speaking and listening skills and the cross-understanding they need to thrive. You can find out more about them here www.esu.org.

QE entered two teams who competed, very successfully, against a team from Uffculme Academy and a team from Isca School.

Team 1, comprising Nell Hodgson, Kiki Shaw and Florence Terry selected the topic “Public Schools Should Be Abolished” and Team 2, comprising Mia Hodge, Will Harrison and Maya Vaughan, chose the topic “CCTV is a Threat to our Freedom” to speak about.

Judges Roger Tilbury, Sue Maunder and Stephen Lawson were full of praise for the skills shown by our students and awarded Mia Hodge with Best Speaker and selected Mia’s team as one of two winning teams.

Mia, along with her teammates Will Harrison and Maya Vaughan, will now compete against Uffculme and two teams from Torquay Girls Grammar, in the regional final held at Exeter Golf and Country Club in December.

QE’s Vicky Evans, Head of Drama and English teacher Caroline Wilson commented; “This was the first time QE has participated in, and hosted, this event and the evening was a great success. We are extremely proud of the commitment and energy invested in their topics by our two teams, who were articulate, intelligent and passionate in their speaking. Congratulations to Mia for her Best Speaker Award and her team for progressing in the competition, we are very excited to be participating in the next round!”