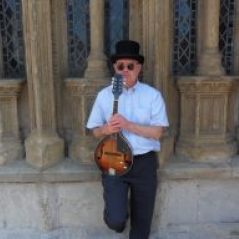 The Legendary Ten Seconds started off as the solo music project of Ian Churchward during the time when he was the lead guitar player of The Morrisons who were featured on John Peel's radio one show back in 1987. In 2013 Lord Zarquon joined Ian's music project and since then various guest musicians and vocalists have helped out in the recording studio. The most recent musicians to join the project are Phil Swann and Martyn Hillstead.

Ian has recorded many critically acclaimed English folk rock albums which chronicle the Wars of the Roses and the life and times of Richard III in England during the late 15th century. The albums are available on Amazon and itunes and the band have donated money to a scoliosis charity from some of the income generated from the sale of their music. The CD versions of the albums are available via the Richard III Society in the UK.

In 2018 Ian recorded the Mer de Mort album which was commissioned by the Mortimer History Society to commemorate the Society's tenth anniversary. It is a historically accurate album of songs which tells the story of the significantly important Mortimer medieval family from their roots in Normandy prior to the battle of Hastings and into the 15th century. The album includes historical narratives read by the actor John Challis ( Boycie in Only Fools and Horses ) who was the patron of the Mortimer History Society.

2019 saw the release of four albums, Devon Roses, History Book Part One. Instrumental Legends and Thrilling Blunder Stories. In February 2020 the History Book Part Two album was completed and this was followed by The Acoustic Almanac, Amazing Songs and the Pageant of Torbay Part One albums. Additionally a new version of the first Richard III album was released in digital format via Circle of Spears Productions. The new version of the album features fictional narratives written by Sandra Heath Wilson. Following the release of the Pageant of Torbay Part Two and the Semi Acoustic Almanac albums in 2021, the latest album contains songs all about Devon. This album is in the format of a Torquay radio show with jingles recorded by the band and introductions by Riviera FM's Peter Cartwright.

The sounds of the Mellotron feature quite significantly in the recordings of the Legendary Ten Seconds and help to give the songs a very unique and interesting sound.

Ian has performed several concerts for the Richard III Society including one for the USA branch in Denver. Ian Churchward has also published a book about the music of The Legendary Ten Seconds which is called Songs About Richard III and is available from Amazon.