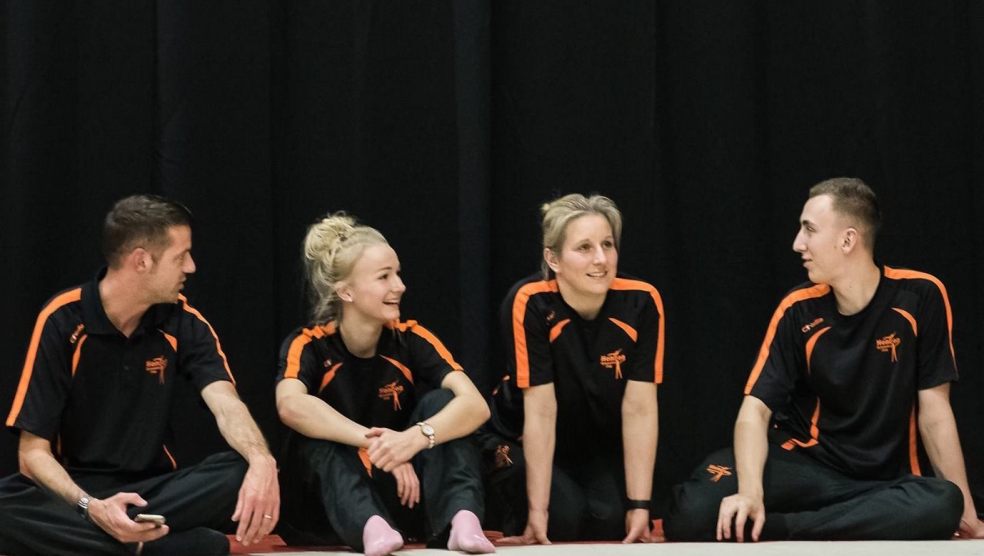 Honiton Gymnastics Club high-performance coach Helen Reddy has been shortlisted for the Coach of the Year Award in the Devon Sports Awards 2017.

The Level 5 gymnastics coach, who has been involved in the sport for more than 30 years, will now attend a glittering awards ceremony at Sandy Park in June.

Helen has been recognised by awards’ judges thanks to her tireless work at both Honiton Gymnastics club (where she is a coach and board member) and at Ivybridge Community College (where she is Head of Performing Arts and runs the gymnastics academy).

After a sporting career as a national-level gymnast, Helen took over the reins at Honiton Gymnastics Club in 2001, along with Emma Smith and Pam Burns – after her coaches left the area.  Since then the club has grown tremendously in size and success, with Helen at the heart of club and coach development.

Honiton Gymnastics Club has increased participation from less than 50 gymnasts in 2007 to now almost 400 young people, with the team of 30+ coaches being guided by Helen. In addition to leading the coaching team, Helen also masterminds the club’s events, including organising the UK’s biggest annual acrobatic gymnastics development competition.  She also coaches the club’s Squad Acrobatics group, with recent successes including coaching and choreographing routines for the Jenior British Women’s Group champions and Junior (13-19) Men's 4 Champions.

Away from Honiton, as Head of Performing Arts at Ivybridge Community College Helen runs the most successful school gymnastics team in the UK. Training at lunch times and after-school, her team won more national titles than any other school at last year’s BSGA floor and vault and acrobatic gymnastics championships. She oversees the development of 300+ students at primary and secondary level, mentors a team of young coaches and helpers, and also directs the college’s Performing Arts Show, which includes performances by more than 500 children.

Liz Slater, Leisure Partnership Manager at Plymouth City Council, who nominated Helen for the award, said: “I can think of no better candidate, in my 25 years of sports administration, who deserves this accolade more.  Her work touches on the lives of a tremendous number of young people through Devon. 300 words cannot do this individual justice – we could have written 3,000!”

Honiton Gymnastics Club Coach and Board member, who has known Helen for more than 20 years, said: “Helen carries out every coaching role imaginable – from working with our youngest gymnasts to training international performers. And when she’s not in the gym, she’s planning how we can develop our provision for gymnastics further, looking at ways to improve our level of coaching, and seeing how we can give more children the opportunity to participate. It takes tremendous dedication to be involved in any sports club at such a high level – and Helen manages to do it successfully at two.”

The overall winners of the Devon Sports Awards 2017 will be announced at the event at Sandy park on Friday 30 June, which is hosted by Olympic gold-medal-winning James Cracknell.