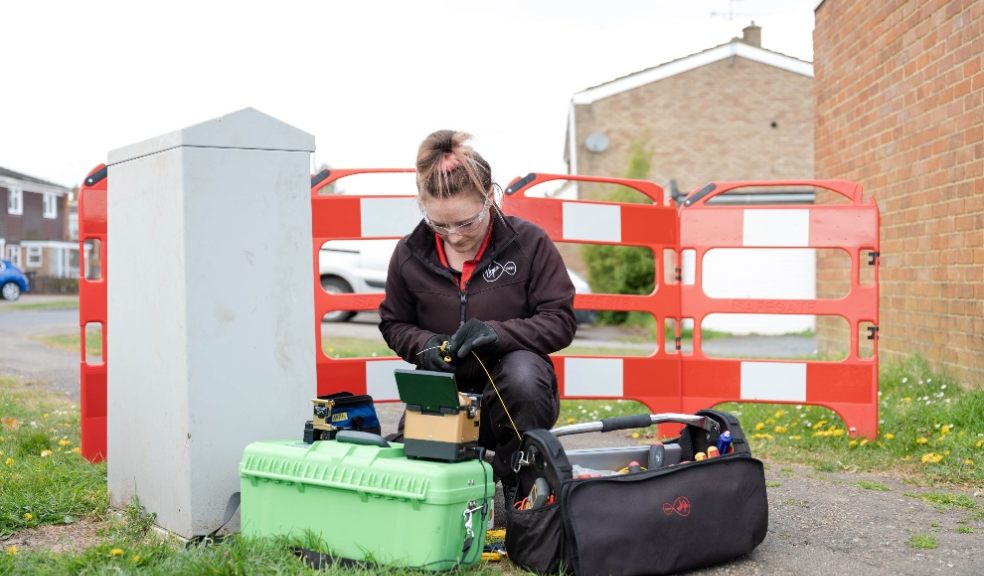 Virgin Media O2 has today added thousands of homes in Exeter to its gigabit network, connecting areas in and round the city to broadband speeds 16 times faster than the local average.

Virgin Media’s next-generation Gig1 broadband service, with average download speeds of 1,130Mbps, is the fastest available from any of the major broadband providers. It is the UK’s largest gigabit provider – more than twice the size of its nearest competitor.

As well as preparing homes for future technologies and applications including metaverse style augmented and virtual reality experiences, gigabit speeds enable households to do more online – from working, streaming, socialising and gaming – all at the same time on multiple devices under the same roof.

As part of today’s gigabit switch-on, Virgin Media O2 has upgraded thousands of homes in Topsham and Cranbrook to gigabit speeds, completing the upgrade of its entire national network.

Today’s switch-on means Virgin Media O2 is the only major internet provider to have completed a gigabit upgrade programme at this scale, rolling out next-generation services to every home on its network in a little over two years without the need for lengthy construction work.

Lutz Schüler, Chief Executive Officer at Virgin Media O2, said: “Just two years ago we set out to spearhead the UK’s gigabit revolution and today we’ve delivered. Our investment to bring gigabit broadband to every home on our network, including in Exeter, has catapulted the UK’s digital infrastructure forward by a decade and forced others to up their game.

“As the country’s largest gigabit provider by far, we’re the driving force behind widespread gigabit availability four years ahead of the Government’s target.

“Having reached this major milestone by bringing Gig1 to Exeter, we’re doubling down on our mission to upgrade the UK by continuing to innovate and invest in our network to support the technologies of tomorrow – there’s no slowing down at Virgin Media O2.”

As part of its mission to upgrade the UK, the company has committed to invest at least £10bn over the next 5 years in the UK.

Virgin Media O2 is already one of the largest network builders in the country and continues to expand its footprint through Project Lightning which has seen more than 2.6 million additional premises built to so far since works began - all which can now access gigabit services. To go further and faster, the business is actively exploring options to deploy fibre to millions of additional homes across the country.

The company has also successfully completed a number of real-world trials to deliver speeds of 2.2Gbps to homes using its existing network and technology.

Earlier this year Virgin Media O2 announced its intention to upgrade its fixed network to full fibre to the premises (FTTP) with completion in 2028. This technology is capable of delivering symmetrical 10Gbps download and upload speeds, meaning Virgin Media O2 will build on its existing leadership position today and be well equipped for the decades ahead as the demand for speed and capacity continues to rise.

The Hub 4 boasts more antennae than its predecessor, the Hub 3, meaning it can manage multiple devices at the same time around the home which can all share the hyperfast speeds.

Gig1 customers can also take their connectivity to the next level with Intelligent WiFi pods which are available at no extra cost. The pods can help tackle WiFi blackspots around the home, providing faster and more reliable speeds in hard-to-reach spots.

Gig1 broadband is available to new and existing customers and can be packaged with or without telephone, TV and mobile services. Prices start from just £62 per month on an 18 month contract with a guaranteed price freeze for at least 24 months.

Customers can find out more and buy Gig1 at https://www.virginmedia.com/broadband/gigabit