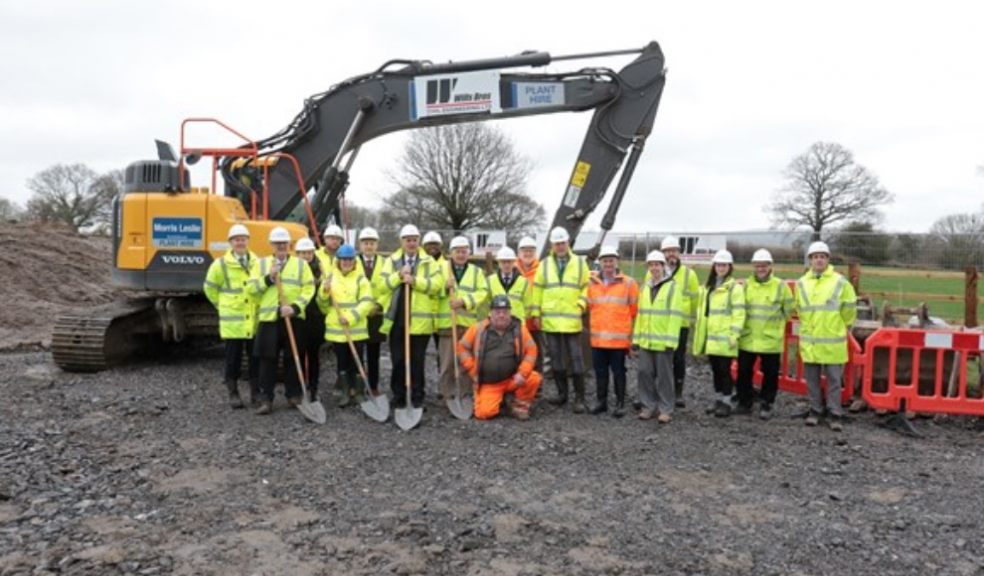 A turf cutting has been held to mark the start of the first phase of the £13 million Devon County Council scheme upgrading the A382 at Newton Abbot.

Work is currently underway on earthwork, vegetation clearance and utility service diversion as part of the improvements to the link from Newton Abbot to the A38 at Drumbridges roundabout.

The project involves realigning and widening the route between Forches Cross and Whitehill Cross, and a new roundabout will be developed at Ringslade Road.

The upgraded road will improve safety and provide additional capacity to relieve pressure on existing roads, as well as unlocking economic growth with developments to the west of Newton Abbot by providing the main access to a proposed employment site and around 2,300 homes planned for the area. A new pedestrian and cycle path will also encourage sustainable travel to and from the town.

Simon Clarke MP, Minister of State, Ministry of Housing, Communities and Local Government, said: “We are committed to levelling up across the whole of the UK and ensuring every community has the support and investment it needs to grow and flourish. This road is so important to people across Devon and our £6.5 million Local Growth Fund investment to widen it will make their journeys better and faster as well as unlocking new jobs and homes in the area.”

Councillor Andrea Davis, Devon County Council’s Cabinet Member for Infrastructure and Development, said: “This is a vital investment in Newton Abbot’s economy – it will ease congestion and unlock the development of new homes and jobs. The team has made a good start to this scheme and no doubt everyone will be keen to benefit from the reduced journey times and improved safety that this upgrade will provide. These improvements will also offer safe, high quality cycling and pedestrian routes which will make walking and cycling a realistic alternative to the car for short journeys.”

Karl Tucker, Chair of the Heart of the South West LEP, said: “Widening the A382 will improve safety and journey times to Newton Abbot and enable people at the new housing development to cycle and walk the route as well as drive. We’ve invested £6.5m of our Growth Deal funding into the scheme, which is anticipated to generate 1000 jobs and 1200 new homes by 2021.”

Councillor Gordon Hook, Leader of Teignbridge District Council and Devon County Councillor for Newton Abbot South, said: “Obviously there will be a period of disruption for drivers to endure, but ultimately we have to believe that there will be significant gain for all the pain endured. I am particularly pleased to note the commitment to sustainable transport, with first class cycling provision in the proposals. In what must become a united fight against climate change, a fundamental change in attitude towards public transport must happen soon. Government needs to invest heavily in cheap or free public transport to save the planet, and we don’t have a moment to lose.”

In order to minimise disruption from construction work, one lane in each direction will be kept open where possible.

However, there will be times when it will be necessary to reduce the traffic flow to a single lane using traffic lights, but this will be undertaken outside of peak hours or overnight. Advance notice of traffic control measures will be signposted on site.

Access to nearby homes and businesses will be maintained at all times, and construction traffic will not be allowed to use West Golds Way.