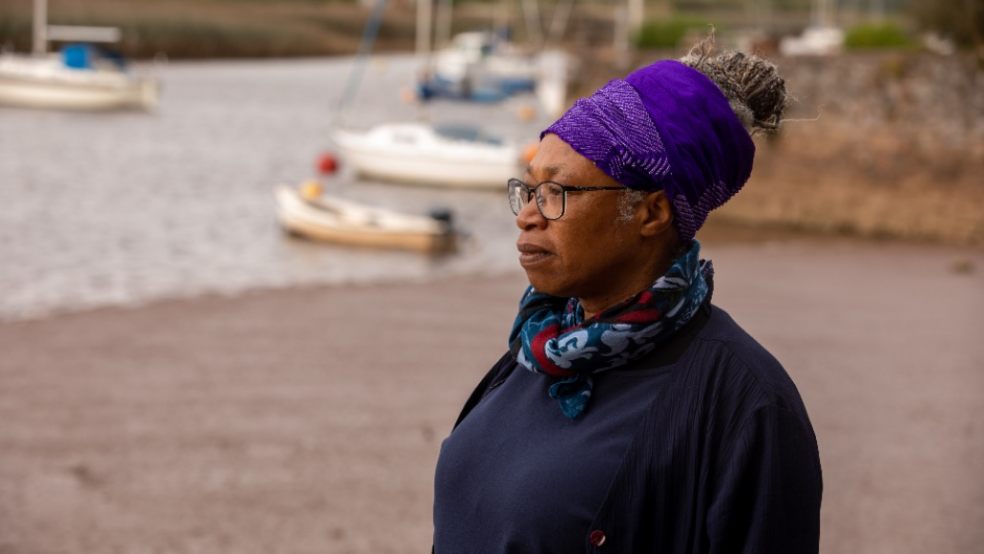 Artist Joy Gregory has been commissioned by the museum to respond to their collection and a new exhibition, In Plain Sight: Transatlantic Slavery and Devon. New textile and film works layer stories of sugar refinement and the hidden wealth created by slavery across the Atlantic with the present.

Joy Gregory is an acclaimed contemporary British artist. Her work is concerned with difficult social and political issues, with particular reference to history, race, gender, and cultural differences in contemporary society.

In Plain Sight: Transatlantic Slavery and Devon explores Exeter and Devon’s connection to the Transatlantic slave trade and the legacies of this within the region. Using RAMM’s collections, the exhibition will highlight local objects, people and organisations that have documented links to the slave trade, aiming to shed light on evidence that has remained ‘hidden in plain sight’.

Originally commissioned in 2019, Joy Gregory’s approach and work changed due to the pandemic. Preferring to make work that is ‘fresh and relevant to the moment’, Gregory has taken time to explore RAMM’s collections, collaborate with the curatorial team and historians, and explore the land owned by the families of Devon who derived their wealth from sugar and slavery.

Gregory’s approach to the context of slavery and wealth has also been affected by the Black Lives Matter (BLM) movement with the work developing so that it knits together the past with the present while looking towards ‘a brighter’ future. Gregory wants to produce something ‘seductive and beautiful' that draws people in with a series of stories that reflect on contemporary lived experiences and the relevance and relationship between past and present.

Gregory’s research started with sugar. Arriving from the Caribbean, the unrefined sugar was transported down the River Exe. Sugar could be made without paying duties, so sugar refining in Devon was financially lucrative. Topsham refinery in Devon is especially important as it is possible to trace its rise and fall through its different owners.

These new works bring together stories from multiple perspectives: from across the Atlantic focussing on sugar production, the impact on ordinary people's lives and the legacy of violence against enslaved people contrasted with the refinement of the wealthy who benefitted from that trade.

Joy Gregory, the artist said: “The consequences of this time are that black people and people of African descent are made absent or presented in a negative light. And how black people are treated now, stems from this history, a dark history. I am telling the story of unrefined sugar and refined sugar, and the stories that people don't know yet and presenting them in a way that people can take responsibility and understand the relationship between themselves and history. I’m interested in how ‘institutions’ like the grand white house in Topsham [The Retreat] are the epitome and symbol of refinement and civilisation. The daintiness, pretty dresses and sitting down to tea, and how they would take the sugar off the cone to put it in the tea was in real contrast with the lives of the enslaved or the workers. It’s my job as an artist to create curiosity and bring histories together to dig deeper, not just about the wealth, but also about the industry behind that wealth. I am making things of beauty to talk about ugliness, so people can relate to this story, instead of thinking that it doesn't relate to them and walking away.”

Fascinated by the Combesatchfield House embroidered textile from the 1750s and 1760s, and particularly a dark-faced figure holding a parasol, Gregory has chosen to work with textiles and embroidery for the first time. Representing human touch across centuries, she is also developing a specially developed new cyanotype colour for this work.

For her film, contemporary voices will overlay landscape images depicting the land of local estate owners. The film is like a ‘legend or narrative legend’ that also relates to the Combesatchfield House textile, looking at connecting the past, the present and the future.

Shelley Tobin, assistant curator of textiles said: “This exhibition gives us the opportunity to bring objects together that were collected many years ago and preserved in families: to re-examine them in the context of historical, social and cultural change, and to reinterpret them for a new audience. I’ve enjoyed seeing Joy’s cyanotypes made using hair combined with a beautiful blue which is reminiscent of traditional indigo, itself a traded commodity. It has been inspiring sharing the Combesatchfield embroideries with Joy and seeing her response to them. In some ways, they are a bit of a mystery as we do not know exactly who made them, how many hands were involved, the ages of the makers, or exactly how they were used. It’s been especially interesting to witness Joy’s process of developing the themes of her work, and to see how she has taken the idea of expressing a narrative through these embroidered scenes and applied it to her own interpretation of the transatlantic trade in sugar and people.”

Lara Goodband, contemporary art curator and programmer said: “Joy was invited to apply for this commission and selected by a panel. Her proposal stood out to us as it actively engaged with local people in the research and making of her new work. Joy brings to the museum a fresh insight and questioning approach to new research and her enthusiasm and creativity has encouraged the team to pursue new lines of enquiry. It’s always exciting to be with Joy when she is in the museum or making site visits when new ideas start to take the form of artworks. I know Joy’s new work will be both inspiring and challenging seen alongside objects from the RAMM collection.”

In Plain Sight: Transatlantic Slavery and Devon opens to the public on Saturday 29 January 2022 at the Royal Albert Memorial Museum & Art Gallery (RAMM) in Exeter.