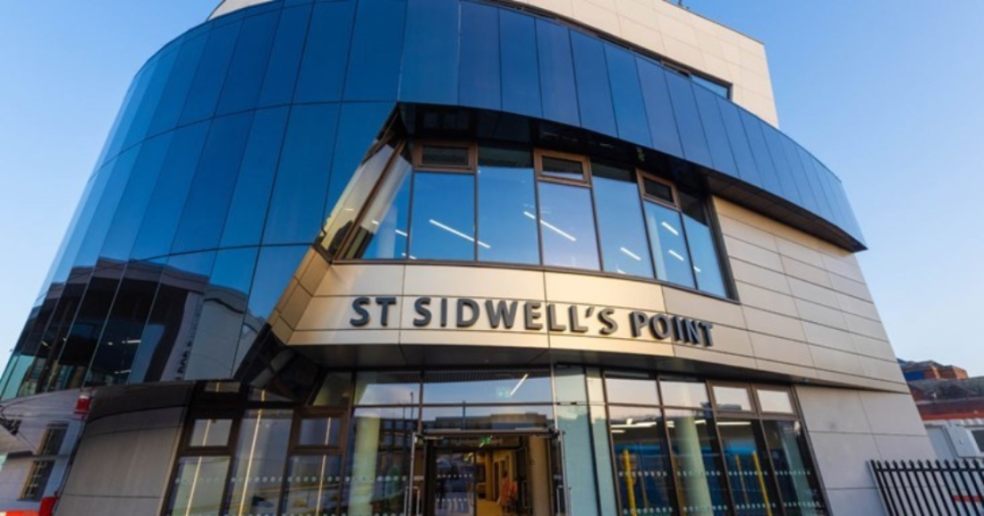 Exeter’s landmark new leisure centre finally has a date to open to the public.

The finishing touches are being completed at St Sidwell’s Point, built on the site of the city’s former bus station at a cost of £44 million.

The country’s first leisure centre built to the super energy-efficient Passivhaus standard will open on Friday 29 April at 10 a.m. the city council has revealed – after a lengthy period of delays.

It was due to be completed last summer, but has been affected by covid-related delays as construction workers have self-isolated, and backlogs for obtaining some building materials.

The centre features an eight-lane, 25-metre main pool and four-lane, 20-metre learner pool, both with moveable floors, as well as a gym with 100 stations (such as treadmills, rowing machines etc), fitness studios and luxury spa facilities.

Hundreds of people have been given the opportunity to preview it over three nights this week.

Council leader Phil Bialyk (Labour, Exwick), who was “absolutely amazed” during a press tour earlier this year, said it had been a vision of the administration for the last decade and was part of a wider strategy for leisure in the city.

Speaking in January, he said: “We’ve invested heavily in it as a facility for people in Exeter. We’ve brought the leisure facilities back in house – that’s 400 staff back employed by the city council delivering our leisure facilities.”

He defended the investment in the building, built by Kier and funded by the city council, despite leisure services being classed as ‘discretionary’ and thus which don’t need to be provided by local authorities.

“My main concern is the people of Exeter – my family, everybody else’s family who wants to use our facilities. This is a real big investment we’re making in the city and I think it’s going to have a good return for us all.”

Addressing concerns some people have about the cost of St Sidwell’s Point, Cllr Bialyk added: “I understand those concerns. I often worry about it as well, but not worry about it in so far as it’s too much.

“We’ve got a business plan in place. I believe this is important to turn a profit at some stage [but] in the first year or two we’ve got to build the membership up.”

Exeter’s leisure membership fees start from £25 a month, which allow people to use the council’s other leisure centres as well as St Sidwell’s Point. A pay-as-you-go option will also be offered.

As well as the pools and gym, ‘premium spa facilities’ include a hydro-bath, foot spa and hot beds, plus a salt vapour room, private bar and relaxation area, private roof terrace and a state-of-the-art sauna.

The gym will have around 100 stations (such as treadmills, rowing machines etc), a designated free weights area plus group exercise zones – including an indoor cycling studio and two fitness studios.

Portfolio holder for leisure Councillor Duncan Wood (Labour, Pinhoe) said in January: “Both the running costs and the build of this centre are not linked to the [council tax] rates people pay. The leisure service itself has to pay for itself.”

“St Sidwell’s Point is an absolutely jaw-dropping building. It is amazing. It’s not too much to say it’s the best you can get,” he said.

After the opening date was announced, Cllr Wood added in a statement: “During our preview nights this week the reaction has been just brilliant. People are amazed to see the quality and can’t wait for it to open. The good news is that it is now only a few weeks away, and I couldn’t be more pleased.”

The centre will replace the nearby Pyramids, which earlier this month suffered  storm damage and closed after 80 years’ service.