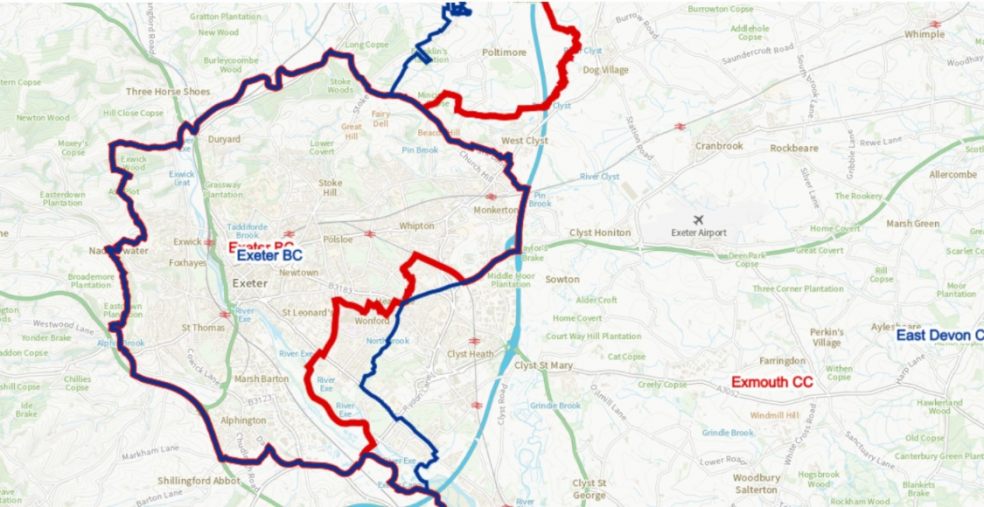 MPs from Exeter and East Devon have been left surprised by proposals that would see a major shake-up of their electoral wards.

Burnthouse Lane, parts of Countess Wear, and the Royal Devon and Exeter Hospital are set to be moved ‘out of Exeter’ under proposals for a shake-up of England’s electoral map in 2023.

While Devon will gain an extra MP as part of the proposals, albeit in a county boundary between Somerset and Devon in the new Tiverton and Minehead constituency, as a result of the boundary changes, parts of what is the existing Exeter constituency will be moved into a new Exmouth seat – which primarily covers the existing East Devon seat, with areas around Sidmouth and Ottery St Mary moving into a new Honiton seat covering the east of the county.

The proposals would see the boundary between Simon Jupp’s East Devon seat and Ben Bradshaw’s Exeter seat, which currently runs along part of Rifford Road and Topsham Road, would be moved closer to the city centre and out towards the southern boundary.

Countess Wear, the area around Isca College, the rest of Wonford and St Loye’s, as well as the area around Burnthouse Lane, would all be moved into the Exmouth constituency.

Exeter MP Ben Bradshaw said that the proposal was a surprise but given the size of the city, it would be a challenge to find any outcome that suits everyone.

He said: “The people of Burnthouse Lane and Thornpark Rise will be surprised about the proposal that they should be moved out of Exeter to the new Exmouth constituency. The problem is, this is the logical continuation of the last boundary changes that moved the Topsham and St Loyes wards out of Exeter, combined with the Tory Government’s last botched local council ward boundary changes which left an absolute mess.

“The challenge, given Exeter needs to lose a chunk of voters because we are now too big under the rules for a single seat covering the whole city, will be to find an alternative that doesn’t involve moving a different area of the city that feels just as much part of Exeter into a neighbouring constituency.”

Simon Jupp, MP for East Devon, said; “The constituency I’m proud to represent contains the largest population in Devon and has to change under the rules of the boundary review. I will put forward my views as part of the consultation process as the East Devon constituency will change to reflect a growing population across the area. I voted to ensure Parliament can’t block the final recommendations which are designed to make Parliamentary representation fairer across the United Kingdom.”

MP Neil Parish, whose Tiverton and Honiton ward will be ‘sliced apart’, said that he will have for the final proposals before deciding which of the two new areas he would wish to continue to represent.

He said: “I was not expecting Tiverton and Honiton to be sliced apart. It was certainly a surprise, and this clearly affects my position as the constituency’s MP. My current electorate will be split and so I will no longer be able to represent each of my current constituents. I will have to await the final proposals in full, to ensure I have all the details, before I can make any decisions on whom I will seek to represent within the new boundaries.”

Other changes see to the north of Exeter, the area around Poltimore will move from East Devon into Mel Stride’s Central Devon seat, while minor changes in and around Plymouth have also been put forward.

The proposals from the Boundary Commission for England says the aim is to make Parliament fairer by giving each MP a roughly similar number of voters, which involves redrawing and renaming some seats.

The total number of seats in the House of Commons will stay at 650 but population changes mean England is set to have 543 MPs, Wales 32 and Scotland 57 – that is an extra 10 for England, with Wales losing eight and Scotland’s count cut by two

The review is designed to end the discrepancies in the current system with some MPs having only 50,000 constituents and others having double that, and seats will be redrawn so they have, by law, between 69,724 and 77,062 registered voters each, although some island constituencies, such as the Isle of Wight and Anglesey, being given special dispensation to be outside these requirements.

Commenting on the Boundary Commission review, Professor Richard Toye, from the University of Exeter, said: “The Boundary Commission faces a very difficult task. On the one hand it is obliged to ensure that each constituency must have an electorate as that is no less than 95 per cent and no more than 105 per cent of the ‘UK electoral quota’ (which for this review is 73,393). On the other hand, it must also take into account ‘special geographical considerations’, existing constituency boundaries, and ‘any local ties that would be broken by changes in constituencies’.

“These local ties may provoke strong feelings – for example, a voter who was previously in the Exeter seat may be upset about being reallocated to Exmouth, if they feel they lack connections there. In the past, political parties have been adept at using the public consultation process by manipulating the language of local ties to get the constituency boundaries that suit them best.”

The Boundary Commission is consulting on the initial proposals for an eight-week period, from June 8 to August 2.

A spokesman said: “We encourage everyone to use this opportunity to help us shape the new constituencies – the more responses we receive, the more informed our decisions will be when considering whether to revise our proposals. Our consultation portal at www.bcereviews.org.uk has more information about our proposals and how to give us your views on them.”

A second consultation with public hearings will then get under way in spring 2022, followed by a final four-week consultation on revised plans in autumn 2022.

Final recommendations are due by July 1, 2023, after which the government has four months to implement the plans.