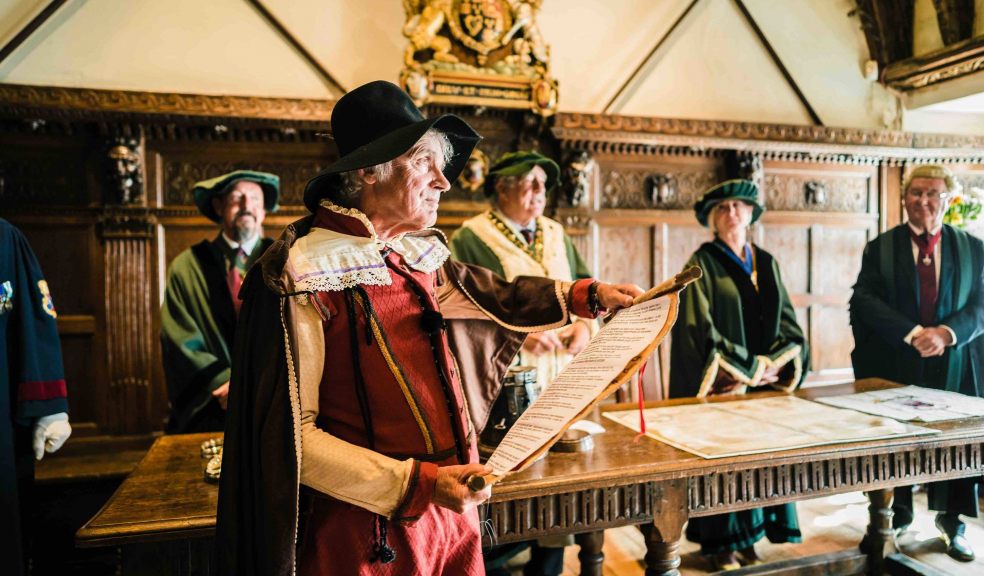 On 3rd August 1620, a sizeable crowd gathered in Fore Street, Exeter in front of Tuckers Hall to greet Thomas Shapcot who had journeyed from London on horseback bearing the Royal Charter granted by King James 1 to allow the Weavers Fullers and Shearmen of the City to become an Incorporation.  This charter gave the Incorporation the seal of approval to become a self-governing body in order to protect the trades and mysteries of cloth-making from outside influences, who had interfered and reduced the quality of Exeter Cloth, affecting the reputation, reducing demand and the price to an unsustainable level.

Tuckers Hall is a unique medieval hall built, owned, and occupied by the ancient guilds of cloth workers since 1471, controlling the manufacture of woollen cloth making and trading in Exeter.  A significant piece of history, The King’s seal of approval helped Exeter to excel, leading to an era of 150 years of prosperity with an increase to over 1,000 pieces of cloth produced a day with 400 master craftsmen belonging to the Incorporation, representing 25% of the nation’s production of woollen cloth.  Exports from the port of Exeter increased, making it the 3rd most important City outside London

On Monday 3rd August 2020, five members of the Incorporation gathered in ceremonial robes outside Tuckers Hall with the original Charter. The current Master Ian Gardner gave a short speech honouring the anniversary of the granting of the Charter which allowed the newly incorporated guilds to become freemen. Jeremy James Taylor MBE, a former director of the National Youth Music Theatre  (NYMT), suitably dressed in 1620-style costume to represent Thomas Shapcot, arrived carrying a scroll from which he read the first line of the Charter: ‘James by the name of God our King of England, Scotland, France  and  Ireland;  Defender of the Faith to whom all these present, shall come greetings.’

Ian Gardner, current Master of the Incorporation of Weavers, Fullers and Shearmen said: “The original Charter is kept at the  South West Heritage Trust, and we are so grateful to them for agreeing to loan it to us on the day.  We also had some historical artefacts kindly leant by the RAMM, including two wooden Tillet Blocks used in the 18th century to mark bundles of cloth; an early trademark which was a many-layered quality control system used when business was booming as Exeter was growing wealthier as a result of the cloth trade to Europe.”

The ceremony was proceeded by a formal unveiling of commemorative railings at the front of Tuckers Hall by Head Warden Nicky Baker, to mark the milestone anniversary. The installation beautifully illustrates the processes from sheep to cloth and the markets to which it was exported. It will act as a signpost to the location of Tuckers Hall with a piece of public art, clearly informing passers-by of the purpose of the building and its importance to the cloth trade. The result is truly unique and will be a notable addition to Fore Street enhancing it as a principal pedestrian entrance to the City-centre and mark the Hall as a ‘must visit’ location.

The members of Tuckers Hall decided to replace the post-World War 2 set of undistinguished wrought iron railings with a new contemporary structure.  It also acts as a signpost to the location of Tuckers Hall with a piece of public art which clearly informs the passers-by of the purpose of the building and its importance to the cloth trade. The result is truly unique and will be a notable addition to Fore Street enhancing it as a principal pedestrian entrance to the City Centre and mark the Hall as a ‘must visit’ location.”

Peter Lacey – a member of The Incorporation explains: “Fortunately, before Lockdown, we commissioned a commemorative replacement set of railings and gate depicting the history of Exeter’s cloth trade from sheep to export.  These, rather like Tuckers Hall, are unique; beautifully hand-made by blacksmith artist, David Tucker. The selection of the artist resulted from shortlisting of some of the finest metal-work craftsmen in the UK. The result is truly exceptional, which showcases by its form and imagery the purpose of the building and skills and crafts it supported.”  He adds: “The visual presence of the new installation, substantially funded by Coastal Recycling Community Fund, will be a key element in the ‘Welcome package’ for future visitors to the Hall and we are very grateful to them as it offers a sense of arrival.”

Exeter was at one time one of the most important centres for woollen cloth in the UK with 7 out of 10 employed in the City.  The impact of this trade has influenced the history of the City ever since, however, this remains little known to many of its present-day citizens and visitors.

“From 1642 onwards, there has been a history of charitable giving by the Incorporation and this continues today.” Said Mr Gardner. “This includes our support to YMCA Exeter, and we are very proud to have recently been in a position to purchase the freehold property Cornerstone in Kimberly Road, to enable Hair@theAcademy, who support vulnerable young people to gain qualifications in hairdressing, continue their good works.”

He concludes: “Officially marking this historical anniversary is an opportunity to educate members of the public on the good works we carry out in the City and for us to be engaging more with the community, researchers, school children and tourists who will, when we are able post-Covid-19, be welcome to visit Tuckers Hall for a guided tour.