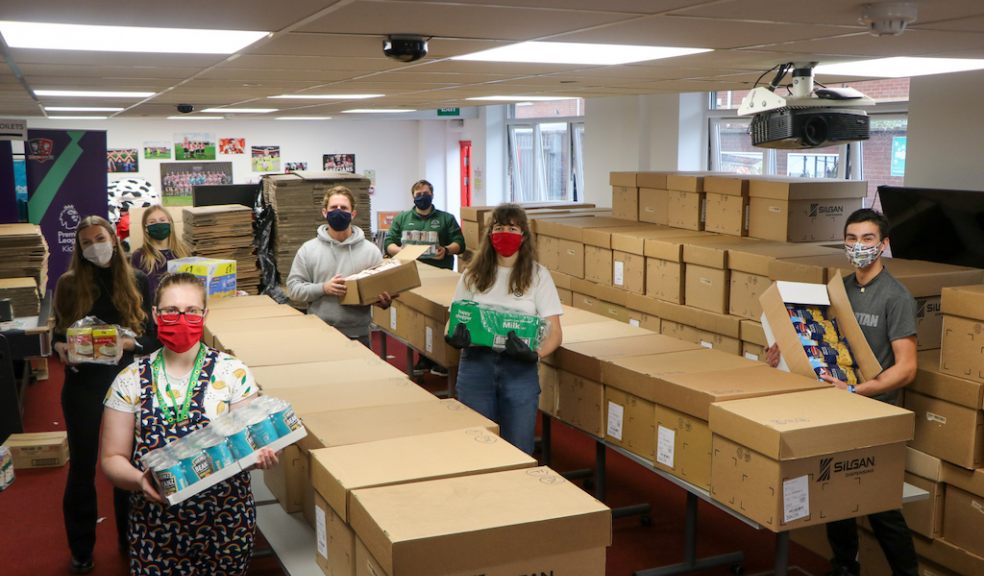 Hundreds of Exeter families facing a bleak Christmas have benefited from two recent initiatives to help them feed their children this December.

CITY Community Trust has been supporting families through the Exeter Festive Appeal. In addition to this, it has provided hot meals and free sports activities to young people attending special PL Kicks sessions.

Over the last two weeks, CITY Community Trust has handed out 400 food parcels, more than 300 books and over 150 toys to local families.

Jamie Vittles, chief executive of CITY Community Trust, said as so many families were struggling to make ends meet this Christmas, the charity wanted to do all it could to help. As well as delivering parcels to schools, they held an open session at St James Park where people could drop in and collect food, gifts and books.

And some were moved to tears when they received parcels.

Jamie added: ‘We had one grandmother come in who was moved to tears by the food and gifts we were able to provide. She had lost her job two months ago as a result of the pandemic, she was doing her best to support her daughter and grandchild and she said, although they had never had much, they had also never asked for anything or received support. She was really overwhelmed by the generosity of the donations and said it would make a massive difference to their family’s Christmas.

‘And this was the case with so many people who we helped - people who were struggling and worrying about how to give their families a decent Christmas. To be able to provide them food, gifts and books as helped ease those worries a little for many people.’

CITY Community Trust partnered with Exeter City Futures to deliver the campaign. The Ted Wragg Trust and the Exeter Learning Academy Trust helped to identify those families most in need. Organisations who supported the programme included Thrifty Car and Van rental, Tesco, Co-op and Amazon. Crediton Community Bookshop, which is a not-for-profit organisation, contributed hundreds of books, and the Rediscover Church, which is based in the city centre, also donated food to the cause.

This week City Community Trust, which is the partner charity of Exeter City FC, has also provided 50 free places to children at risk of ‘holiday hunger’ at its PL Kicks holiday camps, thanks to funding from the Premier League, in partnership with Barclays. As well as free sessions, the participants, who are aged between 11 and 16 have been provided with healthy snacks and nutritious hot meals. The meals have been cooked by the team from the Rediscover Church. The holiday camps are an extension of the weekly Kicks programme sessions which take place in Wonford, Merrivale and Beacon Heath.