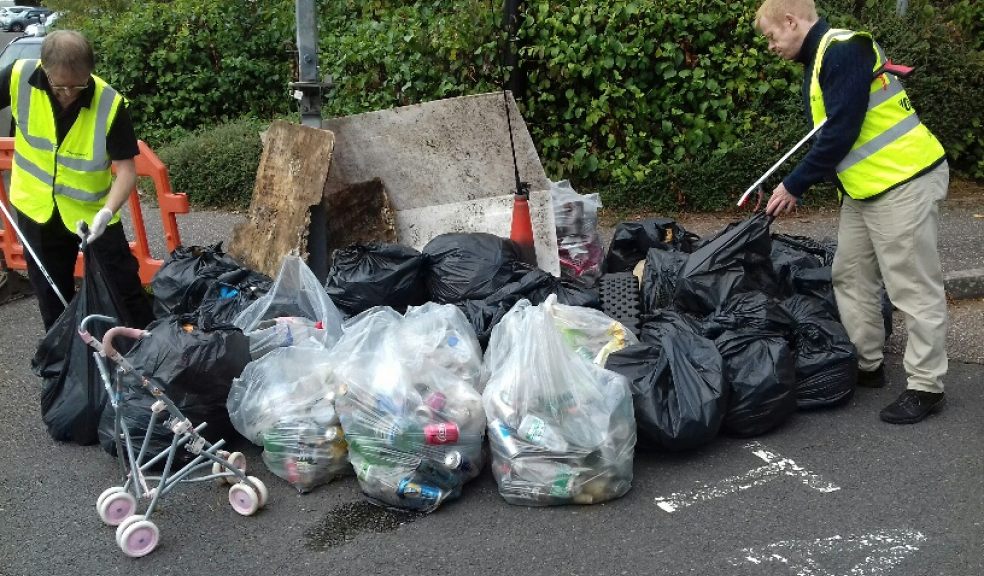 A staggering amount of litter was collected in just one hour on Exeter’s Sowton Industrial Estate last Friday in a joint litter-pick by the Devon branch of the Campaign to Protect Rural England and Devon Norse.

Twenty people took part in the clean up in the area around Bittern Road, where Devon Norse is based. Members of CPRE Devon joined company employees and provided them with the necessary gear: litter-picking sticks, high vis jackets, gloves and bags.

The discarded frame of a child’s pushchair, a tyre, and an empty butane bottle were among the items collected, along with 24 black bin bags of general rubbish and seven clear bags of drinks cans and plastic bottles for recycling.

Director of CPRE Devon, Penny Mills, said, “The CPRE has been campaigning against litter and fly tipping for decades. It’s an absolute blight - harmful to the environment and to wildlife. Our decade-long campaign for a deposit return scheme (DRS) for plastic and glass bottles and drinks cans will help combat the plague of litter blighting our environment - in the same way the ‘break the bag habit campaign’ forced people to rethink their use of plastic carrier bags.”

She added, “We were delighted to help Devon Norse with this worthwhile initiative to improve the area around their office, and we’d be happy to support other local companies with helpers and equipment. It was shocking how much rubbish we collected in the space of an hour.”

Devon Norse is a facilities management and contract services provider, delivering a range of cleaning, caretaking and catering services to private and public service providers. Kristen Brooks of Norse Group said, “We are grateful for CPRE Devon’s support with today’s litter pick as part of the Norse Tidy Up. We knew there was a lot of rubbish around, but it’s shocking to see how it stacks up. It was an hour of our employee’s time very well spent and the task was made much easier by having all the necessary kit provided for us.”