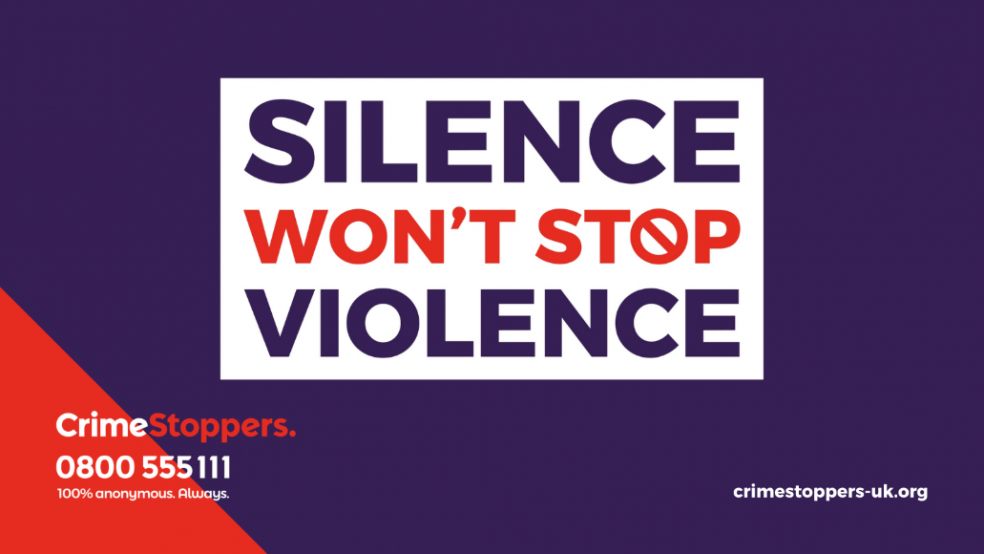 In the midst of a pandemic, there has never been a greater need to protect communities in the South West and our National Health Service from harm. The charity Crimestoppers has this week launched a new campaign with a stark warning that silence won’t stop violence, urging people to speak up anonymously to help save lives.

Crimestoppers highlights a 93% rise in UK hospital admissions for knife attacks on under-16s since 2012.* They also reveal that information the charity has received over the past four years about knife crime has rocketed threefold (340%), whilst firearms info has risen over the same period by a third (33%).

Whilst the health statistics are concerning, the charity notes that over half of all violent incidents are not reported to the police, which prevents them from dealing with the issue.

The ‘Silence Won’t Stop Violence’ campaign aims to break the wall of silence and help reset the status quo on violent crime. Crimestoppers’ response is to raise awareness of the impact of violence and offer individuals in communities a way to speak up about incidents, before or after they take place, 100% anonymously.

Crimestoppers is working with a number of violence reduction units across the UK to support a public health approach to tackling violence, including promoting its youth service Fearless.org.

“Violence in all its forms, has a significant impact on communities in the South West and across the UK; from victims of domestic abuse, to young people carrying knives, its ripple effect can fuel the fear of crime, tear apart families, and overstretch our health service who have to deal with the resulting physical and emotional trauma.

“A public health approach recognises that violence is a preventable problem requiring a society-wide response. We’re supporting this through early intervention and education to help prevent violence happening in the first place. We recognise that you may be close to crime, but may also want to do the right thing and bring violence in your community to an end. If you know who may be carrying weapons or threatening or harming others, you can tell us 100% anonymously.”

The three-week campaign will highlight Crimestoppers youth service Fearless.org, which exists to give young people access to non-judgemental information and advice about crime and criminality. Using the same anonymous guarantee as Crimestoppers, the Fearless.org service provides young people with a safe online place to give information to us about crime - 100% anonymously.

To find out more about the Silence Won’t Stop Violence campaign, visit the campaign page. If you have information about violent crime, including knife crime, call freephone 0800 111 555 or fill in our anonymous online form at Crimestoppers-uk.org to tell us what you know 100% anonymously.

Please note: Computer IP addresses are never traced and no-one will ever know you contacted us. For telephone calls, we have no caller line display, no 1471 facility and have never traced a call.