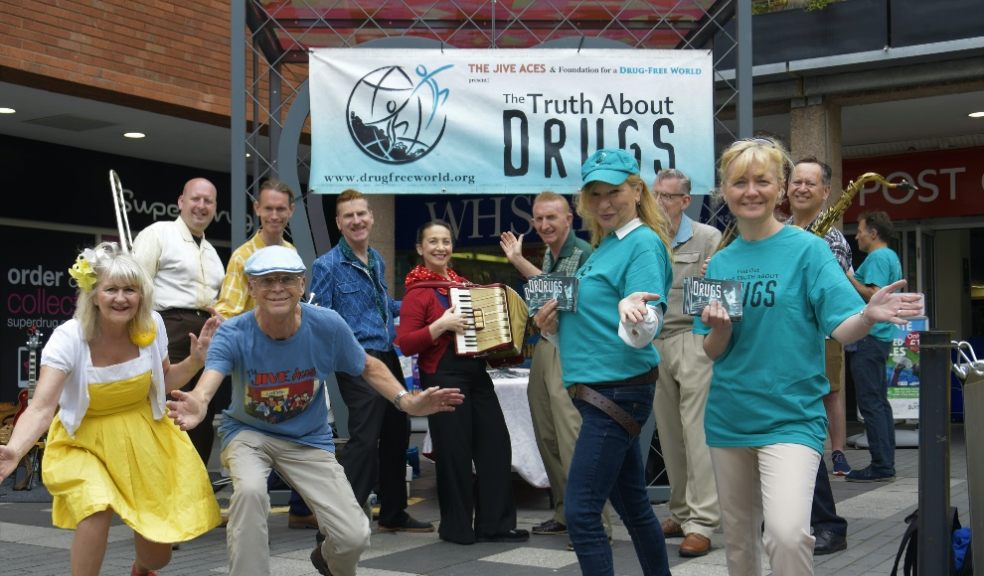 On Saturday 18th June The Jive Aces, UK’s number one jive and swing band and Britain’s Got Talent semi-finalists, performed on Market Square at Guildhall Shopping Centre and gave a free two hour performance to all shoppers with an important message. The Southwest West Lindy Hoppers joined the party with their swinging dance moves and all to show that one can have fun without the use of drugs.

The band have been together for over 25 years and have been taking a stand against illegal drugs for decades. For over 20 years, they have supported the Truth About Drugs initiative, which was launched by the Church of Scientology in an effort to educate and bring about awareness on the dangers of illegal drugs. The programme offers free information about the most encountered street drugs in comprehensible free booklets.

The band, like many other performers, were stuck without shows for two years due to the pandemic, but they kept busy and launched a daily one hour long live-stream.  This one hour, free show ran for a record 500 consecutive episodes. It was called JiveStream, #TheShowMustGoOn.

Ian Clarkson, lead singer of the Jive Aces said, “There are some who look up to musicians and see them taking drugs and think they have to use drugs to get inspired or be great artists. What they might not realise is that without drugs they would be a lot happier, play or perform a lot better and live a longer and healthier life. Their wellness and mental health gets compromised. Like most artists we want to change the world for the better through art.”

The devon-cornwall.police.uk site reports that a third of all property crime is related to drugs. Further the police website gives the Commissioner's priority: Drugs. Drugs can have a devastating social impact on community life and on those who are dependent upon them. “My office regularly hears from people whose quality of life is adversely affected by drugs, be that when loved ones become addicted or victims, businesses suffer because of what is happening on the streets, or due to the financial hardship which often is associated.” (Ref: https://www.devonandcornwall-pcc.gov.uk/plan-and-performance/police-and-crime-plan-priorities/drugs/)

And in January DevonLive published “Driving under the influence of drugs and/or alcohol is listed by the police as one of the 'Fatal Five,' alongside not wearing a seat belt, using a phone, speeding and being careless…The fatal five are responsible for a huge portion of the most serious injuries and deaths on roads across the country.”

On a positive note, around a thousand booklets were distributed and this is what people receiving the booklet while enjoying the performance had to say:

A teacher stopped by and said that he was very happy to pass on these booklets, so he took some to give to his colleagues. He was grateful for the message of the campaign.

A group of young marine cadets took the booklets and really understood the importance of the message. They said they have some friends on drugs and could see the adverse effect these had on them.

Stewart, a musician, said he was very impressed with the Jive Aces and that they are the best band he's ever listened to for this type of music. He was also impressed with the campaign and said the band are forwarding an important message which is making people aware of the effect of drugs.

For more details on the Truth About Drugs visit: https://www.drugfreeworld.org/

For more details on the Jive Aces visit: https://jiveaces.org/