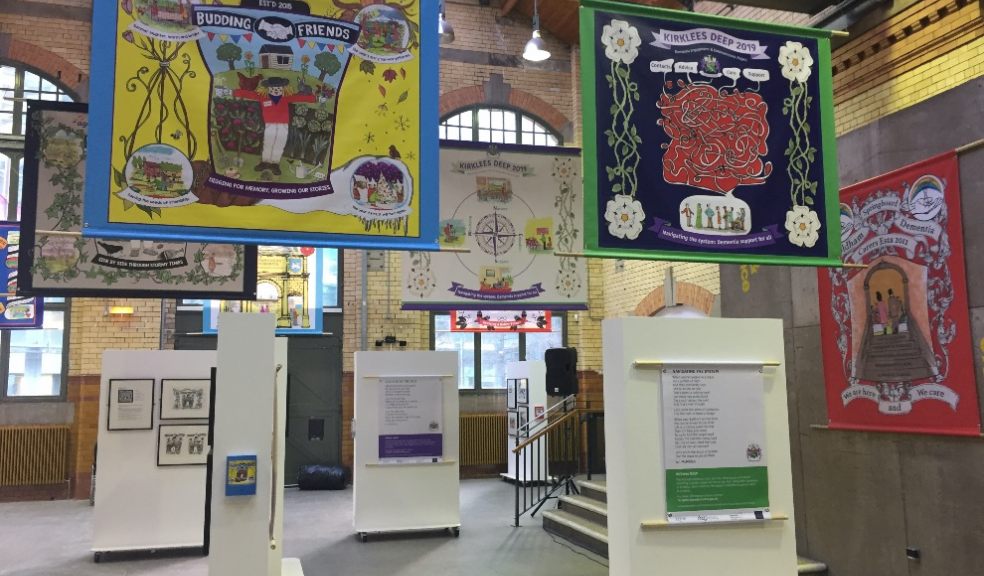 Banners created by people living with dementia who worked with a trio of well-known artists will be on display in Exeter until the end of March.

The banners, including one developed by members of Age UK Exeter’s Budding Friends group, are on show as a special exhibit in Exeter Library.

Photographer Ian Beesley, poet Ian McMillan, and cartoonist Tony Husband worked with people living with dementia and their carers to create the banners as part of the ‘A Life More Ordinary’ project which originated from research at the University of Exeter. The project aims to support people to live as well as possible with dementia.

Through the project, the artists have worked with a number of groups of people affected by dementia around the country, including Exeter, Kent, Oldham, York, Leeds, Bradford and Scarborough, taking a different approach in each area tailored to the group. Banners made by some of these groups are now on display in the library.

The Exeter banner was originally unfurled at a special event at Age UK’s Exeter Centre in April 2019.

The first banner was made with a group in York. Photographer Ian Beesley said “The banner that the York group created was so striking and so effective that all our other groups wanted to create their own banners. Banners are powerful symbols of self-reliance and tangible proof of existence and as such have proved to be a fantastic way of articulating many of the problems faced by people living with dementia.”

Professor Clare said: “It’s wonderful to see the culmination of this project. It is closely connected with our research programme, which has the key goal of supporting people to live as well as possible with dementia. Both the artists and the people affected by dementia have done an incredible job in coming together to create content that challenges the public perception of dementia as a downward spiral from diagnosis. We hope people will view the banners and ask themselves whether they can understand the needs of people with dementia better, and support them in their needs.”

Martyn Rogers, Age UK Exeter’s Chief Executive, said “It’s amazing to see the banner returning to Exeter as part of the ‘Unfurlings’ touring exhibition. It was fantastic for the project to have the input of three such great creative talents. Together they looked, listened and reflected on the difference our Budding Friends service made and continues to make to lives of its members, and they have created this remarkable banner as a lasting reminder of the fun, joy and shared support the project offers.”

The banners will be on display until 31 March at Exeter Library.