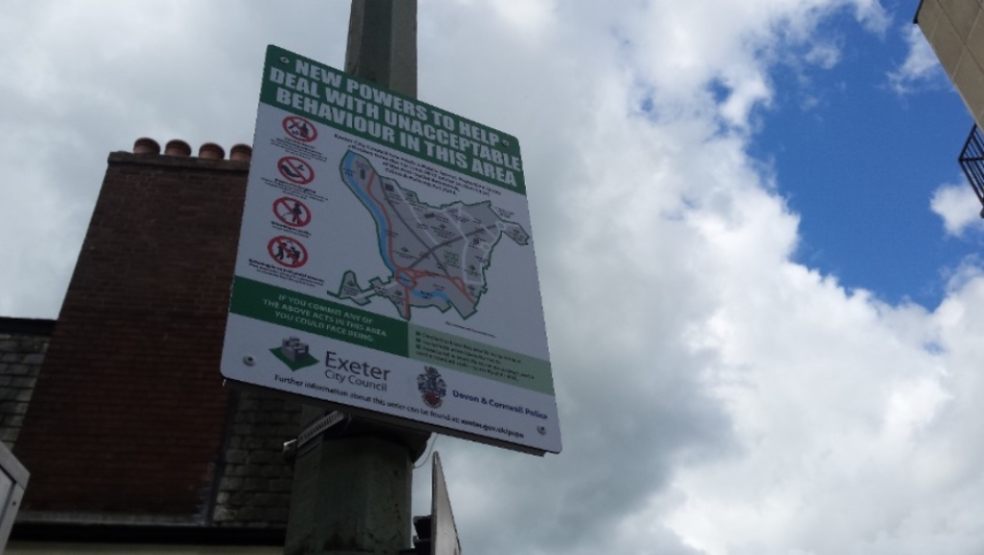 Anti-social behaviour in Exeter is continuing at an “unreasonable” level, leading to a tightening of the city’s public space protection order.

The order, known as a PSPO, which outlaws certain types of anti-social behaviour in the city centre, was introduced in June 2017. It applies to everyone but currently only people in groups of two or more can be dispersed.

Following a consultation, the city’s council executive this week agreed to changes from June which will mean individuals can be forced to leave the area, while also increasing the length of the orders from six to 24 hours.

Areas covered by the PSPO include Fore Street, the High Street and Sidwell Street. Anyone breaching the order by consuming alcohol or committing anti-social behaviour will be moved on and could faces fines of up to £1,000 at court if they return.

PSPOs are one of the tools available under the Anti-social Behaviour, Crime and Policing Act 2014. Offences under the act include ignoring police requests to stop drinking alcohol or illegal drugs in public, aggressive begging, urinating in a public place or behaving in anti-socially.

A report to the council’s executive this week said: “It is clear that whilst the PSPO has had an impact since its introduction in 2017, the prevalence of persistent and problematic anti-social behaviour continues to be relatively high in the area of the order.”

From its introduction until the end of 2021, 49 fixed penalty notices were issued for street urination, 592 people have been dispersed and 34 prosecutions have been taken for breaches of the order.

The report added: “Despite less footfall in the PSPO area due to covid restrictions, anti-social behaviour reports have not significantly decreased.”

“Data from police logs and from the Exeter Business Against Crime Partnership provides evidence that anti-social behaviour complaints are of such a volume that they continue to have or are likely to have a detrimental effect on the quality of life of those in the locality.

“These anti-social activities are continuing at a level that is unreasonable and justifies the continuing restrictions of the order.”

The document explains a desire to amend the order so that individuals can be forced to leave the area, rather than the current policy permitting dispersal only of groups of two or more.

“Over the last 18 months, it has become increasingly apparent that there has been a significant increase in individuals acting in such a way that has caused or is likely to cause a member of public to suffer harassment, alarm or distress by that behaviour.

“However authorised officers have been hampered in using the dispersal powers contained within … [the] current order because the individual is not acting in a group.

“It is felt that amending the current order to enable authorised officers to use dispersal tools on individuals breaching [the rule], would be an effective tool in tackling anti-social behaviour.”

On extending the maximum time that a dispersal may last to 24 hours from the current six hours, it adds: “Whilst this has proved an effective time period for some cases, there have been a significant number of cases where six hours has unfortunately not been effective and subsequent breaches have occurred.”

The council’s executive unanimously backed the changes. The new PSPO will run from this June and for three years.