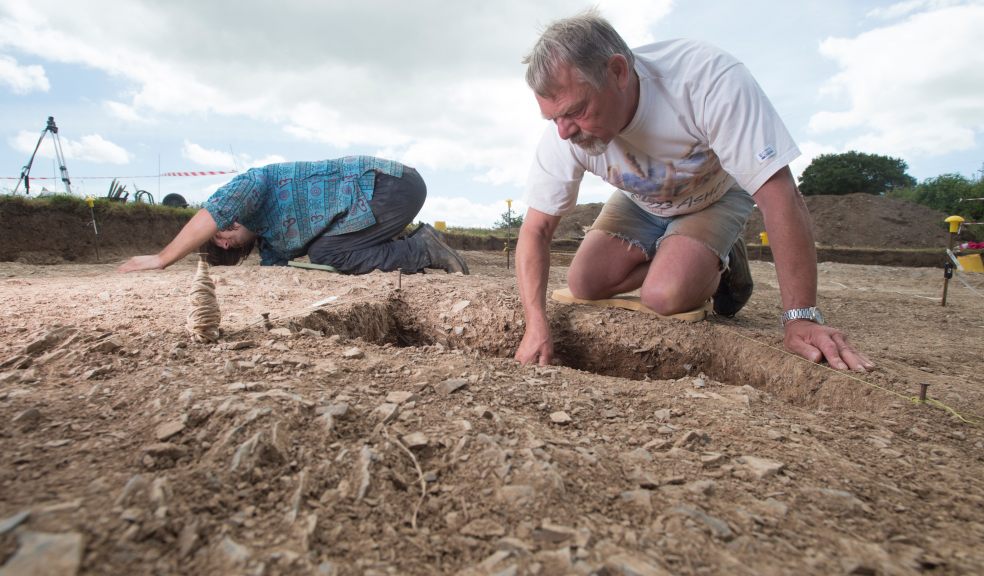 The 200th volunteer has joined the search for more clues about the Roman occupation of Devon at a major archaeological dig in the county.

Members of the community and experts from the University of Exeter are once again investigating fields near Ipplepen, in South Devon, to discover more about a site occupied by Iron Age, Roman, and early medieval communities who lived more than a thousand years ago.

The public can see historical treasures uncovered during this year’s excavations at an Open Day on Saturday 8th September. People will be able to have a tour of the excavation, see some of the finds, and talk to members of the excavation team and two re-enactment groups who will reconstruct what life was like for the Roman army and farming communities.

University of Exeter archaeologists have been excavating different parts of the site during the past seven years and are digging again this month. They are joined by members of the local community who are helping them to excavate the area thanks to support from the National Lottery. Since exploration of the site started in 2012, 200 people have volunteered to help uncover its secrets.

Professor Stephen Rippon, from the University of Exeter, who is leading the archaeological work, said: “From the start of this excavation it has been great that so many members of the local community have been able to get involved. National Lottery funding has allowed us to increase the number of local people who can come and take part in the excavation itself, as well as expanding our programme of activities aimed at local school children.”

So far work has uncovered Iron Age roundhouses, a Romano-British settlement and associated field system, Roman road, and an early medieval cemetery. This year the team are exploring the southern part of the site where traces of a settlement have been found that was occupied during the final years of Britain being part of the Roman Empire.

National Lottery funding has allowed the University of Exeter to expand its work with local communities. For example, in 2018 the excavation will play host to groups of pupils from Abbotskerswell and Ipplepen Primary Schools, and by members of the Somerset and Torbay Young Archaeologists Clubs.

During this year’s Open Day it is expected that the 5,000th visitor will be welcomed. The Ipplepen Carnival Club will be running a refreshment marquee, and hot food will also be available.

The Open Day is free and runs from 10.30am to 3.30pm. Directions to the site will be signposted on the day from Ipplepen on the A381 Newton Abbot to Totnes road.

Volunteer Peter Brown said: “I love archaeology so for me having the site at Ipplepen on my doorstep is very exciting.  To be given the opportunity to participate fully in the excavations and in some small way add to the collective knowledge and understanding of the period and the site is an exhilarating honour and privilege.”

Volunteer Hilary Down said: “I have lived in Ipplepen for over 40 years and already knew a fair bit of the village’s history so I jumped at the chance to learn more by volunteering on the dig in 2012.  Since then I have volunteered every year and I absolutely love it. I was a complete novice but University of Exeter staff and other experts have shared so much of their knowledge and taught me some of the basic skills of archaeology.

“Little did I think, when I retired, that I would be spending a week each summer excavating an Iron Age roundhouse and a Roman road. This year we are opening up a new area and I can’t wait to see what else this fascinating site has to offer. It has also been great talking to so many archaeology students and hearing of their plans for the future. It seems the profession is in safe hands with so much enthusiasm and commitment from the younger generation.”

Volunteer Mary Terry said: “I have been volunteering for the Ipplepen Dig for many years and always look forward to meeting up with friends I’ve made each season and getting to know new volunteers and, of course, the students – who are always willing to  lend a helping hand.  The opportunity to learn new skills is always good. Archaeology has always been my passion and it is so rewarding having the chance to work alongside professional archaeologists on such an important local dig. The annual Open Day is a great opportunity for local villagers and those from further afield to come and have a look at what new discoveries have been made and also to have the professionals on hand to answer questions.”

Volunteer Janet Oke said: “I’ve been digging at Ipplepen since 2014, when learning the techniques of field archaeology was a compulsory module in the degree course I was studying at the University of Exeter. I graduated in 2016 but keep coming back every year. Ipplepen’s story is probably representative of many villages in the southwest, but special circumstances make this a uniquely fascinating and revealing place to dig. Every year we turn up, find new clues, and learn more. It’s addictive.”