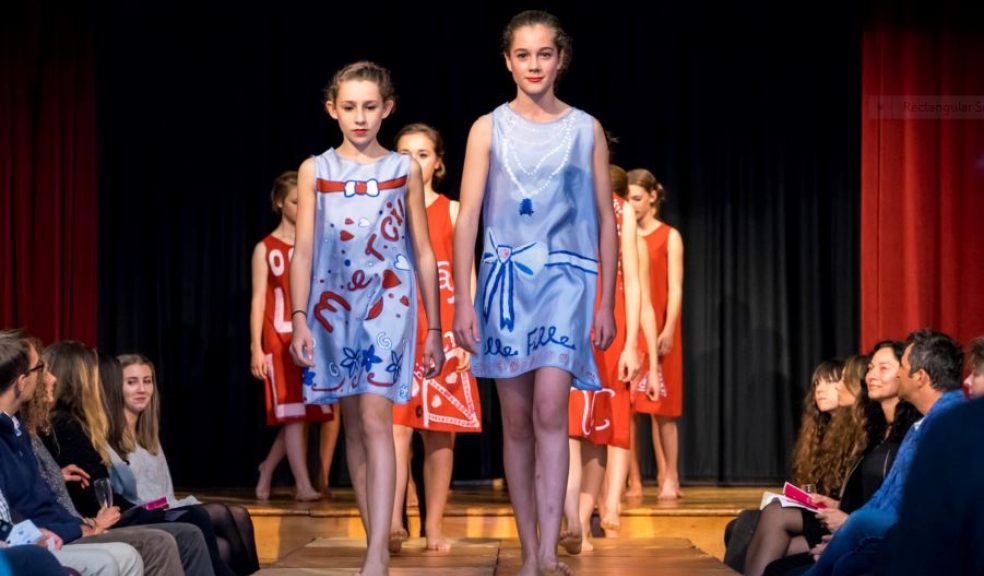 The Charity Fashion Show on 8 October at The Maynard School been hailed a sensational success, raising nearly £1000 for the education charity, Plan UK.

Organised by Sixth Form student, Lucie Rising, from its conception to completion, the show boasted a distinctly French theme to celebrate the close of Paris Fashion Week the previous day.

“I love French fashion and wanted the Show to be chic and classy but it was important to find a theme that all our students could relate to,” explained Lucie. “Girls could enter their own designs into four different categories but they didn’t necessarily have to model them as I had a whole pool of keen models wanting to strut the catwalk!”

Lucie, 17, hopes to pursue a career in the fashion world after her A-levels next year and organised the whole Fashion Show as part of her Extended Project Qualification. “I had no idea just how much work would be involved but I’m completely thrilled that it was such a success!”

Tickets for the Show sold out in just a matter of days and the Main School Hall was filled to capacity by keen spectators hoping to support Lucie and her charity. The Show opened with the Oh La La Collection, a delightful display of dresses designed and inspired by French culture. This was followed by the L K Bennett sponsored category in which girls could put together their own outfits in the French theme or borrow from the Princesshay store. For many, however, the highlight of the night was the Newspaper Collection in which girls designed an outfit made from newspaper on the stage in front of the watchful gaze of the audience.

Automotive photographer, Dominic Fraser, who through his own career is no stranger to glamour, was bowled over by the Show. “It was a complete sensation. It was so much better than your average school show and I really couldn’t believe just how brilliant it actually was! Lucie did so well getting such perfectly suited sponsors. Having Bobbi Brown do the make-up and the Amanda Marsden Salon on hair duties added just the perfect finishing touches to the best event at any school I’ve ever visited!”