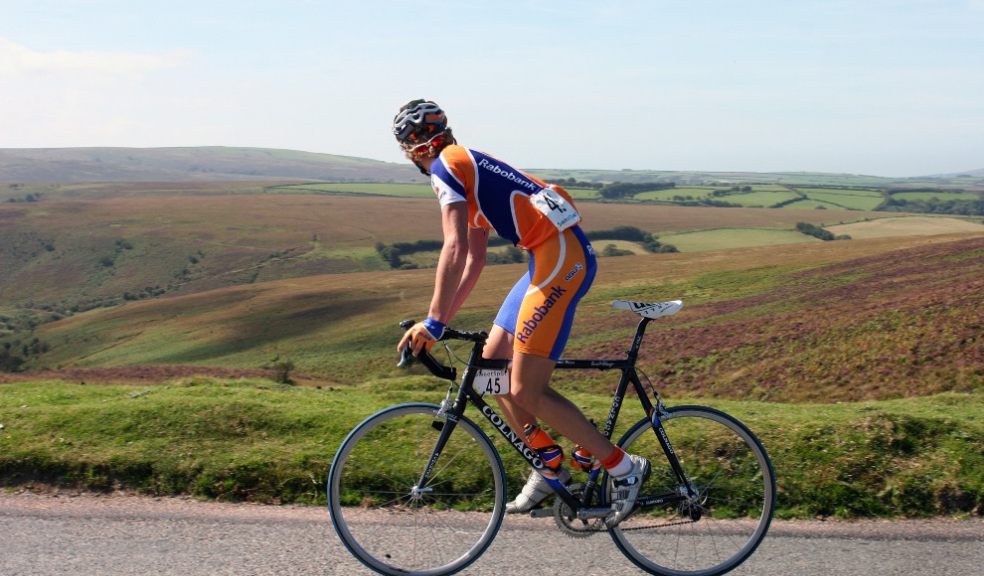 The Tour of Britain may only fleetingly race through communities as it makes its way through Devon, but it has left a much longer-lasting legacy in many parts of the county.

Since The Tour first sped into Devon in 2007, the county has provided the setting for some of the most exciting moments in The Tour's history.

Watching the world's best cyclists tackle some of Devon's toughest climbs has often been the "high-point" of the race in every sense. As well as the enduring memories for the spectators at the roadside, the impact of The Tour remains apparent today.

Exmoor featured in the early years of the modern edition of The Tour, when Devon co-hosted South West Stages with Somerset, but its presence can still be felt with the Exmoor Cycle Route https://www.visit-exmoor.co.uk/get-active/cycling

The permanent circular route takes in some of the climbs used in classic Tour stages and it continues to attract cyclists looking to take on the challenging terrain.

Dan James, Rural Enterprise Manager at Exmoor National Park Authority, said: "The Tour showed Exmoor at its best and it definitely put us on the map for cycling. For me, one of the enduring images is of one of the professional riders on The Tour staring out at the view – even he took that moment to admire the beauty of Exmoor. Exmoor is deeply rural, we have stunning scenery and great community spirit, and for us it was really good to see schools and people in small villages getting involved with The Tour; it really made it an exciting race.

"It's hard to quantify, but anecdotally cycling has increased on Exmoor since The Tour raced through here, and 14 years on, we still have the Exmoor Cycle Route. It takes in some tough challenges – Porlock Hill and Lynmouth - but the beauty of the route is its simplicity; it's a big circuit of Exmoor. Many people like the fact it's a tough ride and they're following in the tyre tracks of some of the world's greatest cyclists."

In Ottery St Mary, in East Devon, Chineway Hill featured as a King of the Mountain (KOM) climb in both 2016 and 2018, inspiring the launch of cycling events for the wider community – including a hill climb Time Trial on Chineway Hill.

John Campion, who is among the organisers of the community events in Ottery St Mary, said: "The Tour has come through Ottery twice and it was the first time in 2016 that triggered our thought that we should have some sort of event for cyclists in the town. Because we weren't affiliated with British Cycling we joined forces with Chard Wheelers, who helped us put on the first event at Chineway Hill in 2017. We also had sponsorship through local businesses and shops and they were very good in coming forward. While in Devon, cyclists will often ride Haytor and Widecombe, and we wanted them to come to Ottery and cycle Chineway Hill."

As well as a hill climb in 2018, the cycling celebration grew to try and increase the involvement of children, with a demonstration by the Exeter Cycle Speedway team at the Land of Canaan car park in the town, and mini-races for over-10s.

"It was such a success that we were asked to put on a cycling event at the Primary School and that has continued every year since with around 80 or 90 pupils taking part," added John. "It's important to help youngsters to get out and do something. It's another event for those who might not be involved in playing football, it gets them involved with others and they're getting exercise.

"We'll never really know if The Tour or our events prompted anyone to take up cycling or return to cycling, but the school children were all talking about it and they turned out in huge numbers."

Josefina Gori, another of the event organisers in Ottery St Mary, said: "The Tour is a unique event that you don't have the opportunity to see locally all the time, and it put Ottery on the map. Everybody wanted to ride the hill at Chineway because it was a King of the Mountains climb, so we thought why not make it an event. The event was combined with a breakfast so it gives an opportunity for the town to make money, especially as it brings people in from far away.

"The hill climb, the cycling events at the Land of Canaan and at the school are all as a result of The Tour coming here. It's important that we keep it going and potentially help children into the sport."

In September 2019, the Chineway Hill Climb became the first stage of the "2019 Three Hills Championship" where riders had to conquer three different stages starting with Chineway Hill in Ottery, followed by the climbs at Haytor and Widecombe. However, like many events, the Chineway Hill climb event was cancelled last year due to the Coronavirus pandemic, but plans are already underway for a return next year. In the long term, the ultimate aim is for the town to one day become home to its own amateur cycling club.

Dartmoor first made its indelible mark on The Tour in 2010, as part of a 110-mile stage from Tavistock to Glastonbury, and the National Park has featured five times over the years.

The moor's landscape is one of the reasons why Devon has earned a reputation for serving up punishing, picture-postcard "parcours" for its Stage routes.

When The Tour of Britain celebrated its tenth anniversary in 2013, Haytor provided the setting for the first summit finish in the modern era of the race. A young Simon Yates, then riding for Great Britain, took the honours on the day after edging away from a small group which contained race leader Sir Bradley Wiggins, and it was a victory that produced some iconic images of the race.

Dartmoor continues to prove a popular destination for cycling tourism as well as The Tour, and its inclusion in the race again this year coincides with the National Park's 70th anniversary celebrations.

Andrew Watson, Dartmoor National Park's Head of Access, Recreation and Estates, said: "We are delighted that the Tour of Britain is returning to Dartmoor in September. The extensive coverage of the Tour provides us with a fantastic opportunity to show Dartmoor in all its glory to a worldwide audience. The Tour has inspired many more people to explore Dartmoor by bicycle and e-bicycles, giving a welcome boost to all our businesses that provide those pit stops for that well-deserved tea and cake.

"We also have some great traffic-free routes for all abilities including the recently re-launched Dartmoor Way, The Wray Valley Trail and the ever popular Granite Way. We hope people will be inspired by the landscape and will consider leaving their cars at home and explore Dartmoor by bike following the Leave No Trace principles."

When The Tour last came to Devon in 2018, the new town of Cranbrook in East Devon hosted the start of Stage Two.

The build-up to the event captured the imagination of many new community groups that had formed in and around the town, including Cranbrook Cycle Club. Club members rode the equivalent 174km distance of the Devon Stage of The Tour on static cycle trainers at the local Cranberry Farm pub to raise money for charity.

The club organised a Couch to 50km programme inspired by the Healthy New Towns initiative to encourage new or returning cyclists to get on their bikes, culminating in a 50km ride from Cranbrook to Exmouth and back. On the morning of the Devon Stage, the finishers were awarded medals on The Tour of Britain rider sign on stage, introduced by local resident and former Tour of Britain official finish line commentator Joe Fisher.

Not only that - but some of the Cycle Club members also had the honour of leading out the pro riders in the peloton. They formed a procession along with some of the couch to 50k participants and members of the Cranbrook Active Mums cycle network with parents pulling their children in cycle trailers.

Cranbrook Cycle Club Chairman Paul Keatley recalls: "It was an honour for me to present medals in my Club kit in this greatest of cycling arenas, but also to promote our Club's activities to residents and visitors to Cranbrook in an interview on stage with my good friend Joe.

"While hosting a stage of The Tour of Britain might be a once in a lifetime experience, the memories of the spectacle of the pro-peloton coming to Cranbrook on that gloriously sunny morning are ours to keep forever."

The Tour inspired an increase in CranbrookCC membership, and the ability to provide Club rides with multiple groups to suit a variety of abilities, female-only rides, and another Couch to 50 km programme in 2019.

The club now regularly hosts 10-mile time trial events in collaboration with Exeter Wheelers, Sid Valley, and CS Dynamo Cycle Clubs. This has enabled the club to offer competitive riding to more experienced cyclists while providing an opportunity to those new to racing to try a time trial event.

Since the easing of coronavirus restrictions there has been a resurgence in activity within CranbrookCC including new members, the introduction of Saturday social rides, and three-monthly cycle challenges that have already featured tough segments of the Devon Stage of the 2018 Tour of Britain.

Paul added: "The success of the Couch to 50 km programme and Club 10 time trials have been a major part of a lasting legacy of the Cranbrook CC's activities to engage the local community, the success of which would not have been possible without the many hours of dedicated voluntary work of the Club's Committee and Members."

The cycle club is also proud to have its very own "yellow Tour of Britain bike" in Cranbrook, which remains a well-known feature of the town and the Club routinely uses it as a meeting point for its Club rides, as well as Club photographs.

Councillor Stuart Hughes, Devon County Council Cabinet Member with responsibility for cycling, said: "The immediate impact of The Tour is the money that it generates and since Devon first featured in the race in 2007 it has brought in over £41 million to the local economy, as more than 1.7 million people have watched the race in the county in that time. When you combine that with the TV coverage of Devon beamed worldwide it really is a fantastic showcase for our beautiful county.

"But I'm equally pleased that the lasting legacy of The Tour is still evident in Devon today. Dartmoor and Exmoor are great places for people to explore and it's great that so many people are choosing to do that on two wheels. And Ottery St Mary and Cranbrook are great examples of how our communities have been inspired by this incredible event. It shows how The Tour can encourage people to get involved in their local community, be more active and improve their health and wellbeing."

Mick Bennett, Tour of Britain race director, said: "We talk about the Tour of Britain inspiring people and leaving a lasting legacy and the stories from Devon are a testament to the impact that the race has had in the county over the past decade. Not only have the Devon stages of the Tour of Britain given us fantastic memories, photos and TV pictures but more importantly they have contributed to inspiring communities across the county. Long may it continue!"

The 2021 Tour of Britain is due to take place between Sunday 5 and Sunday 13 September 2021, starting from Penzance in Cornwall and finishing in the city of Aberdeen.

You can look back at the Devon stages from over the years, and view a highlights video, at https://www.devontourofbritain.co.uk/stages/