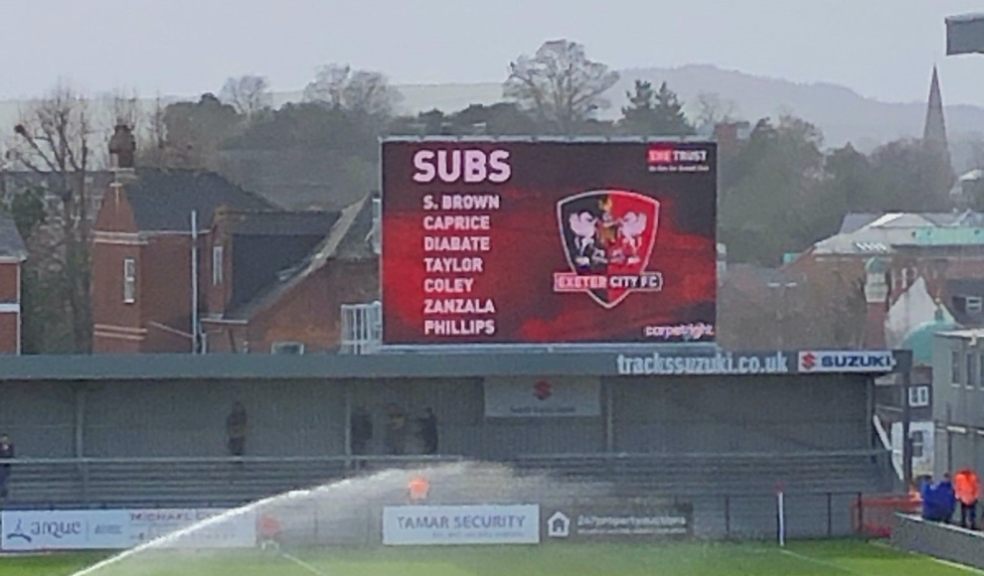 The club was given permission for the 29 x 17-feet (8.64 x 5.12 metre) LED screen by the city council around the start of the season last August, but delays meant fans had to wait until Saturday to see it in action for the first time.

It is situated behind the St James Road away end, nearest the recently built Stagecoach Adam Stansfield Stand, and will include pre-match videos, team news, the attendance figure and the score/timer during the match.

The club believes the screen will improve the matchday experience for supporters, whilst also providing additional sponsorship opportunities.

They say there is also scope for it to show the stadium announcer on the screen, as well as half-time/full-time scores and the potential for goal replays.

The screen forms part of a plan to generate average crowds of six thousand fans, dubbed ‘Project 6000’, which the Grecians say will enable them to become a sustainable League One club if promoted.

They were relegated from that division in 2012.

Exeter averaged crowds of 4,847 in the 2019/20 season before covid forced its curtailment, while Saturday’s game against Salford attracted a bumper 5,775 supporters.

Following the sale of several academy players in the last few years, including millions of pounds from England and Aston Villa striker Ollie Watkins and Wales international Ethan Ampadu to Chelsea, who is currently on loan to Italian club Venezia, the club has made a series of ground investments.

Last year, when the club announced the new screen, Supporters Trust chairman Nick Hawker said: “We often hear requests and discussion from our fans regarding a digital scoreboard and it is something we have been exploring for some time, so we’re really pleased to be able to inform people of that decision.”

Last summer, major work was carried out to improve the playing surface at St James Park, while money is also being spent on improving the club’s Cliff Hill training ground at the Cat and Fiddle near Exeter.

However, work has been delayed after a modular building manufacturer pulled out of the contract.

A new provider will now be needed for the £2.2 million project to replace a dilapidated wooden structure built in the 1970s.

Exeter City Football Club’s board expects to make an announcement about progress by the beginning of April.