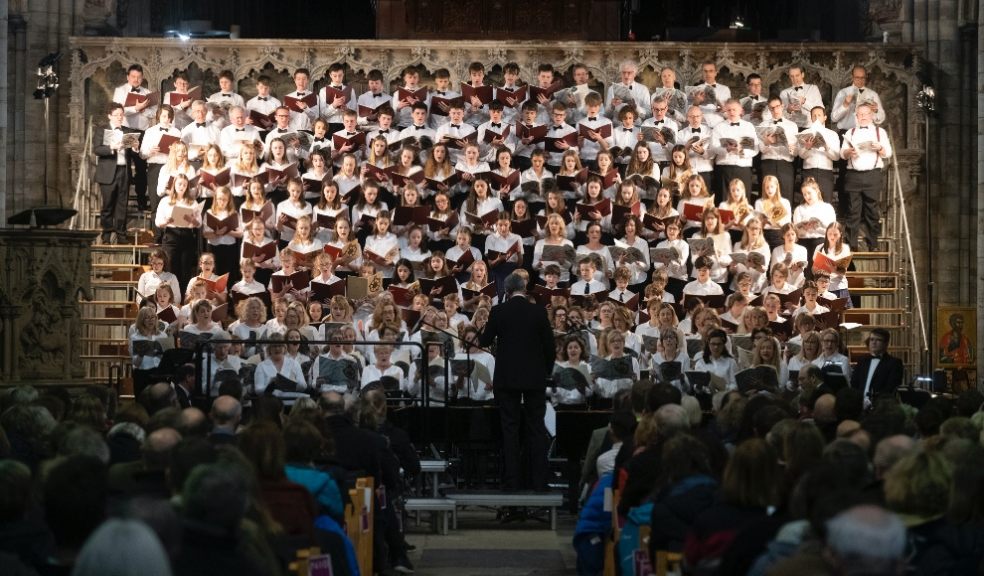 On Thursday 17 March 2022, the Exeter School Choral Society will be performing in the magnificent setting of Exeter Cathedral, reprising a previously annual tradition that had been halted by Covid19. Themed in honour of Her Majesty, Queen Elizabeth II, this enchanting evening will feature a selection of pieces designed to reflect and celebrate her Platinum Jubilee.

In addition to the main chorus, made up of pupils, parents, staff and guest singers, the concert also features the middle school choir, chamber choir, pupil soloists, the Exeter School Symphony Orchestra as well as a professional orchestra. For many performers, it is a true family affair and this year, all five members of the Hemmings family will take to the stage, making music all together in concert for the first time. Caroline and Adrian Hemmings live in Crediton, with their children, sixth former Christopher, Dominic who is in the Upper Fifth, and Sebastian, an Upper One pupil, who is one of the youngest performers in the concert.

The programme features five pieces of music with a regal theme, including music first performed at Her Majesty’s coronation. There are a number of favourites from the choral repertoire, including Zadok The Priest and The King Shall Rejoice from Handel’s Coronation Anthems, the triumphant I Was Glad by Parry, movements from Mozart’s Coronation Mass and the more contemporary classic, Gloria by John Rutter. The middle school choir, which features pupils from 11 – 14 years, will be performing Gary Barlow’s Sing, whilst the older singers in chamber choir have opted for Britten’s Jubilate Deo.

The professional orchestra, many of whom are specialist instrumental teachers at Exeter School, will be joined by the school’s symphony orchestra to perform Walton’s Crown Imperial, forming a mighty group of approximately 100 instrumentalists.

Many of the school’s sixth form singers will be taking solo, duet or trio roles, while the famous soprano solo within the Agnus Dei movement in the Mozart mass will be performed by A Level musician Ciara Morris.

Exeter School’s Director of Music, Peter Tamblyn, said that singing in the cathedral was an exciting prospect for the pupils.

“I am very proud of all of our talented children who have contributed to the rehearsals with such enthusiasm and commitment for this concert,” he said.

“After a gap of two years, this will be a particularly special event and an enormous amount of energy has been thrown into ensuring we deliver an evening to remember.”

Once again, we are indebted to Packexe for their generous support of this concert for the eleventh year.

Tickets are available at the Exeter School box office: (https://www.exeterschool.org.uk/about-exeter-school/box-office) 01392 307080