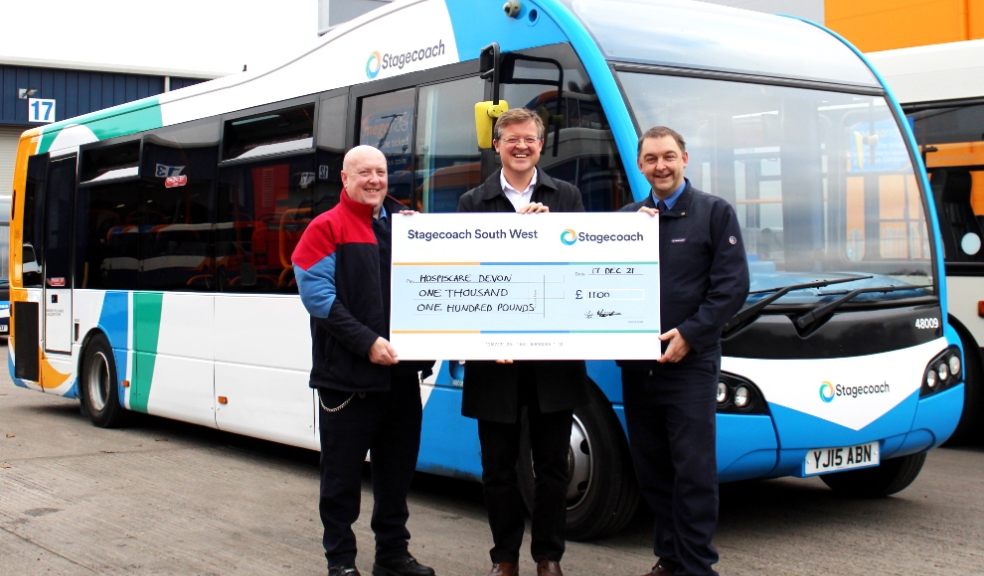 Stagecoach drivers and RMT union representatives across Exeter recently organised a collection, seeing a fantastic £1100 donated to local charity Hospiscare, topped up by their Stagecoach MD.

Several weeks ago, saw the company and union in pay talks, with local strike action planned for Monday 18th October.  As the union were preparing for the proposed strikes, they realised that some drivers may be out of pocket if they took part in the action, so they organised an initiative to help fund those affected.

RMT Rep Ian Hodge and Matt Hackett said ‘We all obviously hoped that talks would be resolved, and we’re so happy they were, but we knew we needed a Plan B and we wanted to make sure our staff were looked after. We asked any people who would not be affected financially to donate to the collection, so the pot could be divided amongst our staff who would be most affected.’

Matt Hackett took the lead, whilst the chaps had discussed the initially plan, it was Matt who dusted off an old biscuit tin, and went around amongst the Exeter driving team to see who could contribute. ‘The overriding reaction amongst our team was a willingness to help each other out, our staff show a real togetherness that you don’t often see, and its humbling to a part of.’

The pay talks were resolved ahead of proposed strike action with the company and RMT agreeing on a deal with no changes to conditions and an increase of 4.4% for drivers across the South West. With the dispute being resolved the RMT soon realised that the kitty they’d raised could be donated to a good cause. Matt spoke to other drivers and Stagecoach Managers to see if anyone else wanted to contribute to the collection.  Efforts managed to see the kitty get to a fantastic total of £605.84 for donation.

Matt added ‘We wanted to make sure the funds we raised went on to a worthy cause. We had a chat with Mike Watson, Stagecoach South West Managing Director, about our plan to donate the money we’d raised, and he immediately said he’d match our total. It was great that the RMT and Stagecoach could come together to support a local charity.’

RMT representative Jamie Nickles added, ‘We’re really pleased, that after the differences felt over the pay disputes, we have found common ground and an opportunity to work together to make a difference to an important cause. Hospiscare is a charity close to our hearts, we’re pleased to be able to give the funds we’ve collected to help in their amazing efforts.’

Stagecoach South West Managing director Mike Watson said ‘I’m really proud of the way our teams work together and support each other. I’m delighted that the money our teams have raised is going to help a vital cause. Hospiscare is a truly important charity in the communities we serve, who many of our staff and customers I’m sure have been supported by through unimaginable times. I’m grateful that our staff have been able to raise funds to help them continue the incredible work they do.