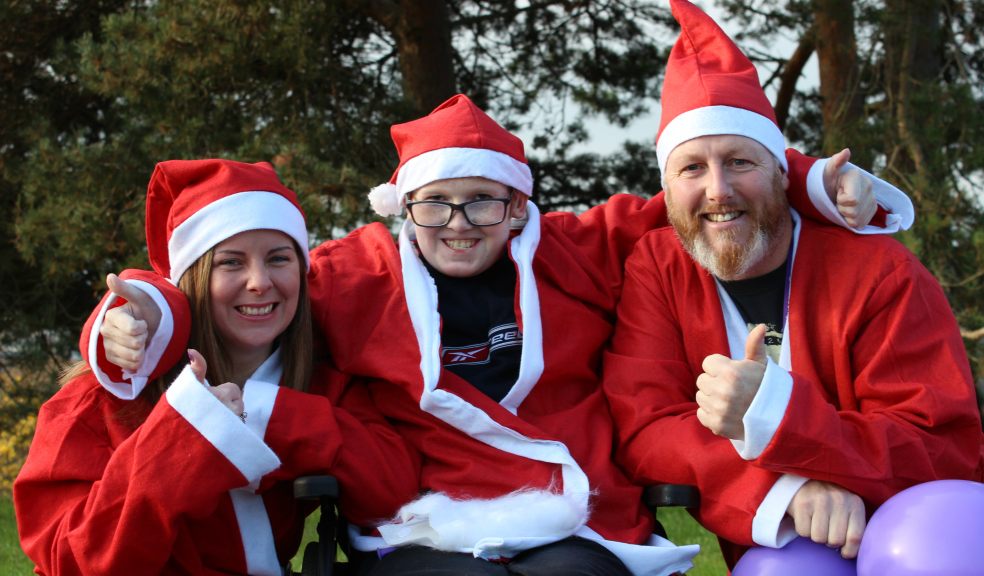 Staff and students from Exeter Deaf Academy will be among the sea of Santa’s running along Exeter Quay this Sunday.

The event is organised by Exeter City Football Club’s Football in the Community, with Exeter Deaf Academy being one of their chosen charities.

Exeter Deaf Academy educates and cares for students aged 4-24, but it is not funded in the same way as state schools and so relies on fundraising for essential projects that otherwise would not happen.

Like many inspirational students at the Academy, Sam pictured here, who also enjoys horse-riding, doesn’t let his deafness or wheelchair hold him back and has entered the Santa Run as a fundraiser to help raise the profile of the charity’s work.

Care Team staff Rebecca and Tony will be guiding Sam around the Santa Run course, together with a number of Exeter Deaf Academy’s students and staff.

They will be raising money for a number of projects that include family sign language weekends, and counselling and therapies for students who have additional needs beyond their Deafness.

You can sponsor the Exeter Deaf Academy team by visiting: https://mydonate.bt.com/events/exetersantarun/382671

The annual Santa Run on Sunday 4 December attracts hundreds of Santa’s of all ages and is one of the city’s festive highlights. It is a wheelchair-friendly inclusive event starting from Piazza Terracina on Exeter Quay.

There will be volunteers with Exeter Deaf Academy charity tins at the Santa Run if you would like to make a donation on the day.

Exeter Deaf Academy is one of the city’s oldest charities and runs a specialist school and college in a bilingual English and British Sign Language (BSL) environment for Deaf young people aged 4-24.

The Deaf Academy’s English and BSL bilingual community gives Deaf young people a sense of belonging as they learn and develop their own language skills and journey towards independence and fulfilling their own potential.