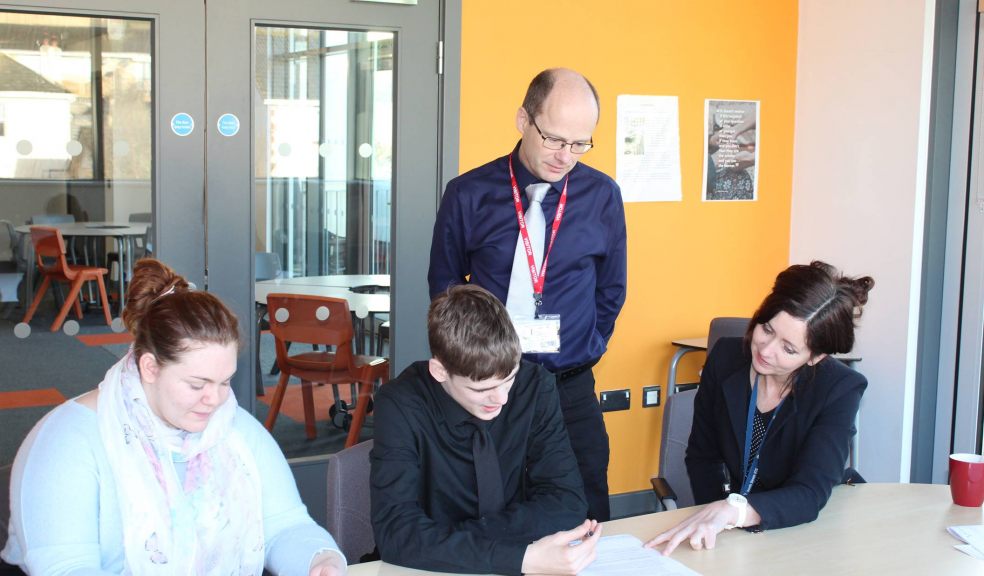 Newton Abbot’s pioneering secondary school for young people with a flair for science and engineering marked National Apprenticeship Week by hosting a special Work Ready Day for its young Scientists and Engineers.

South Devon University Technical College (UTC) backed the ‘Look Beyond’ campaign to inspire and excite the next generation to look beyond traditional routes of employment. The college partnered with leading South West employers to encourage students to consider different ways into the world of work, including apprenticeships.

Students at the Kingsteignton Road college met current apprentices who are working for a range of local employers including the Environment Agency, Wales and West Utilities and South West Water. The young scientists and engineers also had the opportunity to meet potential apprentice employers in a series of workshops, designed to help students make the right choice when it comes to choosing an option post college.

These workshops included an interview skills session led by marine technology company Valeport and a leadership skills workshop led by the Royal Navy.

Every year, National Apprenticeship Week highlights the fantastic benefits of apprenticeships to employers, individuals, local communities and the economy. This year’s theme, ‘Look Beyond’, aimed to encourage students to look beyond traditional routes into employment, called for employers to look beyond traditional hiring routes and asked for parents and teachers to understand the true value that apprenticeships bring and relaying this to young people.

Claire Plumb, Principal at South Devon UTC, commented: “Over 50% of post-16 leavers from South Devon go on to start apprenticeships with the remaining planning to study at University or join the military. We loved the ‘Look Beyond’ theme this year. There are so many misconceptions about apprenticeships with many young people being led to believe that University is the only path you can take if you want to be successful in your career. The awareness week gives us a great opportunity to disprove this belief, highlighting just how valuable apprenticeships are to our students and potential employers.”

Towards the end of the day, students heard from South Devon UTC alumni who have gone on to apprenticeships and University.

Jemima, 19, commented: “I can’t believe that I’m an Electrical and Instrumentation Apprentice at Wales and West Utilities. It’s so surreal! I have always been interested in electrical engineering ever since I was a kid. Me and my Dad used to work on cars together and this really piqued my interest in wanting to fix things. Currently studying one day a week alongside my apprenticeship, I aspire to be a Senior Network Technician and possibly a Manager.”

Harry Durant is now on a Degree Level Apprenticeship with Cyclerval UK, part of Dalkiawastenergy, after leaving South Devon UTC in 2019. Rod Jakeman, Plant Manager at Cyclerval, recalls how Harry really stood out from the crowd.

Rod commented: “When Harry came in for his interview, he was prompt, dressed smartly and had obviously looked into the company which demonstrated that he was serious about joining us as an apprentice. Having previously attended South Devon UTC, this showed me a desire for engineering. Shortlisted out of 50 candidates to just four applicants, Harry produced a presentation for his second interview. No one else did. Harry has fitted in just fine here. He continues to show commitment and is doing well.”

South Devon UTC works with some of the region’s leading employers to design a curriculum for 14-19-year-olds which will equip students with the skills and experience needed to progress in their chosen careers. These employer partners also provide Challenge Projects, work experience and apprenticeship opportunities. Both South West Water and MB Aerospace, an international group providing complex engineering solutions to the Aerospace and Defence market, are facilitating access to apprenticeships to South Devon UTC students every year.

The college is currently recruiting students for the 2020/21 academic year. Young people with a flair for science and engineering due to start Year 10 and Year 12 in September 2020 should contact the college for more information. Call 01626 240201 or visit http://southdevonutc.org/