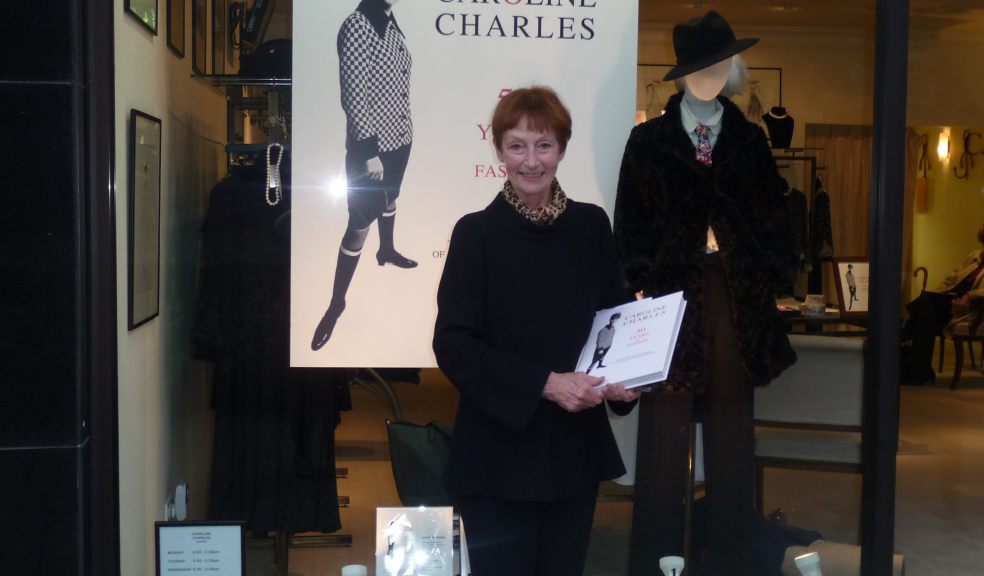 Caroline Charles, one of London's most respected womenswear designers, was visiting her Exeter store today (20th November) to meet a select group of her customers and to celebrate the launch of her new book 'Caroline Charles - 50 Years in Fashion'.

Having developed her business over the past five decades, the Caroline Charles label is now sold and marketed throughout the world to a loyal fan base.

Caroline explained how she began in the world of fashion art school followed by a couture apprenticeship and a stint as a photographer's assistant; she then worked for Mary Quant and was inspired by couturiers as well as being a leading designer in the '60s youthquake and swinging London.

Caroline's first collections were kooky and fresh and included a white cotton dress made from a bedspread! She was one of the original designers to join what was later to become British Fashion Week and subsequently opened a shop in Beverly Hills in the '70s, and in the '90s had many successes with shops and shows in Japan.

Her clothes were quickly snapped up by celebrities, which over the years have ranged from Lulu, Marianne Faithful and Cilla Black as well as special suits being made for Mick Jagger and Ringo Star. Princess Diana became a regular client as did Emma Thompson, who wore a Caroline Charles design to receive an Oscar.

Caroline Charles has been invited over the years to be a design consultant to major brands such as Burberry and Marks and Spencer as well as having design collaborations with major accessories and textile companies. Today she told customers at the Exeter store how here Mother used to go into Marks and Spencer and rearrange the clothes so hers were at the forefront, which she believed played a large part in her success.

Caroline also talked today about how she had designed the official scarf to mark the 40th anniversary of the accession of the Queen, and how her Mother, a keen Royalist, would have been proud.

Caroline Charles - 50 Years in Fashion takes you on a personal journey through her rich history, starting with press cuttings which capture the magic of the 60s and 70s. As we move through the decades colour gradually creeps in and you get a sense of the power of the Caroline Charles brand taking a grip on the world.

When asked about the Exeter store she told The Exeter Daily, "Exeter is a beautiful, vibrant city. We were already in Torquay and were looking for another base in the South West just over five years ago. The new Princesshay shopping centre was being built and they kept asking us to come on board. We couldn't find the perfect historic building and so eventually we said yes.

"We are so happy here. The shop is light and spacious and we have the benefit of seeing the ancient side of Exeter in the wall outside."

So what next for Caroline Charles? As with so many other businesses, China is the answer. "Bejing is a whole new world. It is a secret, extraordinary place and there is great demand for heritage brands, which Caroline Charles has grown into."

It was clear from the clientele at the Exeter store today that a Caroline Charles customer is a very descerning one, someone who is willing to invest in clothes that will last a lifetime and deserve to be put on show for their beauty. The beading work alone in some of the pieces demands to be put on display.

Caroline emanates cool, calm sophistication and posseses modesty that belies her international renown as one of the worlds finest names in fashion.