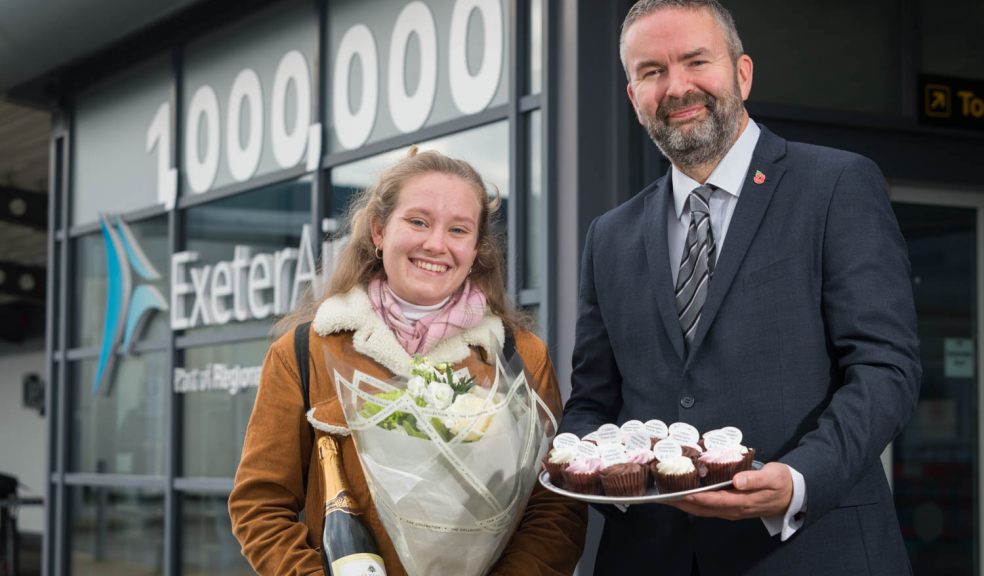 Exeter University student Lily Harris had an unexpected surprise when she was chosen by Exeter Airport to help celebrate its one millionth passenger milestone.

Lily, 20, had just flown in from Paris with Flybe when she was met by airport managing Director Matt Roach and presented with a bottle of champagne and flowers as a thank you for helping Exeter Airport to reach one million passengers in the last 12 months.

The airport has seen year-on-year growth after being acquired by Rigby Group plc in 2013 when passenger numbers were 738,000. Since then £10m has been invested in airport facilities, including a £1 million terminal expansion completed this summer.

Lily, who is a third year modern languages student currently doing a six-month placement in Paris, said: “I was not expecting this today, that’s for sure! It’s a bit of a shock to be the millionth passenger going through but it’s quite a nice surprise. I’m using the airport every other month currently and have just flown back to visit friends. I love it – airport security is so quick compared to others – you can fly through. And everyone here is so friendly.”

Matt Roach, Managing Director at Exeter Airport, said: “Passing the one million passenger milestone is a tremendous achievement for Exeter Airport and we’re very grateful to Lily for helping us celebrate.

“We want to be the airport of choice for the South West and we do that by offering a wide range of desirable destinations and high frequency hub connections, with an unrivalled passenger experience thanks to great customer service and continued investment in airport facilities.”

Passengers arriving at the airport and staff were treated to cupcakes as part the one million celebrations this week.

Matt said passenger numbers in July and August were up 15% year-on-year, buoyed by new Ryanair routes to Spain, Italy and Malta. This strong growth contributed to a 10% increase in passenger numbers overall to just over one million in the last 12 months.

Ryanair added a new year-round service from Exeter to Alicante in October, and TUI has more seats than ever before to sunshine destinations next year, complementing Flybe’s long-established domestic and international route network from Exeter Airport, where the airline is based.

Next year Flybe will rebrand as Virgin Connect, bringing a world-renowned brand to the South West and cementing Exeter’s importance as a strategic gateway for the region.

Exeter Airport has a turnover of almost £24m and employs 300 people at peak season. It serves over 35 domestic and European destinations, including major international hubs such as Amsterdam, Paris and Manchester, and has just published its Fly Exeter 2020 preview guide.

In October Exeter Airport was ranked as having the second fastest security channel of any UK small airport, taking just 5.9 minutes, and in September was ranked fourth among 17 UK airports for customer satisfaction. Both surveys were by consumer group Which?

RCA also owns and operates a growing network of XLR Executive Jet Centres which includes Exeter, Birmingham, Liverpool and most recently Bournemouth, which opened in August this year.

Exeter Airport’s continued growth has seen a £1m investment this year in a new domestic arrivals area and new baggage belt facilities. International arrivals has also been upgraded, and there is a brand new departure gate to increase boarding capacity.