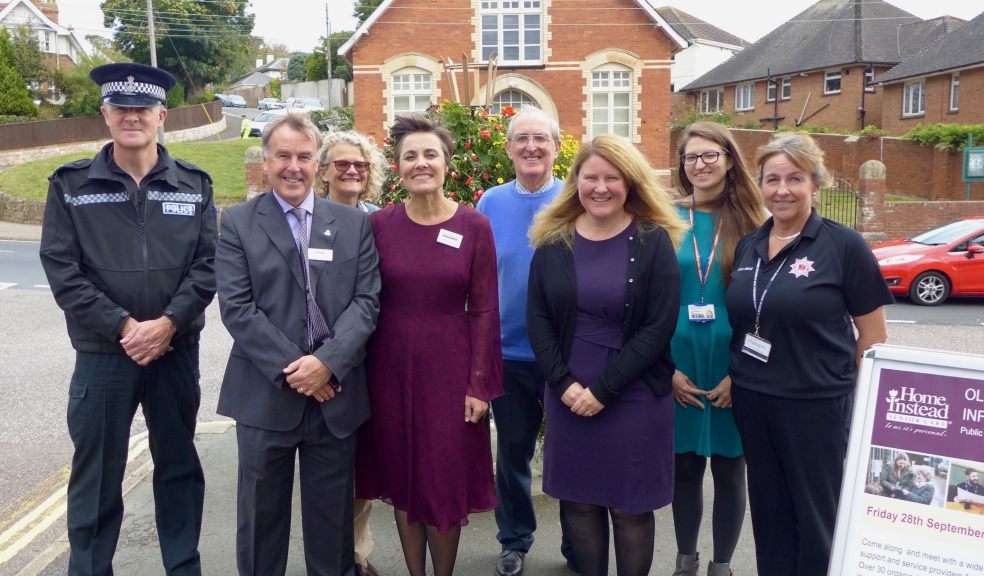 Multi-award-winning Home Instead Senior Care® Exeter and East Devon announces its fifth ‘Older Person’s Information Day’, held at Budleigh Salterton Public Hall, is a resounding success.   The popular annual free event has grown year on year, with 2018 being more diverse than ever focusing on health, well-being, community and safety celebrating World Alzheimer’s month, and The United Nations designated 1st October as International Older Person’s Day.  With over 250 visitors attending throughout the day, arrangements are already in place for a 2019 event with expansion plans of hosting at other towns in the Exeter and East Devon area to give a greater reach.

This year’s event attracted over 35 exhibitors from national and local service organisations, including The Alzheimer’s Society, Dementia UK and Hospiscare.

Home Instead has been at the forefront of specialised home care and supporting those being cared for and their families for many years.  The event is completely free for all and has proved popular over the years with older people coming with friends and family to meet a diverse mix of quality and reputable companies and organisations.

Mark McGlade, Managing Director of Home Instead Senior Care® Exeter and East Devon said: “This year’s event was even bigger and better than ever and there was a real buzz in the room.  Feedback from both visitors, exhibitors and presenters alike has been very positive and we have received some lovely comments which further confirms the need for this type of local event.  Our aim is to bring together leading quality health, care, legal, financial and support services from across the region to host tables and showcase their services, offer support and signposting for the public.  It’s also a great way of encouraging community engagement in East Devon and across the county – there’s no age limit, and everyone is always welcome.” He adds: “The relaxed and social environment means they can learn more about what people do whilst chatting over a cup of tea. Often older people don’t think about the support they may need in the future or the best place to find it until it becomes a crisis.”

The day did not limit itself to provide advice solely on the physical wellbeing of older persons; it also incorporated organisations such as Devon NHS Partnership Trust – Depression and Anxiety Service (DAS), offering support with mental health wellbeing – a major area that affects people of all ages.

For the first time, The Devon and Cornwall Police Crime and Safety Roadshow were involved with ‘The Older Person’s Information Day’ offering a wealth of information and advice including:  internet safety and scam awareness; fire safety; crime prevention, property marking and Trading Standards, and drug awareness. Devon & Cornwall Police spokesman, Sgt. Andy Squires said: “Thank you Home Instead for inviting us to join you in your Budleigh ‘Older Persons Information Day’. It was a fantastic day and we got to speak to many people throughout the event.”

This year also saw the launch of a new series of talks and presentations with Q&A sessions scheduled throughout the day at The Church on the Green, located directly opposite the Public Hall.  The talk on the Budleigh Salterton Hospital Community Hub was very well received as was Exeter University’s Research team, who have partnered with Home Instead Senior Care® Exeter and East Devon to take Cognitive Rehabilitation Therapy to the local community, who delivered an enlightening presentation on their ground-breaking research into Alzheimer’s and dementia.

Home Instead Senior Care is the only care provider in the UK with City & Guilds accreditation for their Dementia Training and they recognise, and promote, the importance of seeking help and guidance for older persons who may be suffering from dementia, or other illnesses.  This accreditation was awarded by C&G because of the research and evidence-based learning that Home Instead applies to its own training courses.

Mark McGlade is the Chairman of the East Devon Coastal Towns Dementia Action Alliance, and a Dementia Champion with the Alzheimer’s Society.  He said: “It’s a privilege to support people living with dementia to live life their way and to help them achieve their own goals. As the UK’s leading quality care provider in supporting older people to maintain independence in their own homes, Cognitive Rehabilitation is a perfect fit for Home Instead to take into the local community.  It means we can support more people with dementia to live well in their own homes, helping them to regain confidence and improve their ability to perform the daily tasks that matter most to them as individuals, and means they may be able to stay in their own homes for longer.”