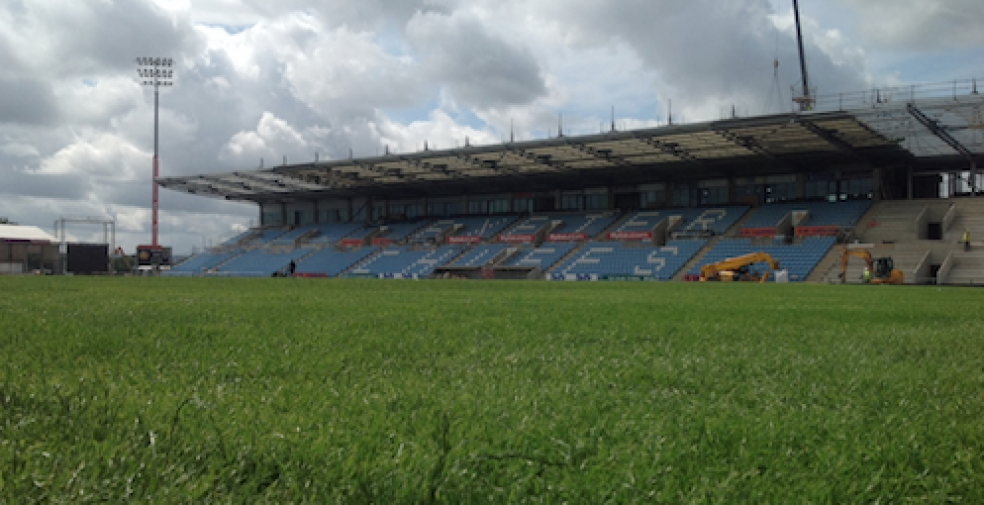 This is the view Exeter Chiefs players will get of their new grandstand when they run out for their first game at Sandy Park against Leicester Chiefs on September  13.

Work has been continuing apace throughout the summer forcing the team to play all of their friendlies away from home.

But as our pictures show, everything is now falling into place.

The main part of the works have seen the West Grandstand undergo a £7.5 million transformation, doubling its capacity for usage on both match-days and events throughout the course of the week.

Meanwhile, £1m has been spent on a state-of-the art artificially reinforced Desso pitch.

And the multi-million pound redevelopment has clearly proved a hit with supporters as not only have many of them renewed existing seasons tickets, but a large number have also taken up the option of taking their place in the newly-extended West Grandstand and expanded East Terrace.

Commenting on the news, chief executive Tony Rowe said: "Each year we continue to see our support base grow with the rise in season ticket sales. The support that we enjoyed last season, particularly during our European and LV= Cup adventures was simply outstanding. For us, it's fantastic to see so many supporters getting behind the team already, by purchasing their season ticket memberships and guaranteeing their place at Sandy Park.

"As a club we appreciate the tremendous growth in support behind the team and we'd like to thank those supporters for investing in the Chiefs as it enables us to go from strength to strength on and off the pitch."

The Chiefs kick-off their Aviva Premiership campaign on Sunday, September 7 away to newly-promoted London Welsh.

As well as the major redevelopment works on the stadium itself, a Desso GrassMaster hybrid grass pitch has been installed at a cost of almost £1m. The new playing surface is a 100% natural sport grass pitch that has been reinforced by millions of Desso artificial turf fibres.

With Sandy Park having already picked up numerous awards in the past for it's match-day experience, Rowe believes the new and improved facilities on offer will merely add to the experience for all rugby visitors.

"By having a season ticket with the Chiefs, not only does it guarantee a supporter entry into 11 Premiership fixtures, but also a further three European and two LV= Cup games," added Rowe. "There are also one or two benefits that a season ticket brings for supporters, so it really is the best way to go about watch the Chiefs."

Season Tickets, which are priced from as little as £330 for adults; £200 for students and £165 for children under-16, are still available for all areas of the ground.

For those supporters who have already signed up to become a Season Ticket holder, we aim to have your new season cards available shortly. Currently we are working closely with our ticketing partners Green 4 to overcome a few technical issues before they are finally issued.