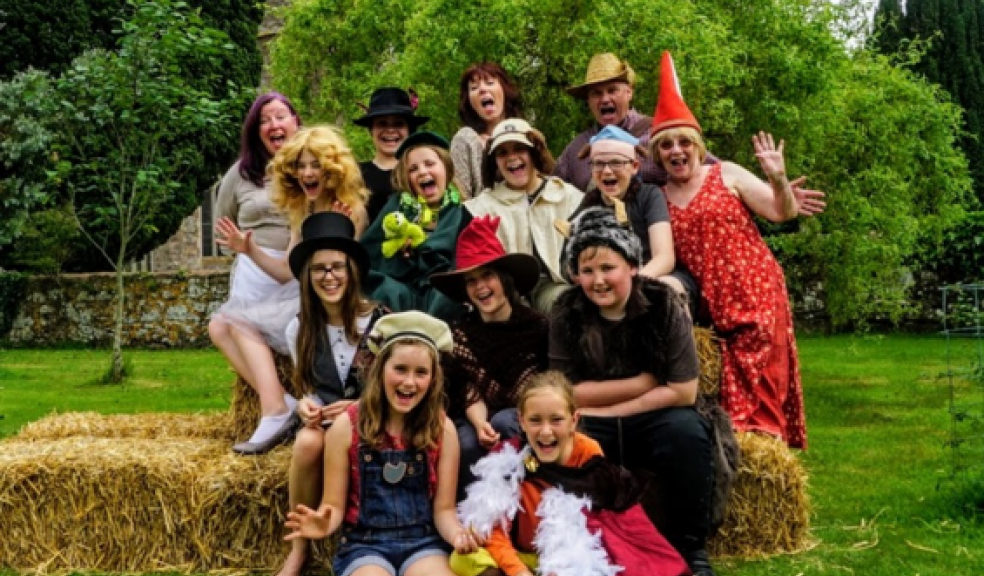 Your essential guide to What’s On in and around Exeter this weekend (6-8 July).

Grimm Tales in The Garden
Friday & Saturday, Bycott Gardens, School Road, Silverton
Silverton’s summer bliss is set to be shattered as dark fairy tales take centre stage in the Mid Devon village. Strange creatures, characters and much-loved names from the brothers Grimm will star in a series of stories performed outside by The Silverton Luvvies old and young.  Using the backdrop of the village’s medieval church and performed in a magical garden, the 200-year-old German fairy tales will come alive for two nights this July as the players tackle a number of the well, and less well, known stories. Gates open from 7.30pm for 8pm show start. Tickets: £5 adults, £3 children – available on the gate only.  There will be a bar available during the performances, which will be followed by a disco.

The Snail and the Whale
Saturday & Sunday, Exeter Northcott
Join a tiny snail on her trip round the world in Tall Stories’ magical, musical production inspired by the fantastic bestselling picture book by Julia Donaldson and Axel Scheffler. Longing to see the world, a tiny snail hitches a lift on the tail of a humpback whale. Together they go on an amazing adventure – but when the whale gets beached, how will the snail save him? Follow the tiny snail’s exciting journey, as seen through the eyes of an adventurous young girl and her seafaring father… Storytelling, live music and lots of laughs for everyone aged 4 and up.  Performances on Saturday at 2pm and 4pm, Sunday 11am & 2pm. https://exeternorthcott.co.uk/

The Isle of Slaves
Friday & Saturday, Cygnet Theatre, Exeter
Join the Cygnet Company this summer for a classic role-reversal comedy by the great C18th dramatist Pierre Marivaux. Marooned on a mysterious island run by former slaves two put-upon  servants switch places with their masters and discover the pleasures - and dangers - of wielding authority over another human being.  https://cygnettheatre.co.uk

Croydon Male Voice Choir
Friday, South Street Baptist Church, Exeter
Croydon Male Voice Choir, singing under the baton of Musical Director Richard Hoyle, will be over 50 members strong and will sing an eclectic selection from the wide repertoire of music for which the choir is noted.  The concert will also feature the soloist Darren Wilkins whose fine flute playing will add an extra dimension to the evening’s enjoyment. Tickets £7 on the door.  Croydon Male Voice Choir will also perform a lunchtime recital in Exeter Cathedral from 12 noon on Saturday 7 July.

ARRIVAL – The Hits of Abba
Saturday, Exmouth Pavilion
Over four decades after Swedish pop legends ABBA swept to stardom, their music remains as popular as ever and the magic of the era is being brought to stages across the country courtesy of ARRIVAL – the international, multi award-winning show that has sold out in over 20 different countries worldwide since 1995.  www.ledleisure.co.uk/exmouth-pavilion

Raymond Froggatt in Concert
Sunday, Exmouth Pavilion
One of Britain's most prolific roots singer-songwriters, affectionately known as 'Froggie'. His concerts are sold out across the country and abroad, his followers arrive at the shows clutching their frogs with green scarves waving, certainly a sight to behold. Froggie writes and sings his own songs mesmerising his audience, making them laugh with one of his many stories or cry with emotion with a song that touches the heart like no other. An evening with Raymond Froggatt is pure magic, an evening not to be missed! www.ledleisure.co.uk/exmouth-pavilion

Cantilena Songs from the Shows
Sunday, Poltimore House, Exeter
Join Cantilena for a summer’s afternoon of light music.  The programme will feature songs from a wide range of popular shows, from the operettas of Gilbert and Sullivan and the classical jazz hits of Irving Berlin, through to medleys from Oliver, West Side Story and Les Miserables.   Tickets £8 (children free) including tea and cakes.

Real Ale and Cider Festival
Friday, 6.30pm, Wigwam Bar, Sandy Park, Exeter
The annual festival, in partnership with Otter Brewery and Heineken, returns. The Wigwam Bar, behind the stadium's south stand, provides the perfect backdrop for a summers evening of sampling the some of the South West's finest tipples and dancing to fun acoustic band Not the Cowboys- 'the second best boy band in Devon behind the Wurzels.' Tickets £8 which includes a commemorative cup and three half pints of your choice. Doors open at 6.30. Buy your tickets here.

Paulos Circus
Until Sunday, Darts Farm, Topsham, Exeter
All new acts for 2018. From breath taking stunts, laugh out loud comedy to beautiful artistry, the Paulos family have created a show to give you and your family ever lasting memories. The UK's first, original all seat £7pp family friendly affordable circus in a heated big top. Box Office open on site daily from 11am (cash only). www.paulos.co.uk

Mitsubishi Motors Exeter 7s
Saturday & Sunday, Sandy Park, Exeter
Exeter welcomes back the Mitsubishi Motors Exeter 7s to Sandy Park for the fourth year in a row. Part of Rugby Europe’s Grand Prix Sevens Series, the hugely popular event at Sandy Park – staged over the weekend of July 7 & 8 – is set to be even bigger and better with a wealth of rugby and entertainment on offer for spectators. Tickets start from £10 and can be purchased by clicking here.

Braded: Fashion, Femininity and the Right to Vote
Killerton House, Broadclyst
To mark 100 years since some women got the right to vote, this exhibition reflects the timeline of the campaign for women’s suffrage from 1866 until 1928 through the changing styles of fashion. The exhibition highlights the relationship between politics and dress and how this was exploited by the campaigners and supporters of women’s suffrage. Groups involved in the campaign used design and colour to identify themselves and to raise awareness and support for their cause. The exhibition runs until 4 November and entry is free, but normal admission charges apply for the venue. https://www.nationaltrust.org.uk/killerton