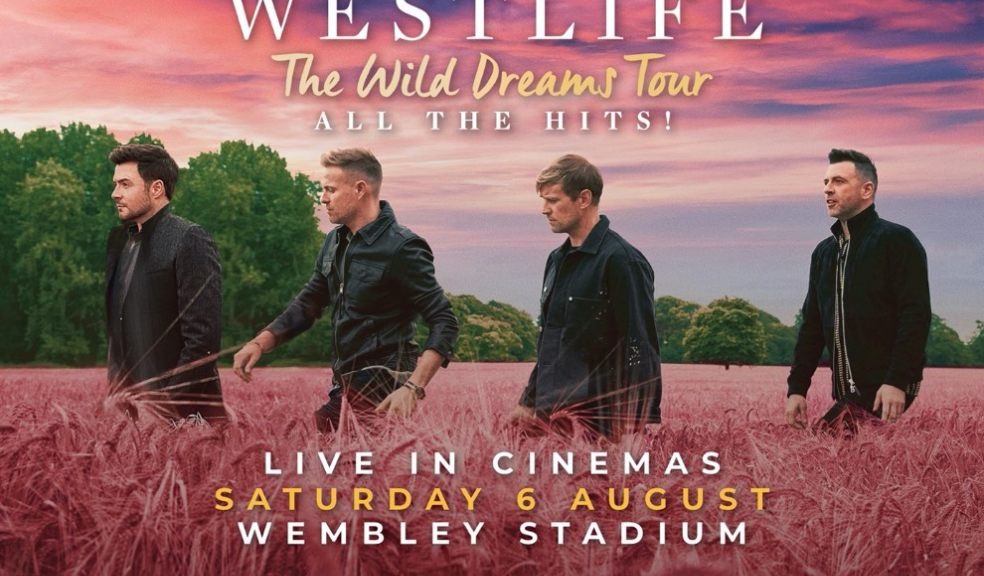 Pop icons Westlife have announced a huge cinema spectacular for Summer 2022, with their massive sold-out concert at the iconic Wembley Stadium in London being broadcast live via satellite into cinemas across the UK on Saturday 6th August.

The UK’s biggest-selling album group of the 21st century, Westlife will perform at the legendary stadium for the very first time in front of a sold out audience.

Promising to be an unforgettable night for fans, the band will perform their hits from their highly anticipated Wild Dreams tour, including Uptown Girl, Flying Without Wings, You Raise Me Up, and If I Let You Go.

Irish heart-throbs Shane, Nicky, Mark and Kian invite fans everywhere to come together in their local cinema and share in this unforgettable live experience, up close and personal.

Ahead of the event, Westlife said: “Without a doubt, Wembley stadium will be a career high and a real ‘pinch yourself’ moment in our lives.

"After a two year wait, August 6th will be the biggest show we have ever undertaken in the UK and all under the arch of one of the world’s most iconic venues.

"To now announce that the show will be screened live in cinemas right across the UK, Ireland and Europe, allowing our fans who won’t be there on the night to enjoy it in real time too is something really special for us.

"We will be giving Wembley everything we’ve got on the night with all of our Greatest Hits included!

"It really is going to be incredible. Don’t miss this! Love Kian, Mark, Nicky and Shane.”

Presented by CinemaLive, leading producers and distributors of event cinema, Westlife – Live From Wembley Stadium will be broadcast direct via satellite into over 500 cinemas in the UK.

Since the bands formation more than 20 years ago, Westlife have sold over 55 million records worldwide and are the only band to have their first 7 singles enter the UK chart at No.1. They also have the most singles of any artist to debut at No.1 in the UK. Overall, the band have had an incredible 14 No.1 singles, behind only Elvis Presley and The Beatles. They have had 33 No.1 albums worldwide and as a live act have sold 5 million concert tickets worldwide.

Westlife – Live From Wembley Stadium, distributed by CinemaLive, will be broadcast at 8:30pm on Saturday 6th August 2022. There will be encore screenings at 3pm in cinemas on Sunday 7thAugust.

Tickets are on sale from Wednesday 15th June. For more information and to find cinema locations visit westlifeincinemas.com