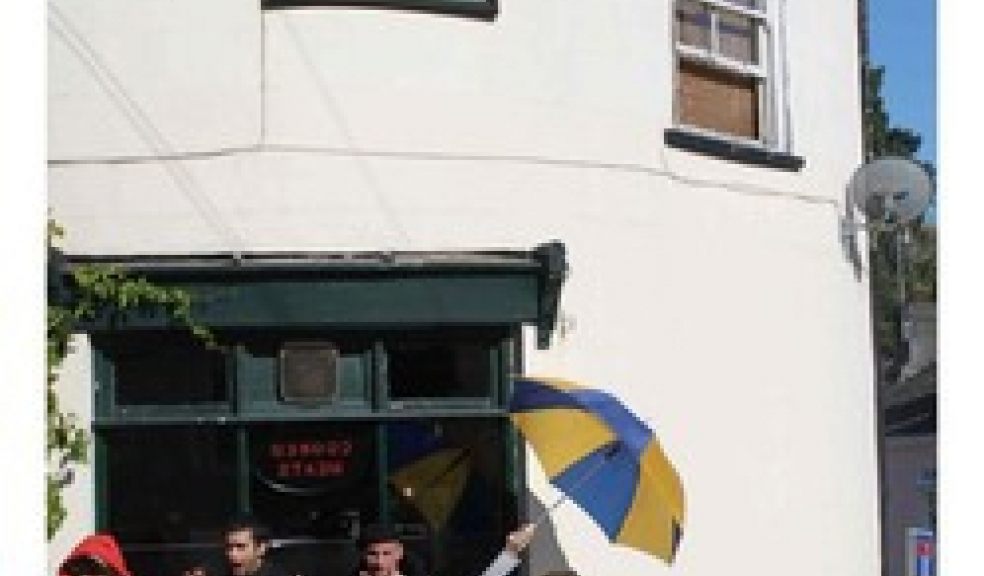 The city of Edinburgh may be in the midst of holding their annual Fringe Festival, but not to be outdone, Exeter were able to offer its own mini-fringe to local residents in the form of four boys performing their one-man shows in the Hourglass pub over six evenings last week. The title ‘Here Come The Boys’ may suggest that the participants would be removing their clothes, but I can report that no baring of flesh occurred. Sorry Ladies. However, the audience were instead treated to an interesting and eclectic evening of performances.

On the final day of their run at the Hourglass, the first performer of the evening was Michael Woodman, with his show entitled ‘Wild’.  Emerging from a colourful make-shift tent, there was an assumption in the audience that he would begin to speak but instead it was the audience who were the voice for his production, as brown envelopes were passed around which contained a section for you to read about certain personal aspects of his life such as having his first pint.

Each element of the story smoothly transitioned to the next and Michael was able to keep up with the readers by acting out the content spoken, which ensured that you remained fixed on his performance rather than looking at the person who was reading. He used the props he had effectively and they added to the piece rather than being a distraction.

The concept of audience participation worked well, with each audience member happy to read aloud and it felt that as a whole we were all part of Michael’s personal journey as to how he had landed in the wilderness of Dartmoor.

The next act to perform was Dean Elliott with his show ‘Blank.’  As with Woodman’s show, no words were spoken and audience participation was incorporated from the start by encouraging us to applaud his entrance to the performance space.

The range of facial expressions that Dean delivered ensured that you were engaged with the character at all times as we were led through the motions of  the character choosing a suitable pen, to finding the right pair of glasses. It left me not only smiling and laughing at the idiosyncrasies of the character but also questioning as to what it was the character was hoping to achieve. Despite feeling moments of frustration when you just wanted the character to put pen to paper, this feeling quickly turned to humour showing a balance between being excruciating and funny, which led to a well crafted performance.

With similarities to Mr Bean and some elements reminiscent of Kenny Everett’s ‘Morris Mimer’, Dean was able to move away from the stereotypical view of mime, where we expect to see a man in a striped shirt and white make-up, and instead he created a unique and enjoyable performance.

The final act of the evening was Jack Dean with ‘Rain’ where he covered the topics of depression and weather, by combining elements of spoken word, hip hop and humour. On a Saturday night, discussing the topic of depression may not be quite what you expected but in the show he had the audience singing along to the likes of ‘Don’t Worry Be Happy’ by Bobby McFerrin and the audience felt at ease as we followed him on his journey through the sadness and cloudy skies.

There was a confidence that radiated from Jack that made him a likable performer and in turn made you listen to what he had to say. His ability to switch between talking as himself and to figures in the story such as his therapist were perceptive and humorous.

‘Rain’ was innovative and thought-provoking and I look forward to seeing any future performances by Jack.

A mention should also go to the performer Joe Sellman-Leava who had been performing at each night except the final evening, so I was not able to see the performance first hand. Although from the high standard I had seen that evening, I am sure his performances during the week were just as entertaining as the rest of the boys.

It was encouraging to see such talent and enthusiasm for the art of performance in the confines of the Hourglass pub that evening, and I would recommend that Exeter residents explore the current burgeoning theatre scene this city has to offer.

To find out more about these performers and the event organiser’s (Chloe Whipple) future projects you can contact them directly on Twitter: