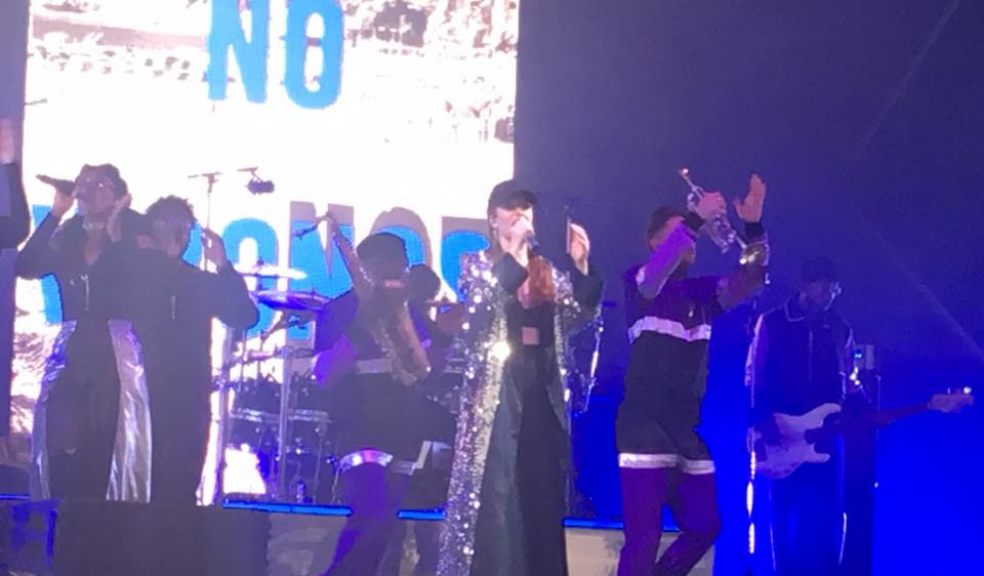 The warm weather returned to the West Country over the weekend (Saturday 1st July) to celebrate 150 years of Wincanton Racecourse and to welcome Jess Glynne to the stage.

Triple platinum artist Jess, who didn’t get her South West fix at this year’s Glastonbury festival, treated the crowds that had travelled from across the country to some of her famous hits including ‘Take me home’ and ‘Hold my hand’.

Proving she has just as much sass as the likes of Beyoncé, Jess rocked the stage wearing black flares, a sparkly floor length silver jacket and gold hooped earrings emblazoned with the word ‘me’. The 27-year-old red head made further reference to mum of three Beyoncé during her set, belting out her own version of the singer’s hit ‘Déjà vu’.

Despite experiencing worldwide success since topping the charts with ‘Rather Be’ in 2014, Jess showed she’s not let the fame get to her head, informing the crowd that hit single ‘My Love’ was written about her mum and dad.

Whilst music lovers that attended the open aired performance were treated to what can only be described as a spectacular show, with fireworks and confetti stuffed beach balls galore, Jess was mindful of recent events that have shaken the UK.

“Do you feel safe?” Jess asked of the crowd. Following a resounding ‘yes!!’ the songstress performed ‘Real Love’ which she said was a song for ‘whoever makes you feel safe’.

Although there is no denying Jess was the star of Saturday night’s show, with audiences repeatedly requesting ‘just one more song’, the London born artist still managed to find the time during her performance to thank her amazing band and backing singers, who brought just as much sass to the West Country with their talent and extravagant outfits.

Tracey Scrivens, who travelled from Exeter to attend, said: “Some artists just ‘put on a show’ but this was so much more than that. Jess’s voice was amazing.”

It can’t be forgotten that Jess was not the only amazing artist to grace the stage at Wincanton Racecourse on Saturday. Indie artist Mullally performed hits ‘Troubled Love’ and ‘Overdose’, whilst cheeky chappy Kiko Bun also got the crowd moving with his set, featuring songs ‘Sticky Situation’ and ‘Shy man’.

The outdoor summer show really did have something for all the family. If Jess Glynne wasn’t your cup of tea DJ Sara Cox made sure she had something for you, playing anthems such as ‘Return of the mack’ and ‘Don’t you want me’.

The BBC Radio 2 Presenter also made an unusual star in the form of cameraman ‘Paul’ introducing him to the crowd with a chorus of applause.

If you were gutted to have missed out on Jess’s fabulous Somerset set,which included a firework finale, then fear not. The artist will be keeping herself busy over the upcoming months, performing across the UK in locations such as Henley-on-Thames, Carlisle and London.

For more information on Jess Glynne and her future performances, visit: http://jessglynne.co.uk/