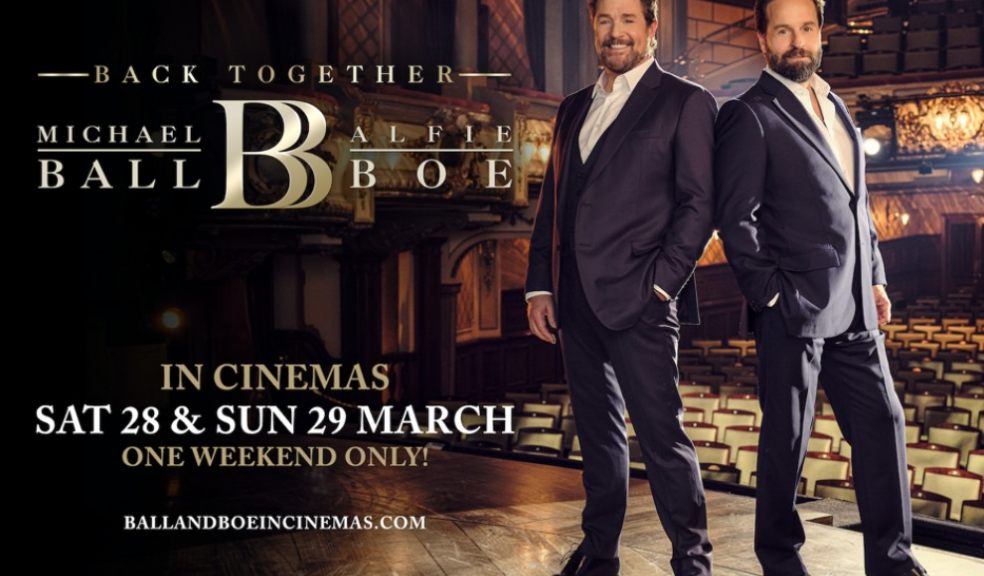 The ultimate musical duo, Michael Ball and Alfie Boe, are ‘Back Together’ and set to delight cinema audiences up and down the country with the final show of their UK tour from London’s O2 Arena.

Presented by CinemaLive, leading producers and distributors of event cinema, Michael Ball & Alfie Boe: Back Together, will be shown in over 1,000 screens in cinemas across the UK and Ireland, including major multiplexes and many independent cinemas and arts centres for one weekend only on 28th & 29th March 2020.

The show will see the superstar duo take on their favourite musical theatre, pop and rock tracks, including songs from The Lion King, The Greatest Showman and The Phantom of the Opera, as well as a beautifully arranged Queen Medley. Showcasing their phenomenal voices and undeniable on-stage chemistry, Ball and Boe’s irresistible charm will undoubtedly light up the big screen.

As a cinema exclusive, audiences will be treated to candid behind the scenes footage and interviews with the duo.

Alfie Boe added, “What better way to end our 'Back Together' live tour than performing at the O2 Arena in London and filming it to go out in cinemas – over 1000 screens across the country. No pressure for us then! So whether you saw us live, or not, we promise to entertain you and have a lot of fun doing so! Spread the word, treat the family to some popcorn and come and join us. It's just after Mother’s Day too… so there’s your gift sorted! Hope to see you all there! Alfie xx "

Ball and Boe’s debut album Together became the UK’s best-selling album of 2016 and beat the likes of Little Mix and Rolling Stones to the Christmas No.1 spot. The follow up Together Again brought the pair a second No.1 album in 2017, and in 2019 they released their third record Back Together to great critical acclaim, scoring them yet another top 5 chart position.

Meeting over a decade ago in a production of Kismet at the London Coliseum, the pair struck up an instantaneous friendship, going on to become chart superstars. As a duo, Ball and Boe have now sold over 1 million albums in the UK, received 2 Classic Brit Awards, and sold out two headline arena tours.

As solo artists, the pair have both received countless prestigious awards, achieved record breaking sales and chart successes. With a career spanning over 30 years, Michael is a multi-platinum recording artist, having two Olivier awards under his belt and becoming a popular radio and TV presenter. His incredible live performances have smashed box office records.

Alfie’s outstanding voice has made him Britain’s most popular and biggest selling tenor. Having performed on the world’s greatest opera stages and arenas, he has also won a Tony Award, led the cast of Les Misérables and performed for the queen at her 90th birthday celebrations at Windsor Castle.

Michael Ball and Alfie Boe: Back Together, distributed by CinemaLive, will be screened on 28th & 29th March 2020

Tickets are on sale now. For more information and to find cinema locations, visit ballandboeincinemas.com