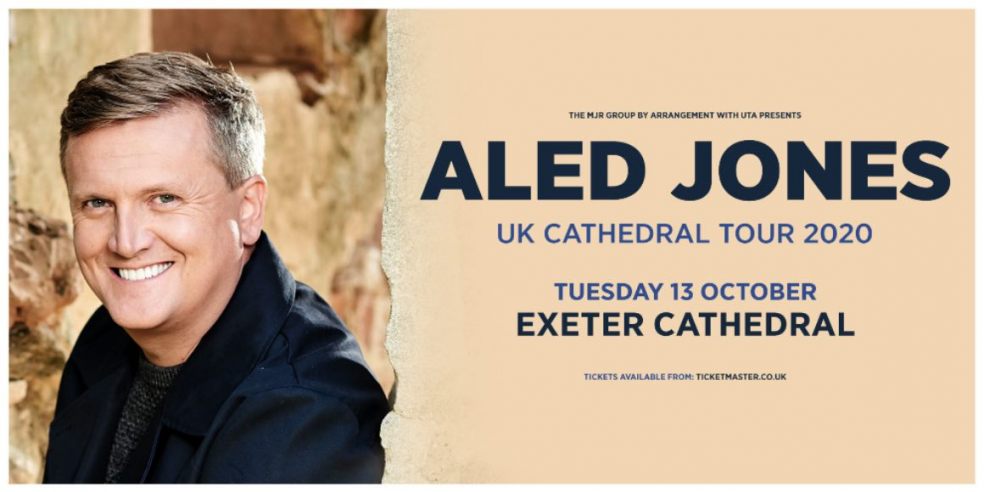 Forty years since Aled was a choirboy at Bangor Cathedral, he brings his special concert of music and stories to cathedrals throughout the UK.

He will be performing at Exeter Cathedral on 13th of October 2020.

As one of the classical world’s vocal powerhouses, Aled Jones has received countless prestigious awards, record-breaking sales and chart successes.

Over his extraordinary 37-year career, Aled's outstanding performances have made smash-hit box office history. He is the original crossover star, has performed for the Pope and the Royal Family, received an MBE, released over 36 albums - with over 10 million album sales and has over 40 silver, gold and platinum discs.

After beginning his career at the age of 12, Aled became one of the world’s most successful boy sopranos, releasing 12 hit albums in 4 years with the defining moment being ‘Walking in the Air’, the hit song from the family-favourite, Christmas animated film ‘The Snowman’.

Aled has also forged an extensive career as a TV & Radio presenter, with his own shows across BBC Radio 2 & 3 and BBC Radio Wales. He hosts the most listened to show on Sunday on Classic FM and has been a firm favourite presenting BBC1 Songs of Praise for nearly 20 years.

Aled continues to record and perform alongside his radio and TV career.  He made world history with his album One Voice, where he duetted with his younger boy voice, reaching no.3 position in the UK Official Album Chart in 2016 and selling more units in the first week of sales than former One Direction’s Zayn Malik.  He held the no.1 spot on the Classical Chart for 14 weeks - gaining silver BPI status.

Later that year One Voice at Christmas shot to no.1 in the Classical Chart, making One Voice and One Voice At Christmas the 2 top selling classical albums of 2016 in the UK.

Aled rounded off 2017 with the final instalment of his One Voice album trilogy – One Voice: Believe, going straight to No 1 in the Classical Charts back at home in the UK.

In November 2018 Aled teamed up with Russell Watson and released a stunning new album together, In Harmony which entered the UK album charts at No 8 and was the biggest selling classical album of 2018.