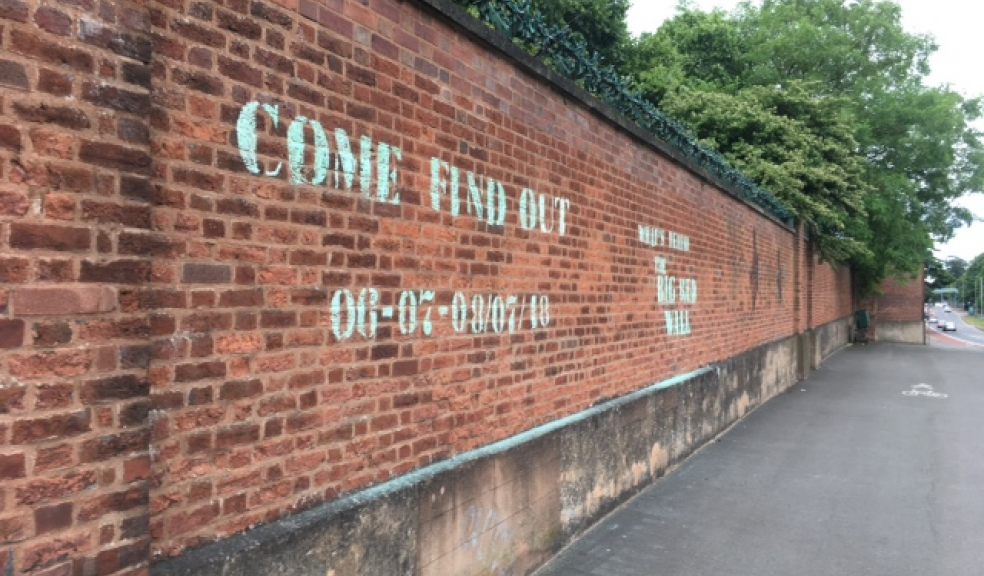 A graffiti artist has been at work in an unexpected place - the high red-brick wall surrounding Exeter's Wyvern Barracks.

The graffiti has appeared on the otherwise featureless wall along Topsham Road, near the main gates.

But this isn't an attack of hostile vandalism on the important military base. The graffiti artist, Max Nettleton from Exeter College, was invited by the Barracks' Commanding Officer to decorate the wall using removeable paint, to publicise the big event taking place there at the beginning of July, ‘100 Years Behind the Red Brick Wall'.

For the first time, the Barracks is being opened to the public for a series of three open-air concerts on July 5th, 6th and 7th. The first two nights will be headlined by the multi-award winning local acoustic-folk band Show of Hands, and all three nights feature music by the Dartmoor folk choir The Lost Sound.

The concerts, also featuring music by military bands, will tell the story of Wyvern Barracks from 1918 to the present day and its involvement in WW1, WW2, and the more recent conflicts in Iraq and Afghanistan. It will also trace the evolvement of the 6 Rifles battalion, through the amalgamation of the Devon and Dorset regiments in 1958, and the creation of the large Rifles regiment through a further merger in 2007.

Mr Nettleton's striking graffiti, bound to catch the attention of the thousands of walkers and motorists who pass the Barracks every day, includes ‘Tommy' soldier silhouettes, and the words ‘Come find out what's behind the big red wall.'

Tickets for the concerts are priced at £6 for adults, and £4 for concessions (children, OAPs, students and members of the Armed Forces). A family ticket for two adults and two children is £18.

They are available from the Exeter Tourist Information Centre and the Guildhall, or online at https://www.eventbrite.co.uk/e/wyvern-18-tickets-44215834752