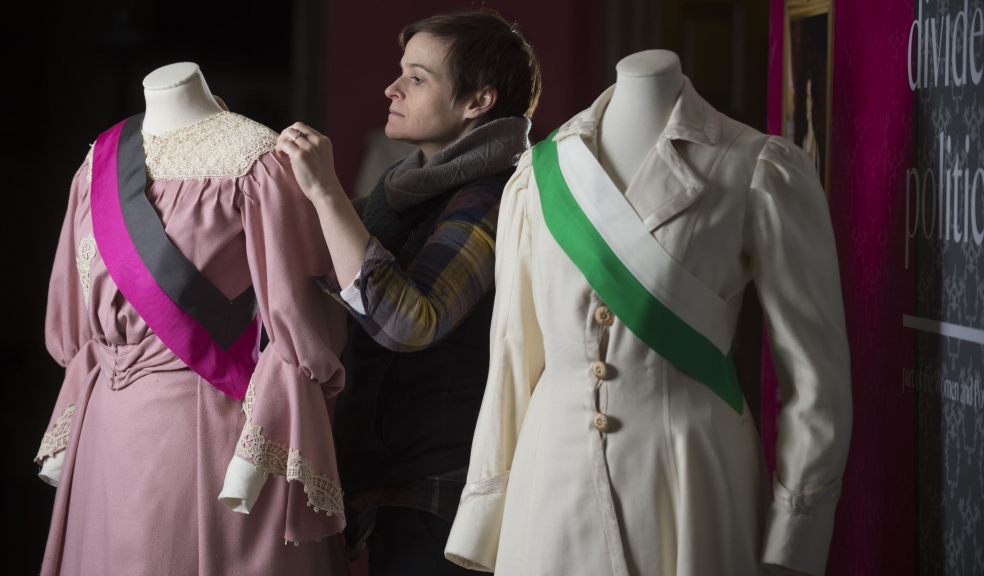 ‘Many suffragists spend more money on clothes than they can comfortable afford, rather than run the risk of being considered outré and doing harm to the cause’ Sylvia Pankhurst

The fashion collection at Killerton has opened its doors for 2018 with a new exhibition called Branded: Fashion, femininity and the right to vote. To mark 100 years since some women got the right to vote, the exhibition reflects the timeline of the campaign for women’s suffrage from 1866 until 1928 through the changing styles of fashion.

The exhibition highlights the relationship between politics and dress and how this was exploited by the campaigners and supporters of women’s suffrage. Groups involved in the campaign used design and colour to identify themselves and to raise awareness and support for their cause.

Shelley Tobin, Costume Curator at Killerton said, ‘There were over 45 different organisations campaigning for votes for women at the turn of the 20th century. The purple, white and green combination is perhaps the most memorable of the colours associated with the suffrage movement. This exhibition will show how organisations like the Women’s Social and political Union founded by the Pankhurst’s used colours and branding to identify, unite and support their campaign.’

The exhibition showcases items from the collection at Killerton, along with film clips from British Pathé, photographs from national collections, and objects lent from local collections in the South West.

Items include suffragist Eleanor Acland’s spectacular hand-embroidered couture wedding dress, made by Nicaud of Paris (on loan from the Royal Albert Memorial Museum, Exeter); a walking dress of Queen Victoria’s which has recently been conserved for Killerton’s fashion collection; and Nancy Astor’s parliamentary suit (on loan from Plymouth Museum and Art Gallery), who was the first woman to take her seat in parliament in 1919.

The fashion exhibition sets the national context for Votes for women? an exhibition on the ground floor of Killerton house on 2018. Votes for women? tells the story of two generations of Acland Women who were at the heart of the fight for votes for women, but on opposing side’s campaign. Gertrude Acland was the chair of Exeter’s anti-suffrage league whilst her niece, Eleanor Acland was the vice-chair of the South West branch of the National Women’s Suffrage Society. Gertrude hosted anti-suffrage garden parties at Killerton whilst Eleanor, a nationally prominent suffragist, led a liberal campaign for women’s suffrage.

Votes For Women? And Branded: Fashion, femininity and the Right to Vote are part of the National Trust’s Women and Power national programme. Killerton will be hosting a series of events throughout 2018 as part of the programme including a partnership with the National Portrait Gallery. Please visit www.nationaltrust.org.uk/killerton for all the latest information, news and timings.