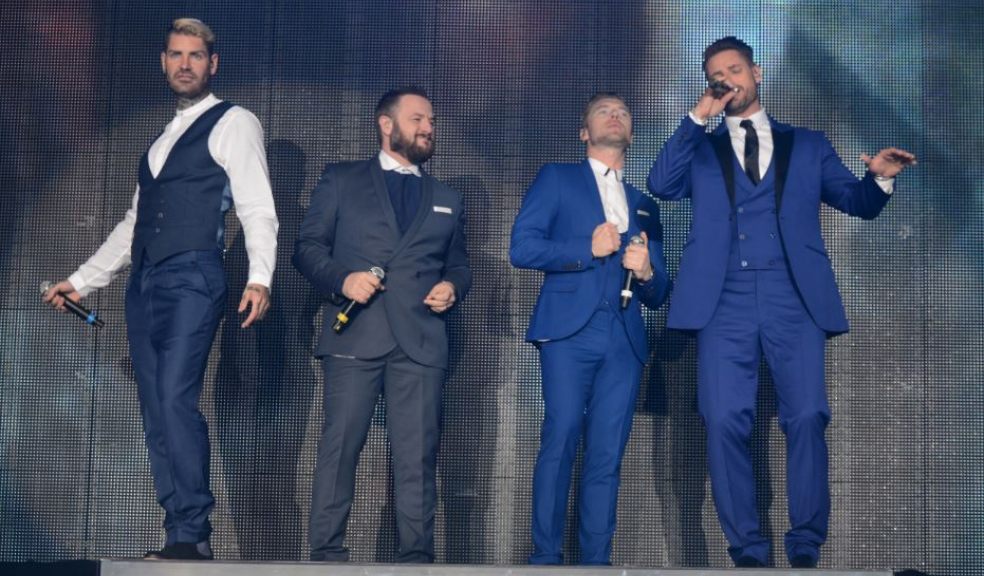 The sun shone as over 7,000 fans came from all over the country, including places as far as Germany, to go back to the nineties and watch Boyzone perform some of their most popular songs from their 20 year career.

Their only performance in the South West this year, Ronan Keating, Keith Duffy, Shane Lynch and Mikey Graham wowed the crowds with an energetic performance on the night. Performing a variety of songs including ‘Love Me For A Reason’, ‘When the Going Gets Tough’, ‘Picture of You’ and ‘No Matter What’, the band also performed songs from their latest album ‘Dublin to Detroit’, featuring covers of their favourite Motown songs.

The show also included a touching tribute to Stephen Gately before finishing with a lively rendition of Ronan Keating’s ‘Life is a Rollercoaster’.

Boyzone were supported on the night by Britain’s Got Talent and Strictly Come Dancing judge Alesha, who kicked off the evening’s entertainment performing a number of songs including her new single ‘The Way We Are’, which was released on Sunday 21st June, as well as some of her hits such as ‘The Boy Does Nothing’, ‘Drummer Boy’ and more. Alesha started the evening in style, even inviting some on stage with her during her performance.

Arabella Smith, a local fan from Newton Abbot, spoke about the concert: “I’ve been a Boyzone fan since I was really young and, as my mum likes them as well, I decided to treat her to tickets for the show for Mother’s Day.

“I actually couldn’t believe it when I heard that such a well-known group were coming to Newton Abbot Racecourse so I jumped at the chance to see them locally. As we’re so close to the racecourse, it was great for us as we were able to walk there on the day.

“We enjoyed the whole show but I especially enjoyed the Motown section. It was really upbeat and the amount of space there made it easy to enjoy a dance. There was plenty of room for everyone.

“We’d love to go to more shows at the racecourse. It was a great evening and well-organised and we both had a brilliant time.”

Patrick Masterson, Managing Director of Newton Abbot Racecourse, spoke about the concert: “For our first concert held at the racecourse, it was an amazing achievement for all involved. It was wonderful to see all the hard work over the last few months come to fruition on the night. To see everyone enjoying themselves and singing along to Alesha and Boyzone just shows how well the evening went.

“We’ve been inundated with great feedback from the night and people are already asking what’s next for the racecourse in terms of concerts. Now that we’ve seen just how Newton Abbot and the surrounding areas responded, you never know.

“We’d like to say a huge thank you to Boyzone and Alesha for joining us on the evening and for everyone who helped make the evening a huge success.”

Racing returns to the racecourse on Friday 3rd July with racing starting at 14:10 and gates opening at 12:10. The last race is at 17:30. Tickets are priced at £18 for Paddock Enclosure and £12 for the Course Enclosure. Tickets can be bought online until 17:00 on Thursday 2nd July and will be available at the gate on the day.

Children aged 16 and under and students with a valid photographic student ID / NUS card can enjoy free entry to the racecourse. The racecourse also offers entry to disabled racegoers and one carer for just £12 each with a free transfer to the Paddock Enclosure.