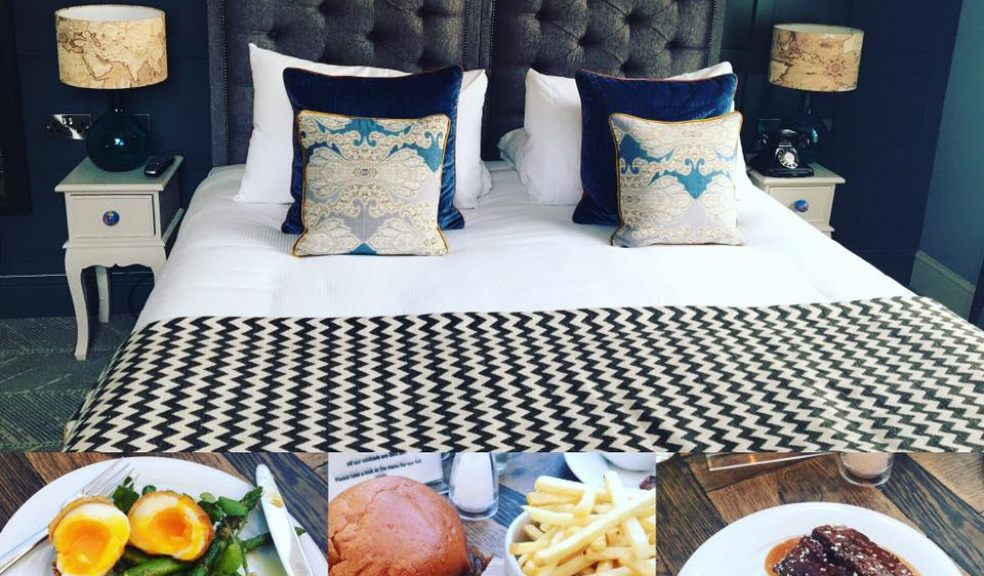 Exeter just wouldn’t be Exeter without the iconic City Gate Hotel, which is why I was thrilled to be invited to stay following the extensive three month revamp.

Despite living in Exeter, my husband and I were determined to get the full tourist experience and arrived by train into the City Centre. The signs do not lie and the City Gate is a five minute walk from Exeter’s Central Station. Situated right into the town, but not too close to the shops and restaurants that you get all the noise, the hotel is also near to St David’s train station, various bus and taxi stops and the A30 and M5.

The City Gate’s makeover was clear to see immediately on arrival. The hotel, which is part of the Young & Co’s Brewery chain, once had a faded Cream and Red entrance. This has been replaced with a more modern Dove Grey look, and what is now the hotel’s reception was once none other than a fridge and storage room.

We stayed in one of the 14 individually designed boutique rooms overlooking the Iron Bridge the hotel building has been situated on since the 1700s. Whilst the views from our room weren’t great (we were staying in a city centre hotel after all), the décor in the room and in the hotel overall was stunning. The revamp has given the hotel a much needed chic, crisp and clean look and fans of the establishment’s ‘Secret Garden’ will be glad to hear the Alice In Wonderland theme has moved indoors with ‘eat me/drink me’ signs plastered on the complimentary goodies.

Inside and out the City Gate Hotel is now showing itself to be the place to go for a modern getaway. Situated a walking distance from the Royal Albert Memorial Museum, various theatres and shops and bars, it is establishing itself as the place to stay for a shopping weekend with the girls or a business meeting. Our hotel room was stocked with a Nespresso coffee machine, bottled water, wine, port, fudge and a flat screen TV equipped with Sky. If that wasn’t enough there was also a goody draw and a decent working hairdryer!

Despite the room being so well stocked that we didn’t really need (or want) to leave it, I was advised by a member of the City Gate team that they do the best burger in town, so we decided to give the restaurant a go. As mentioned previously the hotel is situated near various shops, restaurants and pubs, but I would certainly recommend eating within the hotel, especially if you are staying for more than one evening.

There is nothing worse than a small and fancy meal that leaves you sneaking up to McDonald’s within five minutes, which is why the City Gate Hotel does not disappoint. The food is cooked in the hotel’s new kitchen, where you can see the chefs at work. 8oz 28 day aged steak and Young’s cod are just some of the highlights, in addition to various chef specials.

Whilst sitting in the hotel’s bright and airy conservatory, I tried Wye Valley asparagus, crispy egg, capers and a shallot dressing to start my meal and I have to say, it may be my favourite out of the three courses I consumed. The starter was just the right size, and the crispy egg (think a big scotch egg with a gooey inside) was cooked perfectly.

Despite being packed with yummy ingredients (gherkin, Young ale onion and maple stout bacon being just some of them), I wouldn’t say the City Gate burger is the best in town. The ingredients inside caused the bun to become a bit of a soggy mess. Although the burger was nice, its one I wouldn’t recommend eating with a face full of make up on or with business associates in tow.

A dish I definitely would recommend is the warm sticky toffee pudding, which came complete with a dollop of clotted cream. In addition to being priced at just £5.50 (the whole menu is extremely good value for money) the dish was extremely tasty and served in just the right amount that I didn’t have to waddle out to the secret garden!

The hotel’s secret garden, named due to its sheltering trees and cosy nooks and crannies, has been a much loved part of the establishment by locals and visitors for many years, so I was glad to see the changes made to it were definitely for the better.

The old fountain and sticky benches have been replaced with new garden furniture, and the hotel has modernised its outdoor area with an outside bar and burger shack now available, perfect for those sunny evenings. Decorated in a bright graffiti style, the secret garden is set to have even more of a summer vibe over the coming months, with our extremely kind and friendly waitress advising a sandpit is in the pipeline.

After a lovely evening sitting in the hotel’s secret garden, it was time to see if a hotel situated in the city centre could offer a quality good night’s sleep.

Following a dip in the room’s rather large tub and after slathering myself with their complimentary Algotherm goodies, I was pleasantly surprised to discover the bed wasn’t two single beds pushed together as you find in so many hotels these days, but a comfy double laden with cosy pillows, cushions and crisp sheets.

Despite being in a city centre location, the noise level is fairly moderate in the hotel until Exeter gets moving at about 7am, so after a good night’s sleep it was time to try another of the hotel’s dishes. The City Gate hotel’s breakfast choices can only be described as agonising. This is because there are so many delicious options to choose from it is just painful. The mouth-watering breakfast menu features everything from a gut-buster City Gate Full English, to porridge showered with fruits.

A couple of dirty glasses at breakfast and a slightly wonky lampshade are my only criticisms of the City Gate Hotel. Every member of staff, from the waiters to the housekeeping team were polite and courteous. The revamp has given the hotel an incredibly modern city vibe and I really did not want to leave at the end of my stay! I would definitely recommend the hotel to those wanting to experience the best the city has to offer.

For more information or to make a reservation visit www.citygatehotel.com