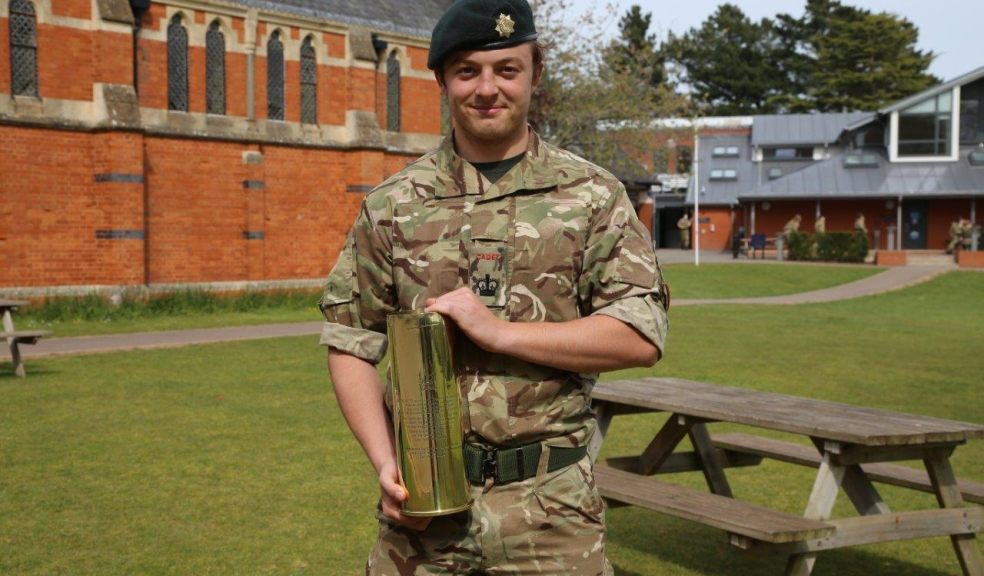 An Exeter School Sixth Former has been awarded the Jack Sadler Award for his outstanding contribution to the Combined Cadet Force contingent (CCF).

WO2 Stan Hart was presented with the brass trophy of an artillery shell case and an engraved medal by Contingent Commander Sqn Ldr Simon Smale on 7 May during a CCF awards ceremony.

The Jack Sadler award is made annually in memory of former pupil and trooper Jack Sadler who was tragically killed in Afghanistan.

Jack was a popular and respected senior member of the Army Section who was very much viewed as a soldier’s soldier.

Stan has represented the school on a number of ceremonial duties as the Lord Lieutenant’s cadet. He has been awarded a prestigious army scholarship and has passed the selection board for officer training at Sandhurst.

Stan is interested in joining the Royal Marines or Army following his A Levels.

Sqn Ldr Simon Smale said: “As Army Section senior cadet Stan has been an excellent role model to younger cadets and has consistently proved that he is competent, reliable and hard working.

Stan said he was delighted to receive the Jack Sadler award concluding his time at Exeter School CCF.

“I have thoroughly enjoyed every CCF session and recommend that anyone given the opportunity to participate in CCF seize it with both hands. Jack Sadler is a credit to Exeter School and to receive an award named after him is a huge honour.”