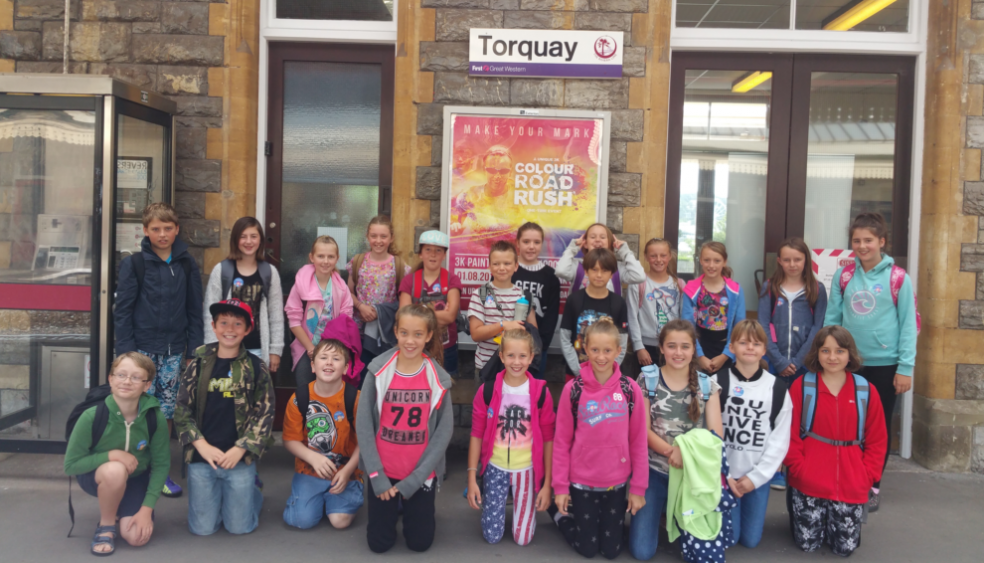 Pupils from Starcross Primary School recently took a free train trip on the Riviera Line to visit the Riviera Centre in Torquay.

The trip was organised by the Devon and Cornwall Rail Partnership in conjunction with First Great Western.  The Year 6 children had chosen to visit the wave pool at the Riviera Centre as their leavers’ trip.  Having been given a budget for the trip by Starcross Primary School Parents, Teachers and Friends Association, they had been asked to research options, find the cost for each one and then vote for their favourite activity.

Tamsin Vanderford, Year 6 teacher at Starcross Primary School said: “The children were delighted when they were told that they would be able to take a free train trip, as it meant that their budget went much further!   They went swimming and played bowls, tennis and pitch & putt. The children thoroughly enjoyed the train journey, especially looking out for landmarks along the coast as we passed Dawlish and Teignmouth.”

Celia Minoughan, Riviera Line Project Officer from the Devon and Cornwall Rail Partnership, said “We were delighted at the children’s enthusiasm for travelling by train. Some of them hadn’t been on the train before. A great day out! They are now planning more train trips with their families during the school holiday.”

The “Train trips for schoolchildren” initiative is part of the EU Citizens’ Rail project led by the l Partnership which is working to develop the Riviera Line, which links Exeter and Paignton, in a variety of ways, including by getting more people involved at the line’s stations.

South Devon Station Manager Ian Mundy said "This Citizens’ Rail scheme is a great way to encourage local children to use our railway safely and confidently.”

The Devon & Cornwall Rail Partnership is a non-profit partnership between local authorities and the rail industry which works to promote local railways in the two counties.

More information about trips for schoolchildren on the Riviera Line and the Citizens’ Rail project can be obtained from Riviera Line Project Officer Celia Minoughan at the Devon & Cornwall Rail Partnership on 01752 584777, at celia@citizensrail.org or by visiting www.citizensrail.org  .