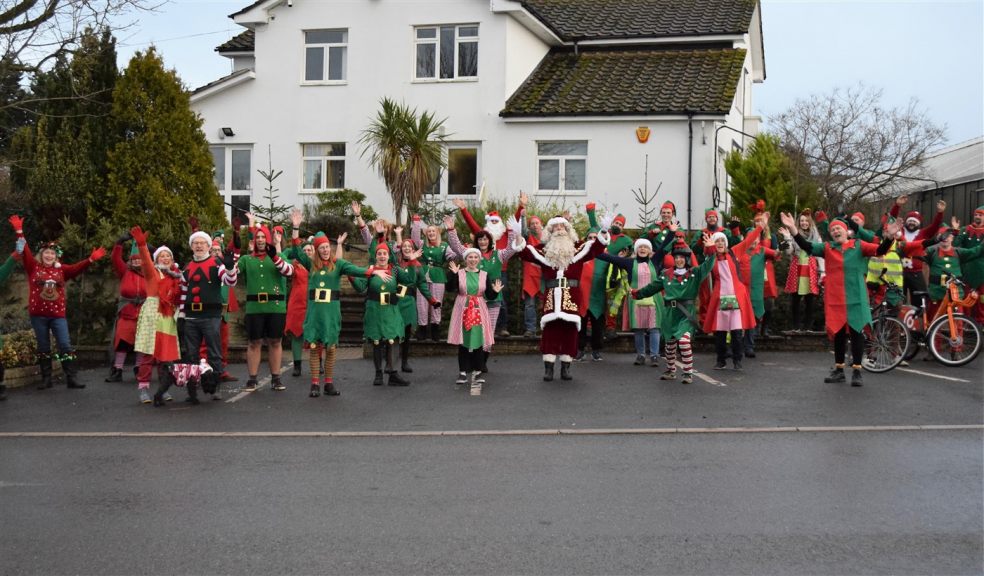 It was “hi-ho hi-ho” all the way as a collection of ‘elves’ cycled, jogged and walked to work at Otter Garden Centres in Ottery St Mary in memory of their colleague Rob Gillingham who passed away from a brain tumour earlier this year.

They were fundraising for Brain Tumour Support, a charity that helps those affected by any type of brain tumour, not just patients, but also their families, friends and carers.

The 43 team members who took part were met at the garden centre by the big man himself, Santa. Mince pies and hot drinks were ready for their arrival to thank them for their efforts. Many of the team carried on with their elf antics throughout the day, remaining in costume to the delight of customers visiting the garden centre.

Otter Garden Centres Managing Director Jacqui Taylor also donned an elf outfit to cycle into work. She got behind the fundraiser on behalf of the business by pledging a £50 donation for each of the team members who took part, adding £2,150 to the pot. Jacqui said:

“Rob was a valued, popular member of our team, and well known as the driver of our grotto’s ‘Santa Express’ train each year; it’s an honour to fundraise in his memory.

“Although our grotto isn’t open this year due to the pandemic, seeing so many elves at the garden centre really gave everyone a boost of festive cheer!”

Volunteer fundraiser from Brain Tumour Support Jeanette Hackwell who organised a collection on the day added: “It was such a successful day and a lasting tribute to Rob.

“The funds raised will go a long way to keeping the charity active, especially after the impact of Covid-19.”

Jeanette and her team, all of whom have or have had brain tumours, collected £250 from generous garden centre customers, swelling the total further. Brain tumour survivor Helen Patterson - the inspiration behind the fundraiser - cycled 30 miles to the garden centre in her elf outfit, raising over £500 which she split between Brain Tumour Support and Alzheimer’s Society.

Together with the amount raised by the festive Otter elves and the collection on the day, the total raised so far for Brain Tumour Support is well over £3,500.