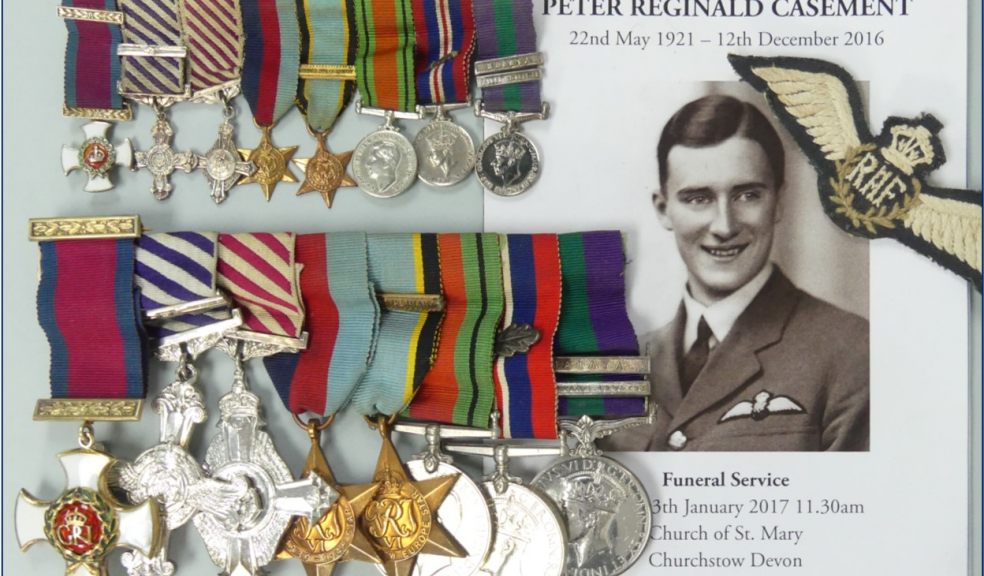 An important group of WW2 RAF medals and associated log books, various documents, uniforms and photographs are to be auctioned at Chilcotts in Honiton.

The medals, a Distinguished Service Order, Distinguished Flying Cross and Bar and Air Force Cross group of eight were awarded to Peter Reginald Casement who flew with both Bomber Command and Coastal Command. The medal group includes a ‘Mentioned in Dispatches’ oak-leaf and campaign clasps for France and Germany, Malaya and Palestine 1946-48 along with the set of miniatures and three original medal boxes.

Group Captain Peter Casement was one of the few pilots to have seen service throughout WW2; he took part in many strategically important missions during the war. During the Battle of the Atlantic the bomber he piloted was the first to bring back photographic evidence of the sinking of a U-boat. The British national press celebrated by printing the four photographs together with minute-by-minute accounts from the Air Ministry News Service. These historic photographs plus his handwritten descriptions are in an album included in the lot.

During his active service, not only did Peter update his log books as required but he also wrote detailed accounts of many of his sorties. Auctioneer, Duncan Chilcott explained:

“The combination of medals is rare in itself, but it’s the fact that they were awarded to a pilot with such an extraordinary WW2 service and are being offered with an extensive archive of materials to accompany them that gives this such historical significance.”

The medals and associated memorabilia, which includes his flying jacket, gloves and boots, several sets of uniform, photographs and RAF training manuals, are being sold as one lot by Peter’s family. The auction estimate is £10,000 to £15,000*.

The sale is on June 1 at the Silver Street sale room in Honiton, close to Honiton Community College. Viewing is on Thursday, 9:30am to 5pm, Friday 9:30am to 7pm and on Sale Day from 8:30am. The sale starts at 10:30am. Viewing and live online bidding will also be available via the-saleroom.com