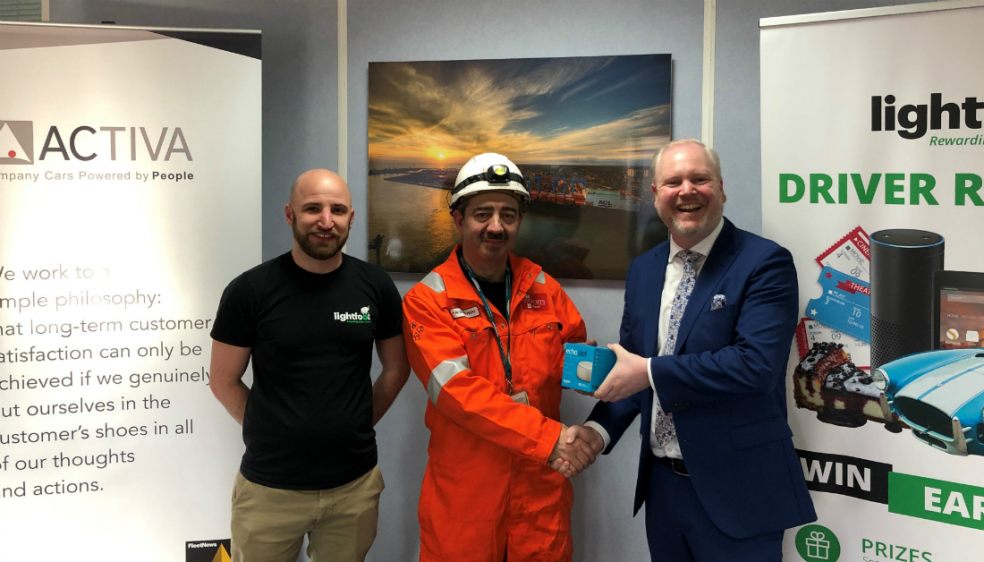 Each week a driver is rewarded with a great prize, encouraging others to excel. Currently more than 2,200 drivers are eligible for the weekly draw with the number of company car and van drivers increasing all the time as more of Activa Contracts’ fleet customers recognise the benefits of fitting vehicles with Lightfoot.

In addition to improving the safety and welfare of drivers, Lightfoot reduces at-fault accidents in fleets by up to 40%.  It also lowers fuel and emissions by 15-20%, and significantly cuts wear and tear as well as vehicle downtime.

Commenting on his win, Mr Peers stated: “I drive the same on site as off the site – I always try to be safety-conscious and I’m no speed king, so it’s nice to have a reward for it. The Echo Dot sits next to my television and when we don’t know the answer to a question, we just ask Alexa. It’s like having a talking encyclopaedia. Brilliant!”

Launching the Activa Contracts Lightfoot Drivers’ League at the start of 2019, Lisa Temperton, Sales and Marketing Director at Activa Contracts, said the company was “delighted to be supporting safer, smoother fleets with the prizes we are offering through Lightfoot.”

The goal was simple: to reward high-performing drivers from mutual clients of the companies to further incentivise smoother, safer driving. Following the announcement of the first winner of the Sponsored League, Activa Contracts and Lightfoot will continue to award prizes each week to drivers who have achieved Lightfoot’s ‘Elite Driver’ standard. To reach Elite Driver standard, drivers need to achieve a weekly average score of 85% or above for efficient driving.

Peel Ports, which owns facilities in Clydeport in Scotland, Great Yarmouth, Heysham, Liverpool, London Medway and the Manchester Ship Canal, as well as operating a terminal in Dublin, boasts a 190-strong vehicle fleet. Activa Contracts has had a relationship with Peel Ports for many years, supplying vehicles on contract hire and managing the fleet via a fully outsourced arrangement.

Ms Temperton added: “The team at Peel Ports Group is incredibly focused upon safety. Therefore, it is no surprise that one of its drivers has won the first ever Activa Driver award. Congratulations to Paul!”

Lance Weissenborn, Operations and Engineering Director at Peel Ports, commented: “Installing Lightfoot in our fleet has been beneficial in a number of ways. We are improving health and safety by encouraging safer driving and are also seeing reduced fuel consumption and emissions from our vehicles and we are rewarding our drivers for driving better. Paul’s win in the Activa Contracts Drivers Sponsored League is just reward for his consistency when operating our vehicles.”

Rupert Lyon Taylor, Managing Director of Lightfoot, added: “Paul is the kind of driver every fleet manager wants – committed to driving safely and conscious of their responsibilities when behind the wheel. Drivers like Paul deserve rewarding and this is exactly why we do what we do. The dedicated Activa Contracts Lightfoot Drivers’ League is a great example just of how effective this approach can be. We hope that, as we reward more and more drivers, we will see even higher Lightfoot scores from our mutual clients.”